Fernand Leger at the Philadelphia Museum of Art
By Leo J. O’Donovan
Arts 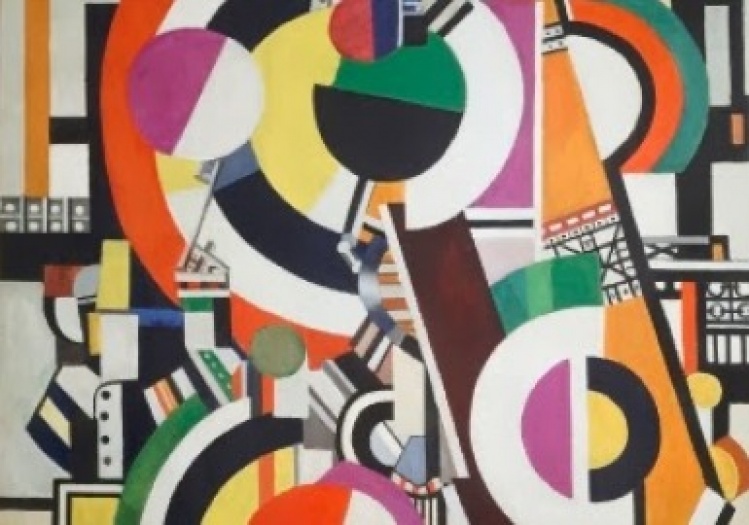 One of the revelations at the New York Museum of Modern Art’s “Inventing Abstraction” exhibition earlier this year was a wall of early work by Fernand Léger. Three oils, painted with strong primary colors, black lines and patches of white, showed tumbles of ovoid and box-like forms that seemed to dance into the viewer’s space. They came from Léger’s Contrast of Forms series of 1913 and suggested a brilliant attempt to render musical sounds. Further on in the show a later painting, Disks (1918), revealed the artist developing an even more original gift for intense and evocative abstraction. I wondered whether this legendary figure, relatively neglected by recent critics, might be about to receive his due.

Now it has happened. In a vigorous and superbly contextual show, “Léger: Modern Art and the Metropolis”—at the Philadelphia Museum of Art through January 5—curator Anna Vallye has focused on the most experimental years of the artist’s life, from 1918 through the mid-1920s. Léger is the show’s central figure, and The City, his major statement of 1919, its central work, but the many artists whom the highly gregarious Léger met in Paris are also strongly represented, as are the interests he shared with them: the hectic course of urban life; the circus; mass media; graphic design; theater, and, in a special way, cinema.

Born in 1881 to a farming family in Normandy, Léger studied architecture, then moved to Paris in 1900 and worked there as an architectural draftsman. Rejected by the École des Beaux-Arts, he enrolled at the School of Decorative Arts and began to paint independently in 1905. Like much of the rest of Paris, he was stunned by the Cézanne retrospective of 1907. Relocating to Montparnasse, he joined the company of avant-garde artists such as Jacques Lipchitz, Jean Metzinger, Albert Gleizes, Henri Le Fauconnier, Robert and Sonia Delaunay, Francis Picabia, and the Duchamp brothers—all of whom are present in Philadelphia. Early on he also met Piet Mondrian and, later, his lifelong friend the architect Le Corbusier.

In the pre–World War I years, Léger was identified with the Cubists and continued largely in that vein through Acrobats at the Circus and the patriotic Bastille Day at Vernon (both 1918). But his two years as a soldier on the front lines of battle affected him deeply. “The crudeness, variety, humor, and downright perfection of certain men around me… in the midst of the life-and-death drama we were in,” he wrote, “made me want to paint in slang with all its color and mobility.” Putting the abstract art of 1912–13 behind him, he set to reconsidering everything—subject, palette, and method.

What resulted was The City, a 7 ft. 7 in. x 9 ft. 9 in. oil for which Léger did fourteen careful studies (all reproduced, for the first time, in the show’s catalogue). With its spectrum of vivid colors, the final work presents abstracted forms of modern life pressed together—posters and railroad trestles, billowing factory smoke, the zigzag of electric current, stenciled lettering, silhouetted figures descending a staircase. A rose-colored column to the viewer’s right is balanced by a series of smaller vertical forms to the left, but there is no single focus, just as there is no horizon. The longer you look, the more throbbingly alive the painting seems—and the more powerfully it pushes forward toward you.

Léger and his colleagues rejoiced in the new publicity of the postwar years and the energy of mass media. His friend Blaise Cendrars recommended to fellow poets the “lyricism” of advertising as the “finest expression of our time.” “The view through the door of the railroad car or the automobile windshield, in combination with the speed,” Léger had written in 1914, “has altered the habitual look of things. A modern man registers a hundred times more sensory impressions than an eighteenth-century artist.” Soon he became known as the father of the contemporary French poster, and one section of the Philadelphia show gathers graphic material and posters from artist friends alongside paintings by Léger inspired by machinery. The latter include the homage of Typographer (1919), the severe Mechanical Element (1924), and the softly poetic Scaffolding (1919).

Part of the postwar excitement was cinema—for which Léger almost abandoned painting. You could easily spend half your visit to “Modern Art and the Metropolis” watching the films Anna Vallye has put on display. René Clair’s Entr’acte (1924), with screenplay by Picabia and score by Erik Satie, is here, one of Parisian Dada’s most hilarious moments. So too is Abel Gance’s eight-hour tribute to the railroad train, La Roue (1922), with a marvelous poster by Léger. Also Man Ray’s Return to Reason (1923), Marcel Duchamp’s hallucinatory Anemic Cinema (1926), and Marcel L’Herbier’s L’Inhumaine (1924), for which Léger did the set designs. Best of all, though, is Ballet Mécanique (1924), a plotless helter-skelter, made by Léger and the American director Dudley Murphy, that builds a Hitchcock-like suspense, sets wine bottles dancing, pays loving tribute to Charlie Chaplin, and plays bewilderingly bold tricks with face-shots of the entertainer Kiki de Montparnasse.

Modernist theatre and architecture had passionate supporters in Léger and his fellow artists. In a coup de théatre the exhibition includes the enormous reconstructed backdrop he designed in 1921 for the Ballet Suédois’s Skating Rink, with seven of his saucy costume designs in front of it. Nearby are several impressive pieces by Alexandra Exter, with whom Léger taught at the free studio he had opened with Amédée Ozenfant in Paris in 1924. His interest in architecture, spurred especially by conversations with Le Corbusier, led him to make “mural paintings” such as The Large Tugboat (1923), a severely abstracted “landscape,” and entirely abstract decorative pieces such as Mural Composition (1926), meant for a contemporary building. “Of all the painters working today,” wrote Le Corbusier, Léger is “the one whose paintings demand a new architecture.”

In her long and learned introduction to the show’s catalogue, Vallye argues that The City deserves to be considered on a par with Picasso’s Les Demoiselles d’Avignon of 1907, today generally regarded as the key work ushering in the twentieth century. Only slightly smaller than The City, the Picasso canvas famously presents five women in a Barcelona brothel treated with varying degrees of disfigurement. The effect is assaultive, savage, and unsettling. Léger’s enactment of his archetypical metropolis, on the other hand, is bold and brash, fairly bursting from its crowded canvas. One painting is interior and anxious, the other exterior and exuberant. Suggesting their complementary contributions, Vallye writes that they “posit contrary subjectivities: the one enveloped in the privacy of the self, the other pulverized and blown out across the streets.”

The case is well made. But in my view it would be more persuasive still if Vallye would include a third great early-century work in her argument for the modern manifesto—namely, Henri Matisse’s Bathers by a River, another very large painting (about 8 ½ x 13 feet), now in the Art Institute of Chicago. “Finished” in 1917, after successive reworkings over the course of eight years, the painting shows four highly abstract figures: two among green palms to the left of a black band of river; and two to the right, against a practically barren background with a snake rising from below. This is our condition, the four massive figures in their infected Eden tell us. In a version of the Golden Age theme they are at once together and alone, idyllic but exiled, Cycladic figures torn from their time into a century of terrible conflict—but still of hope for the human.

Matisse’s fractured traditionalism and desperate hope for beauty adds something inestimable to the vision of his great younger colleagues, it seems to me, making claims for their eminence even more urgent—and balanced. Modern life both reflected and required not only Picasso’s formal intensity and Léger’s committed populism, but Matisse’s openness to the mythic as well.