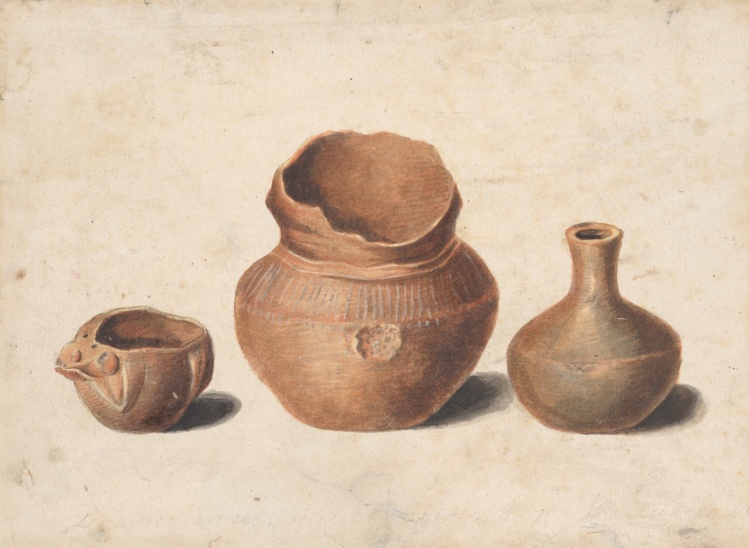 American Indians have always served a largely symbolic purpose for most Americans. They have represented savagery, or primitive innocence, or the potential of the American frontier. But always they have represented something other than themselves. Except as the rest of us see ourselves reflected in them, they are mostly invisible to us. 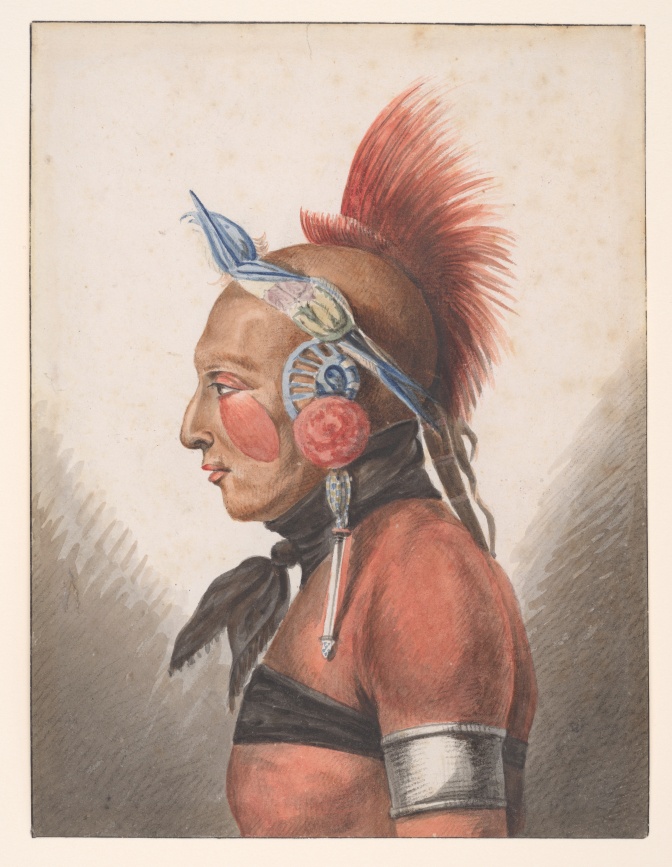 Many Europeans got their first glimpse of an American Indian when he or she was in captivity, like the Munsee-Delaware man called Jacques who in 1644 was exhibited in Amsterdam as a curiosity. In allegorical representations of the Americas, European artists often presented a Hellenized figure with bow and arrows, naked or in plumed headdress and skirt. Early popular illustrations of American Indians were full of exaggerations and outright fabrications. When the Russian diplomat Pavel Petrovich Svin’in published his 1815 A Picturesque Voyage in North America, he updated existing watercolors of an Osage delegation to include facial tattoos, nose rings, and garish body paint. Evidently he felt the real Indians were not quite Indian enough for his readers.

Artists of the first American century combined these two symbolic traditions in their depictions of the Noble Savage. The Indians depicted by landscape painters like Thomas Cole are little more than foils for the legend of American progress, their teepees and primitive superstitions no match for those visible markers of imperial capitalism: the railroad, the telegraph, and the stagecoach. We see the Indians as if they had been overrun by history itself—their defeat honorable, even noble, but always inevitable.

Those who visit the Metropolitan Museum of Art’s American wing for Artistic Encounters with Indigenous America (on view till May 13) will find themselves swept along by this narrative as it makes camp at the base of Albert Bierstadt’s mammoth Rocky Mountains, Lander’s Peak and slumps, broken, in bronzes by James Earle Fraser or Frederic Remington. Working as the Plains Wars drew to an end, these artists depict Indians in attitudes of pastoral splendor or futile defiance. The reality of Native American life in the second half of the nineteenth century and the beginning of the twentieth—reservations, residential schools, programs of cultural and religious “improvement”—are literally outside the frame.

The Met, along with other major institutions like the Smithsonian, has recently tried to expand our picture of American Indian life by coupling the work of artists like Fraser and Remington with that of native artists. The Met’s curators have juxtaposed items from their permanent collection with major turn-of-the-century Indian works, like the stunning black-on-black ceramics of Maria and Julian Martinez. The curators have also erected a number of “Native Perspectives” placards in which native artists explain their often complex relationships with iconic and canonical works.

Overlapping with Artistic Encounters with Indigenous America is the Met’s Art of Native America (on view till October 6), the largest-ever show of its kind to be held at the museum. Drawing from the extensive collection of Valerie and Charles Diker, Art of Native America provides a millennia-spanning survey of Native American art, but its primary focus is the century-and-a-half period of major conquest. At the start of that period, Indians occupied almost the whole continent; by its end, most of them lived on one of a few hundred reservations. The 116 works on display in the exhibition represent fifty different cultures and most major indigenous art forms—everything from a basket woven in the 1930s by the Pima artist Lucy Makil to an ivory toggle from the Bering Strait region, whose surface was finely incised with a wolf’s face around the second century A.D.

If that sounds like a lot, it is. But it allows for some exciting comparisons. Visitors can see how ideas and traditions changed as they passed along trade networks. Decorative combs from the Eastern Woodlands are just a few steps away from combs from the Pacific Northwest. The sheer variety of forms and approaches shows that Native art is about much more than the repetition of a few archetypal patterns. It helps that many of the objects on display are masterpieces, from the James Bay Cree woman’s hood, adorned with intricate floral beadwork, to the rigidly expressive ritual mask of the Tlingit artist Taaw’yaat.

Many of the images on view are abstractions of natural forms. An Acomita water jar, for instance, is painted with what look like the deconstructed and idealized elements of a bird. Particularly among the Alaska Native pieces on display, an encounter with the divine is often represented by means of reduced and streamlined forms. But right next to such reductions one finds other images of striking complexity, many of which compress incredible amounts of narrative information onto a single, wearable plane. There is a Yup’ik ritual mask whose bentwood hoop represents the whole of the universe: the souls of all animals, past, present, and future, meet within its bounds, and are led by a spirit’s fingers to members of the tribe. This mask would have been worn as part of an annual ceremony honoring the animals that had fed the community and inviting them to return the following year.

American Indians have always made hard choices about every aspect of their interactions with colonists, but their options grew increasingly limited over time.
sharetweet

If you end up feeling lost as you wander through the rooms of these two exhibitions, you won’t be alone. By attempting to serve as both an overview of Native artistic traditions and a period-specific demonstration of how these traditions responded to several centuries of colonization, the Met exhibitions end up offering a curiously lopsided history of Native America. Most of the plaques describe only the use or design of an item on display, while the historical commentary from Native artists and scholars homes in on colonization. The actual extent of influence and exchange, as well as the impacts of forced religious and cultural assimilation in the Spanish colonies and American territories, is never entirely clear. Yup’ik masks celebrating survival take on a different meaning when one learns they were created in the immediate aftermath of the Great Sickness of 1900, in which many Alaska Native communities lost as much as 50 percent of their population. But you will have to learn that on your own; the exhibition doesn’t mention it.

There is an obvious solution here: a better-explained and most importantly permanent display of the museum’s Amerindian art would allow it to mount themed exhibitions that better explore, among other things, the ways in which colonial and Christian iconography made its way into traditional forms of carving and weaving. A significant number of the pieces on display were created for sale, a fact reflected in choices the artist made. Consider the Apache woman who wove her basket with representations of people and deer to make it more attractive for tourists. Two kachina dolls, representing Zuni katsina deities, are a commercial twist on a traditional ritual object. This difference of function shows.

The point isn’t that these figures represent cultural decline or sacrilege. The point is that they are just one example of the many accommodations Native Americans were forced to make in circumstances they didn’t choose. The choice to make marketable kachina dolls for tourists was in this way like the choice to send one’s children to distant residential schools or to accept individual farming plots on diminished tribal lands. As the historian Stuart Banner has argued, American Indians have always made hard choices about every aspect of their interactions with colonists, but their options grew increasingly limited over time. The objects in the Met’s Amerindian collection could help explain the complicated and often tragic processes of accommodation and adaptation, but only if properly presented.

Many of the objects on display here reflect a worldview in which even the most banal aspects of daily life are threaded with religious meaning.
sharetweet

Almost every item in Art of Native America was made to be used for one purpose or another, whether to cradle a child or retrieve a soul. Cree women wore those elaborate beaded hoods to church; He Nupa Wanica painted his shield with a thunderbird because he believed it would protect his comrades in battle.

Many of the objects on display here reflect a worldview in which even the most banal aspects of daily life are threaded with religious meaning. There is little if any division between the sacred and the profane, the religious and the secular, the symbolic and the real. When a Yup’ik dancer puts on a whistling spirit mask, they are not just acting as the spirit: they become the spirit. There is an impressive Okvic carving of what looks like a woman turning into a seal. Then again, it is entirely possible that this figure with a woman’s face and a seal’s body is not between states but is simultaneously woman and seal—an example of what the historian Calvin Luther Martin calls as the multivalent quality of many American Indian religions.

Almost nothing in this exhibition was created for aesthetic admiration alone. Whether it’s the way a Diné blanket’s lines break into daring geometric forms when placed across a person’s shoulders, or the transformation that a mask undergoes during a ritual, the full beauty of these objects has to be activated by the people who use them. One wishes those people were present. The more time one spends looking at the works on display at the Met, the more one suspects that they could only ever be seen as they are meant to be seen when used as they were meant to be used. Placed behind glass under the banner of “art,” they look abandoned.

Perhaps this is unavoidable. But surely it is not too much to ask that such objects always be presented with an account of the stories and activities that gave them their original meaning. Early in the exhibition one comes across a true masterpiece, a dagger whose handle is adorned with a shaman’s owl-eyed face, his trance state beaten onto the thin metal. According to Tlingit oral history, one day the metalsmith Saayin.aat came across a meteorite, and forged her blade from this “iron that fell from the sky.” Knowing that story makes all the difference to the viewer; it turns the object into something more than just a bit of exquisite craftsmanship. Only when all these stories are included—when the why and who matters as much as when and how—can these works be expected to change our understanding of the cultures to which they belonged.

Robert Rubsam is a writer and critic whose work has been published in the New York Times Magazine, The Baffler, America, and Texas Monthly. He is currently an M.F.A. student at Columbia University. You can follow him on Twitter at @rob_rubsam.