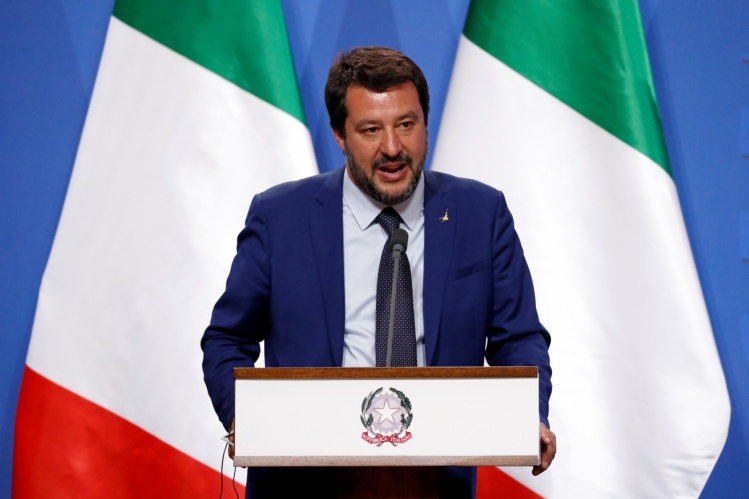 In Italian political jargon the term governo balneare, “beach-time government,” took on a whole new meaning this past summer. In twentieth-century Italian politics, governo balneare meant a government formed hastily to get through the summer, often with the same coalition of parties. Such a government was supposed to be transitional—a temporary truce between rivals. But this summer Italy’s government was brought down by seaside speeches delivered by a man in his swimsuit. That man was Italy’s interior minister Matteo Salvini, the leader of the League and the de facto strongman of the coalition government formed after the March 2018 elections.

The crisis was timed by Salvini in order to force early elections. Salvini’s plan backfired, however, when the prime minister, Giuseppe Conte, unexpectedly stood up to him. Until then, Conte had been little more than a figurehead, quietly enabling the League’s policies, especially those having to do with migration and Italy’s relationship with the European Union. But in a spectacular showdown in Parliament, Conte accused Salvini, who was sitting right next to him, of being disloyal, having a poor work ethic, and lacking respect for Italy’s democratic institutions.

A professional politician with no discernible qualifications for office, a non-practicing Catholic and a womanizer, who uses Catholicism more cynically than any politician in the history of postwar Italy, Salvini found his path toward new elections blocked by two other Catholics, each very different from the other: Prime Minister Conte, who is devoted to Padre Pio, and President Sergio Mattarella, a Vatican II Catholic and a Christian Democrat.

After a few weeks of negotiations between mid-August and early September, the collapse of the League–Five Star Movement coalition government led to a new governing coalition between the populist Five Star Movement and the center-left Democratic Party. Conte remained prime minister. It is still not clear if this is the beginning of Conte’s moral and political redemption. Educated at the Catholic-run Villa Nazareth College in Rome, Conte has until now been a moral windsock, eager to please whoever supports his place in government. What’s already clear is that his description of Salvini in Parliament was quite accurate. In Salvini’s last months as interior minister, he demonstrated a degree of hubris Italians had not seen before—not even when Berlusconi was prime minister. Salvini brandished rosaries at his political rallies, promised that he would soon have “full powers” to run Italy, and bragged, like an aspiring caudillo, about his cozy relationship with the police and security forces.

Two parties that spent most of the past six years insulting each other are now together in a coalition whose main purpose is to exclude the League from government and to postpone new elections, which would probably lead to major gains for Salvini, thanks to his anti-immigration and anti-EU stances. This new government may have the same prime minister as the previous one, but its plans are very different.

It remains to be seen how long this new coalition will be able to function. Both the Five Star Movement and the Christian Democrats are themselves coalitions made up of different political cultures. All the major political parties in Italy are in a period of internal transition. Just a few days after the Democratic Party came back to power, its last prime minister, Matteo Renzi, left to launch a new party. Meanwhile, the center-right Forza Italia will have to survive the decline of its founder, Silvio Berlusconi. Salvini’s unsuccessful gambit, which cost his own party its place in the government without precipitating new elections, could also make it harder for him to lead the League.

But the greatest uncertainty has to do with the Five Star Movement’s two camps: a right-wing, technocratic culture on one side and a leftist big-government populism on the other. The only thing these two camps have had in common is their opposition to the political establishment. A representative of the left-wing camp is Roberto Fico, the speaker of Italy’s house of representatives. On September 24 Fico hosted the first Italian screening of a new movie about St. Frances Cabrini, the patron saint of immigrants and an immigrant herself. A representative of the right-wing camp is Luigi Di Maio, who is a minister in the new government. But if both camps have representatives, neither of them has a credible leader. Five Star’s elected representatives in Parliament and in local administration have proved, almost without exception, to be disastrous. The Five Star mayor of Rome, Virginia Raggi, has turned Italy’s capital city into a health hazard for many of its inhabitants: uncollected trash, wild boars roaming the suburbs, decades-old city buses catching fire in the middle of Rome (during 2018 and 2019 more than thirty buses have caught fire while in service). The Five Star Movement, largely inspired by the popular comedian Beppe Grillo, began as a web-based protest movement in 2009 before becoming a political party. It is controlled by a consulting firm called Casaleggio, whose chairman, Davide Casaleggio, met with Steve Bannon before the most recent elections for the European Parliament. Casaleggio has unmistakably right-wing views and wants to replace representative democracy with the web. The rise of people like Casaleggio highlights the absence of a non-extremist conservative political culture in Italy—an absence that, in the last century, empowered authoritarian and violent enemies of parliamentary democracy.

The rise of people like Casaleggio highlights the absence of a non-extremist conservative political culture in Italy.
sharetweet

More immediately, the new government has to reorient its international alliances. For now at least, Italy has returned to its normal relations with the EU—striking a deal with Brussels about the redistribution of migrants arriving in Italy—but that leaves open the question of how Rome will approach Donald Trump, Vladimir Putin, Turkey’s Recep Tayyip Erdoğan, and other world leaders with important ties to Italy. In the meantime, though, Hungary’s prime minister, Viktor Orbán, has turned away from Salvini and allied himself with the neo-Fascist party Fratelli d’Italia.

This new government could turn out to be only a temporary stay against the League’s xenophobic policies and authoritarian temptations. But whatever the next elections may bring, the new coalition has already succeeded in dispelling the fear that Salvini, as minister of the interior, could continue in his liaison dangereuse with Italian security forces. It has also brought an end to the international quarantine in which Italy found itself during the short-lived government of the League–Five Star coalition. Last February, for example, France recalled its ambassador in Rome, something that had not happened since 1940.

Catholics in Italy, as in many other Western countries, are divided when it comes to immigration policy, but the Italian bishops have made sure to avoid any show of partisanship. Indeed, they have almost made a point of being absent from the political debate, except for their sporadic protests against Salvini’s cynical display of religious objects for electoral purposes. But other important voices in Italian Catholicism have not been so silent. Among the more vocal elements of the Italian church have been ecclesial movements involved with social issues and migration (especially the Community of Sant’Egidio); Catholic newspapers and magazines, which have taken a much stronger line against Salvini than secular media organizations; and the Jesuits, who have tried to give voice to the non-rightist members of the Five Star Movement and have been openly critical of Salvini and the League. In the latest issue of the Vatican-vetted magazine La Civiltà Cattolica, the political columnist Francesco Occhetta, SJ, gave a cautious but clear blessing to the new government. After the recent funeral of Cardinal Achille Silvestrini, Pope Francis took time to meet with Prime Minister Conte and gave him a rosary. This rare signal of favor suggests that many in the Vatican and among the Italian bishops see the new government as a bulwark against Salvini’s ethnonationalism.

The formation of Italy’s new government was followed almost immediately by a ruling from Italy’s supreme court that decriminalized doctor-assisted suicide while not quite legalizing euthanasia. This promises to be one of the most divisive issues in Parliament, which has for a long time refused to legislate on end-of-life issues and left the courts to deal with the issue. The same Catholic voices that have been hailed by progressives for their courage in opposing Salvini’s war on migrants could soon find themselves opposing the progressive push for laws permitting euthanasia. As this summer reminded us, in Italian politics coalitions are constantly shifting. Today’s ally may be tomorrow’s adversary.

*This article originally stated that Antonio Spadaro, SJ, gave Prime Minister Giuseppe Conte a rosary after the funeral of Cardinal Achille Silvestrini. It was in fact Pope Francis who gave Conte a rosary.