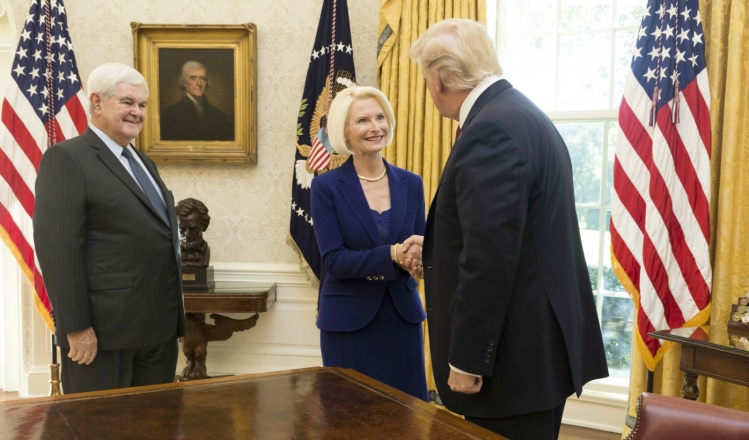 It’s been an interesting few years for Vatican-U.S. relations—ecclesially, theologically, and politically. In 2017, a new categorical wrinkle was added: the diplomatic one. Together these have led to a certain asymmetry in how the two “parallel empires” interact. And it’s unclear how this will impact the relationship in the years remaining of Francis’s papacy and Donald Trump’s presidency.

On the ecclesial front, changes in the relationship between the pope and the American Catholic Church were evident upon the election of Francis in 2013; he was a problem for the U.S. bishops and clergy even before the first synod on the family in October 2014. There were hopes that Francis’s visit to the United States in September 2015 might make for something of a “reset” in relations between the institutional arms of the U.S. church and Rome, perhaps even resulting in the kind of warm interactions the pope enjoys with many ordinary Catholics and the American people. It didn’t happen. From the reactions to Laudato si’ and Amoris Laetitia and more, it’s hard to think of another time in American Catholic history when the hierarchy so openly resisted a pope’s teachings. The bishops clearly had difficulty adjusting to a theological, ecclesial, and magisterial language so clearly different from that of John Paul II and Benedict XVI. True, the appointments and emergence of charismatic new voices like Cardinals Blase Cupich and Joseph Tobin and San Diego Bishop Robert McElroy have signaled some movement toward a church more in keeping with Francis’s approach. But the overall situation really has not changed (witness most recently the bishops’ vote for Kansas City Archbishop Joseph Naumann over Cupich as head of the USCCB’s pro-life committee).

Then, in 2016, the political relationship changed, thanks of course to the campaign and eventual election of Donald Trump, and the support he soon gained from the Republican leadership supposedly reluctant to back him. Francis had already signaled his concern (if not the entire Vatican’s) at Trump’s rise, with his statement in February 2016 that “building walls” between nations was not demonstrative of Christian character. Like almost everyone else, the Vatican was surprised by Trump’s victory that November. After all, at the time of Francis’s U.S. visit just a year earlier, there had been little sign of the forces that would propel Trump; the pope had spoken to a president, congress, and political establishment that showed no awareness of the approaching wave of anger. (It’s interesting to think about Francis’s speaking to Congress after the election of a Donald Trump.) Post-election, there was a hardening of the moral-political gap between pope and president, encompassing more than abortion and the Middle East—the usual tension-inducing issues. This rift acted to compound the ecclesial/theological one that had emerged in the previous two years.

What comes next is not yet clear, but current U.S.-Vatican relations exhibit an imbalance: there seems to be a more active Vatican “presence” here than an American one in Rome.
sharetweet

And now, in 2017, add a diplomatic component. On a beautiful Roman morning back in May, in the course of a trip that also took him to Israel and Saudi Arabia, President Trump visited Pope Francis for what was little more than a photo opportunity. A few days before that, the White House had announced the nomination of the new U.S. ambassador to the Holy See: Callista Gingrich, third wife of former U.S. House Speaker Newt Gingrich. The fact that she had received the diplomatic agrément (the consent that the Vatican grants to a newly appointed ambassador to the Holy See) in the days before Trump’s visit to Francis in May confirms the interest of the Holy See in good relations with the U.S. Gingrich was confirmed by the Senate in October and she will be received soon by Pope Francis, to whom she will present her diplomatic credentials. [[*]] In the interim, there was also the July La Civiltà Cattolica article on the “ecumenism of hate,” which aimed to define the theological-political alignment of evangelicalism and conservative Catholicism supporting Trumpism.

What comes next is not yet clear, but current U.S.-Vatican relations exhibit an imbalance: there seems to be a more active Vatican “presence” here than an American one in Rome. One example is how Francis’s pontificate speaks to America and to American Catholicism with many voices—not just a variety of Catholic voices, but also different institutional voices. There is the cohort of Francis’s U.S. bishops who act as his theological ambassadors, bearing his message to a church that to this European-born Catholic looks almost like an independent Catholic church. There is also the papal ambassador, Nuncio Christoph Pierre, who since his arrival in April 2016 has emerged as a very active public speaker and messenger of Francis. In November, Vatican Secretary of State Cardinal Parolin, who watches the U.S. carefully, arrived for a diplomatic mission that was also ecclesial (a speech to and Mass with the U.S. bishops), political (a meeting with Vice President Mike Pence), and theological (a lecture at Catholic University on Francis and Vatican II in which he also, in a manner tailored to the Catholic institutional intelligentsia, stressed the continuity between Benedict XVI and Francis in their fidelity to the council).

But where are the institutional figures of American Catholicism on the other side of the Atlantic? Cardinal Raymond Burke was out of step from the beginning of the pontificate and demoted by Francis in the fall of 2014; at the same time his position became more extreme through statements on the bishops’ synods and on Amoris Laetitia. Other prominent U.S. prelates are no longer active on the Curial stage (Cardinal William Levada retired from the Congregation of the Doctrine of the Faith in 2012; Monsignor Peter Wells, a high-ranking official at the Secretariat of State between 2009 and February 2016, was appointed nuncio in South Africa). Greg Burke, head of the Holy See Press Office, does not have the same senior advisory role that Fr. Federico Lombardi had. And while Callista Gingrich arrived in Rome in early November, it’s hard to say what kind of effectiveness she’ll have. Her role would be especially important in a moment like this, with a pope like Francis who does not have the same enthusiastic and almost providential view of the United States that his immediate predecessors had, and which they expressed often.

And Francis’s recent decision to establish a “third section” within the Secretariat of State specifically to handle matters involving the Vatican’s diplomatic personnel would seem to heighten the relational asymmetry. This is a “major reversal” of how Vatican diplomats had been treated under Pope Benedict XVI, who during his pontificate stopped receiving the nuncios in the Vatican and decided to choose for secretary of state not a diplomat, but a man personally close to him, Cardinal Tarcisio Bertone, thus creating tensions between the “theologian pope” and the circles and authoritative figures in the recent history of papal diplomacy. Francis has departed from Benedict by putting a renewed emphasis on Vatican diplomacy.

But this is also another sign of the growing gap in how the Vatican and Trump’s America look at each other, and at the world. With Francis’s efforts to revitalize the diplomatic service of the Holy See, the Vatican seems to be more interested in good relations with the U.S. than the other way around. Yet the gap between the Vatican and the U.S. seems less a function of Francis’s activity than of Trumpism. Roman Catholicism still has a vision of the world that can be articulated at the institutional and international levels through the large network of Catholic international organizations as well as the diplomatic service. But Trumpism seems to understand the world through parochially American categories and patterns. It’s hard to know now just how these shifts might impact or guide American Catholicism over the longer term.

* This passage was updated from the original post to clarify the timing of Gingrich’s receipt of the diplomatic agrément and the U.S. Senate’s approval of her appointment.