As It Was in the Beginning

In Cyprus, the laity have a vote.
By John Chryssavgis
Religion
Bishops 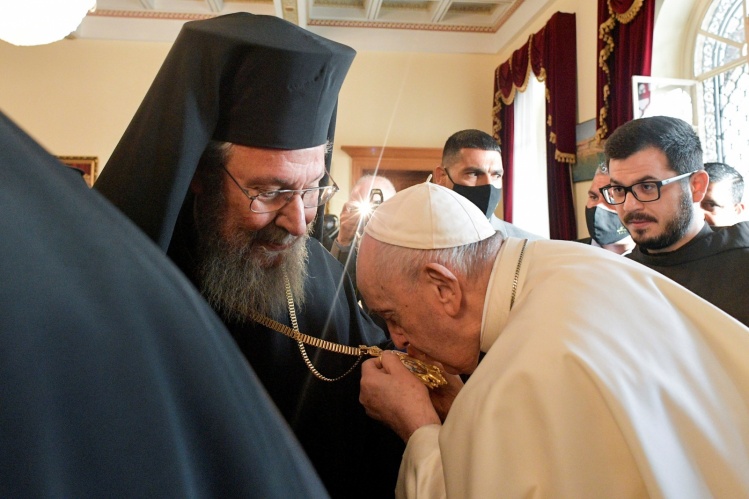 As the bishop’s role has grown in stature through the centuries, with bishops becoming the ultimate arbiter of things doctrinal and canonical, the way we elect bishops has changed and evolved. The participation of the laity in the electoral process has waned. In his late fourth-century treatise On the Priesthood, St. John Chrysostom was already lamenting how bishops were promoted:

Tell me, then, where do you think these great disturbances in the church come from? Personally, I think that they transpire from the ill-considered and random manner in which bishops are chosen. (Book III, 10)

The upcoming election of a new archbishop for the ancient Church of Cyprus is an opportunity to reflect on the role of the laity in selecting candidates for elevation or ordination in the Orthodox Church—especially (but not only) elevation to the highest level of the priesthood.

In Cyprus, metropolitans and bishops aspiring to the vacant throne of the archbishop have publicly declared their candidacy. Over the next few weeks, a course of action established by the Church’s charter will be set into motion. All resident baptized Orthodox Christians will be invited to choose from a list of candidates. The three names with the most votes will then be submitted to the Holy Synod, which will then elect its new presiding primate. The first part of this process has become a full-fledged campaign, complete with polls and plots, use of social media, and conspiracy theories about “stolen” votes and consternation about “fraudulent” elections.

The Church of Cyprus is the last of the Orthodox Churches to continue the apostolic practice of episcopal election through popular vote and synodal confirmation. The rest of the Orthodox Churches have, conveniently and complacently, switched to electing their bishops behind closed doors. These other Churches will doubtless remain silent about the election process in the Church of Cyprus, which was founded by St. Barnabas. They will no doubt say that they wish to refrain from interference in the decisions of self-governed Churches. But I wonder whether their silence actually indicates an aversion to including the “public”—that is, the laity—in what they consider their own private affairs.

The upcoming election of a new archbishop for the ancient Church of Cyprus is an opportunity to reflect on the role of the laity in selecting candidates for elevation or ordination in the Orthodox Church.
sharetweet

In debates about the involvement of the laity in synods that define Church teachings or policies on contemporary social challenges, Orthodox bishops often complain that lay involvement smacks of democracy or Protestantism. And in contemplating the possible advantages and disadvantages of engaging the masses in the election of a new archbishop, both ordained bishops and professional theologians are prone to mistrust the results.

Should it be a matter of concern that democracy is routinely depreciated by those wishing to protect the hierarchy? Should we be troubled that they tend to describe the Church as standing against the “world”? Should we be skeptical of a synod that is reflexively suspicious of society at large? “The people don’t always choose the best candidate,” I am told. But does a conclave behind closed doors always choose the best candidate? What, exactly, are we afraid of when it comes to democracy or “the world” or “the public”? And what is the point of the laity shouting “Axios!” (“Worthy!”) at the end of an ordination if they don’t know anything about their new bishop?

Instead of considering the involvement of the laity in terms of a competition for power and status, it might be helpful to think of the election process in the context of Communion. There is, after all, a sacramental, even a Eucharistic dimension to the election of an archbishop. Just as we could never conceive of the liturgy (which means “a labor of the people”) as solely clerical or exclusively priestly, so too the election of a presiding hierarch integrates the two essential components of the Church—clergy and laity—into a living organism with body and soul. There can be no Eucharistic celebration without the laity, no Church fullness without the laity, and so there should be no episcopal election without the laity.

Transparency is always a challenge in the Church. Not because bishops don’t comprehend its importance or relevance in the modern era, but precisely because they recognize its ramifications for a medieval system in the modern world. That’s why invocations of “tradition” are brought into full force against anyone who dares to question established practice, with those in authority casting indiscriminate aspersions on “liberalism,” “modernism,” and “secularism.”

Should it be a matter of concern that democracy is routinely depreciated by those wishing to protect the hierarchy?
sharetweet

What is particularly surprising to me about the process unfolding in Cyprus is how blunt the candidates have been in advertising their qualifications and platforms. This certainly seems unusual for an institution like the Church, which is normally so shielded by seclusion and secrecy. But does that make it wrong? Should it perhaps be considered a feasible model for imitation, as long as there are appropriate ground rules? Wouldn’t it be preferable to hierarchs promoting “their own” without consultation or collaboration from the rest of the church—the so-called “plenitude”?

Let me share a personal anecdote here. A while ago, a bishop called to inform me of his interest in pursuing the leadership of a vacated diocese. Despite the assurance of St. Paul, that “anyone aspiring to the office of bishop desires a noble task” (1 Timothy 1:1), I was initially scandalized that someone would so brazenly pursue an episcopal throne. Was I so naïve as to believe that the Holy Spirit alone determined such sacred decisions? In any case, why would the Holy Spirit not tolerate being embroiled in such all-too-human aspirations? Could it be that this openly ambitious man was more honest than other candidates who might feign disinterest or detachment while quietly angling for preferment?

I would argue that it might be more honest and honorable if candidates for ordination—especially in the case of bishops or metropolitans, and certainly in the case of archbishops or patriarchs—were subject to public scrutiny. Would it not be beneficial for everyone to learn where such candidates stood on fundamental issues, such as science and technology, war and peace, politics and economy? After all, if the selection process is deliberately hidden from the community, problems will most likely reveal themselves only after the fact, to the greater detriment of the Church. In any case, the ultimate decisions would still belong to the bishops, but the laity would not be systematically excluded from the process.

Perhaps the acclamation “Axios!” will again become what it once was: a stamp of popular approval rather than the cheer of passive adulation it has sadly become. I know it’s just a dream for now, but we can at least imagine. It beats waiting for incense to rise from synod meetings.

John Chryssavgis is Archdeacon of the Ecumenical Patriarchate and honorary professor of the Sydney College of Divinity. A clergyman of the Greek Orthodox Archdiocese of America, he lives in Maine.