One Oops From Armageddon 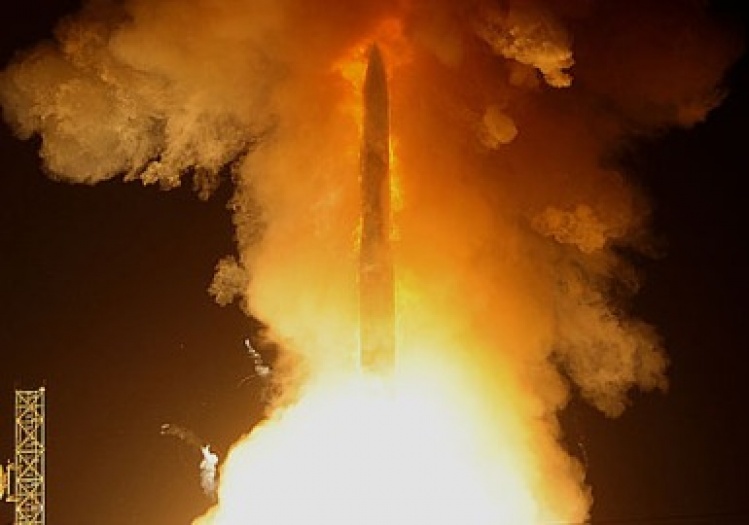 It is not as though we haven’t been warned. In April 1945—three months before their invention was tested, and before they could know if it even worked—the scientists who had built the first atomic bomb warned American policymakers that it was likely others, too, would soon make a nuclear weapon: “As a result, it is extremely probable that the future will make it possible to be constructed by smaller nations or even groups.”

It is a warning that has gone unheeded ever since. During the Cold War, the great fear was of a history-ending conflagration, a “nuclear exchange” between the United States and the Soviet Union. Since 9/11, concern has centered on the use of a nuclear weapon—or of radiological poisons—against a civilian population by a terrorist cell: the unspecified “groups” of the scientists’ jeremiad. Now, journalist Eric Schlosser has given us the raw material for a new nightmare: the likelihood of a catastrophic mishap culminating in the unintended explosion of a nuclear weapon. As a declassified Air Force history cited in Schlosser’s book observes with admirable understatement, the result would be “an accident for which a later apology might be inadequate.”

Although he is the author of two New York Times bestsellers—Fast Food Nation and Reefer Madness—Schlosser seems an unlikely authority on a topic that traditionally has been not only top secret, but the near-exclusive purview of so-called defense intellectuals, wonks who inhabit the Pentagon and the nation’s military-funded think tanks. Nonetheless, Command and Control is a brilliant book, and the author’s emperor-without-clothes approach is precisely the right one to demystify a subject whose importance seems inversely proportional to the public’s understanding of it.

While the book breezes along in journalistic, even novelistic style, it is not a comfortable read, for Schlosser’s focus is on those occasions—uncomfortably many, it turns out—where there have been significant slip-ups in the oversight of the nation’s nuclear arsenal. One such near-catastrophe occurred on January 23, 1961, when a B-52 bomber crashed near Faro, North Carolina. In the course of the plane’s death spiral, two Mark 39 hydrogen bombs, each having the explosive equivalent of 4 million tons of TNT, were ejected from the aircraft. One of the bombs penetrated more than seventy feet into dense mud. The other floated gently to earth and was found hanging by its parachute from a tree. Every safety mechanism that had been built into that bomb to prevent an accidental detonation had failed, except one: a simple low-voltage switch of the sort that one could buy in a hardware store for less than a dollar.

The author describes a multitude of similar close calls involving nuclear weapons. But the centerpiece of the book is the Damascus accident, which occurred in a missile field outside Damascus, Arkansas, on September 18, 1980, when a careless technician servicing a Titan-II intercontinental ballistic missile dropped a nine-pound socket wrench. The tool penetrated the missile’s thin skin, causing highly volatile fuel to leak into the surrounding concrete silo. Atop the Titan was a nine-megaton thermonuclear warhead.

Schlosser skillfully builds suspense by alternating a blow-by-blow, almost minute-by-minute account of efforts to avert the impending disaster with chapters that recount the long history of efforts aimed at avoiding nuclear accidents like the one at Damascus. Both are stories of remarkable individual heroism and jaw-dropping bureaucratic ineptitude. Among the heroes of Schlosser’s tale are not only the Air Force enlisted men and local first responders, but engineers like Bob Peurifoy, an employee of Sandia Laboratory—one of the nation’s three nuclear-weapons labs—who has repeatedly put his career at risk fighting complacency and his colleagues’ false confidence in order to ensure the safe design of America’s nuclear weapons.

As Schlosser points out, the essential challenge that Peurifoy and other weaponeers face is the “always/never” dilemma—the bombs must always go off when they are supposed to, but never detonate as the result of an accident. In early 2008, this conundrum was succinctly summed up by General Kevin Clinton, then head of the U.S. Strategic Command, when he admitted that STRATCOM’s mission was one “where we as human beings are challenged to be perfect. We are not perfect.”

CLINTON’S FRANK IF disturbing admission comes not in Schlosser’s Command and Control, but in Thermonuclear Monarchy by Elaine Scarry, the Cabot Professor of Aesthetics and the General Theory of Value at Harvard University. In contrast to Schlosser’s journalistic take on recent nuclear history, Scarry’s critique of the existential dilemma created by nuclear weapons is that of an ethicist, legal scholar, and philosopher. The two books could not be more different in tone and approach. Going beyond Garry Wills’s Bomb Power: The Modern Presidency and the National Security State, Scarry argues that the concentration of power which the decision to use nuclear weapons has vested in the Executive Branch is fundamentally antidemocratic. Not only is it at odds with the social contract the government makes with the electorate; it is also a direct violation of the Constitution, which requires congressional authorization for a declaration of war and, according to Scarry’s reading of the Second Amendment, gives to the country’s entire adult population responsibility for the use of the nation’s “arms”—including nuclear arms. Particularly egregious, in the author’s view, is the “first-use” doctrine in American defense planning—the declared right to initiate the use of nuclear weapons in a conflict, which every president since Truman has maintained. (In 2010, President Barack Obama announced that the United States would not be first to use nuclear weapons against a non-nuclear state, if that state was in compliance with the Nuclear Non-Proliferation Treaty.)

Scarry’s use of academic jargon occasionally creates some tough sledding for the reader. One example: “Finally, the mistaken sense that constitutionally designated acts of verbal performance can be shifted among branches is perhaps heightened by the belief that such shifts are reciprocal.” And a familiarity with philosophical treatises is certainly helpful—the author cites Plato, Locke, Kant, Hobbes, and Leibniz, among others, in arguing that nuclear weapons are immoral and should be abolished.

In the end, Scarry’s legal, ethical, and philosophical case against the bomb seems more principled than practical: “Nuclear weapons cannot be reconciled with governance,” she writes at the start of one chapter. After 538 pages, the author’s call to action—to rid the world of these potentially world-destroying weapons—comes in the book’s final two sentences: “We should use whatever tool can best accomplish the dismantling. If there is a better tool, please tell us what it is, and help us to see how to use it.”

Ironically, if there is a glimmer of hope for the future at the end of these two very different books, it lies in the actions of individuals, imperfect humans like those who rushed to the chaotic scene at Damascus, and who work still to ensure that such accidents don’t happen again.

Gregg Herken is an emeritus professor of American history at the University of California, and author of Brotherhood of the Bomb: The Tangled Lives and Loyalties of Robert Oppenheimer, Ernest Lawrence, and Edward Teller. His next book, The Georgetown Set: The Friends and Rivals Who Waged—and Won—the Cold War, will be published by Knopf this fall.