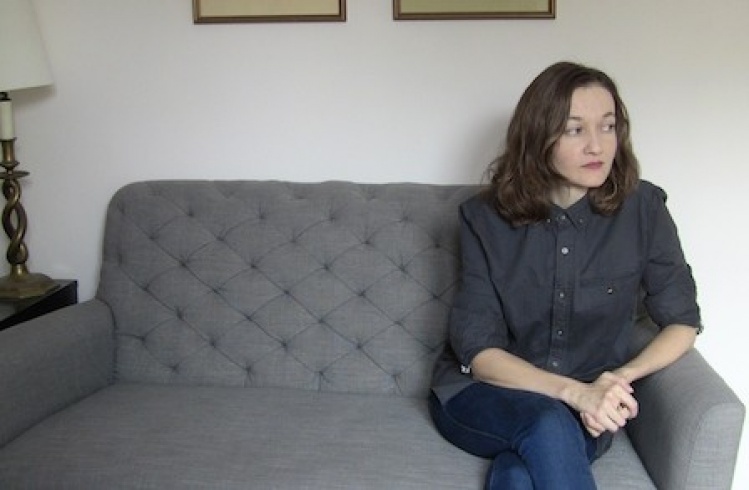 What is the poet’s thumbprint—the thing by which we can say, “There goes Dickinson, or Bishop, or Eliot, and nobody else”? It varies by the poet, to be sure. For Dickinson, it’s the dash, that bold mark of hesitancy that breaks and remakes the line: “Worlds scoop their Arcs - / and Firmaments - row - / Diadems - drop - / And Doges surrender -.” For Bishop, it’s the moment of self-correction, when the poet writes the revisionary process into the poem itself: “from his lower lip / —if you could call it a lip— / grim, wet, and weaponlike, / hung five old pieces of fish-line, / or four and a wire leader / with the swivel still attached.” For Eliot, it’s the channeling of other voices into his own, from The Waste Land (“Why then Ile fit you. Hieronymo’s mad againe”) to Four Quartets (“Sin is Behovely, but / All shall be well, and / All manner of thing shall be well”).

For Jana Prikryl, who has just published her third collection of poems, the identifying marker is syntax. The critic Elizabeth Sewell once described grammar as “a choreography of language and mind.” Prikryl’s sentences are distinctly and idiosyncratically shaped—chopped apart and then spliced back together. They start in one direction and seem to lose their way only to find it again. Somehow, they’re both urgent and dilatory, getting where they’re going with great speed even while they take many side roads to get there. Take “First Voice,” the short opening poem from Prikryl’s new collection, Midwood (W. W. Norton & Company, 128 pp., $26.95):

Went fetal as an ear on the bed and tried to feel
the dusty blue rhomboid of window being
in the vanguard of twilight every second,
hurtling, the word impressing itself
as no hurtling would on my mind
through space on the back of this
whale turning, turning, punctual
the other cheek to that star

This serves as an excellent introduction to the distinctive rhythm, the distinctive hurtling, of Prikryl’s voice. The poem begins at a gallop (no time to be wasted on “I” before “went”) and it only gains speed as it rolls downhill. Every line but the third ends without punctuation; monosyllables—ear, bed, space, whale, cheek, star—drive things forward; the few commas just serve to emphasize words of action: “hurtling” and “turning.” At the poem’s beginning, the speaker, in the fetal position, is still. But her language and her mind move fast.

In Prikryl’s poetry, sense, dependent upon syntax, is always on the verge of breaking down. The words are often plain but their organization is oblique, off-kilter. The fourth line in “First Voice” opens dramatically, with an active verb and an initial stress, “hurtling.” Who is hurtling here? The speaker? The blue of the window? Language itself? All of them, it seems, and the world, too. Hurtling towards what, though? We have to wait another eleven words before we get an answer: hurtling “through space.” Through, not toward: prepositions matter, and Prikryl’s choice tells us nothing about directionality, at least not yet. We learn the medium, not the end. The penultimate line complicates things further, indicating that the speaker—or language, or the world—is hurtling but also turning. (In “turning, turning,” I hear the Eliot of both “Ash-Wednesday,” a poem of repeated turning/converting, and of The Waste Land, with its Augustinian repetitions: “To Carthage then I came // Burning burning burning burning”). Again, prepositions matter: turning of what and to what? We have a slight, puzzling pause at the word “punctual”—who is punctual? to what appointment or task?—before we get to the poem’s last line. Finally, things lock into some kind of place: the turning of the other cheek allows for a turning to that star, “the vanguard of twilight” that appears through the window. Now we can piece it all together: assuming passivity in the bedroom has enabled, it seems, an active attunement to the world beyond the bedroom.

Midwood is the result of a discipline imposed by, or embraced through, confinement. During the spring of 2020, when the world first shut down, Prikryl, who is an editor at the New York Review of Books, decided to begin a new poem every morning in the short time before her son woke up. In the afternoon, she wrote more and revised while sitting on her fire escape, looking at the trees of the Brooklyn neighborhood called Midwood. The 113 resulting poems—all under a page, all odd and spiky and moving in several senses of the word—comprise her new collection. Midwood refers to a geographical place in Brooklyn, but it also refers to a time of life (Prikryl is forty-seven) and the existential feeling of in-betweenness that most of us, maybe all of us, feel. Think of Dante’s Inferno: “Midway in our life’s journey, I went astray / from the straight road and woke to find myself / alone in a dark wood.” Things don’t seem all in the past, but they don’t seem all in the future, either. It’s a perplexing place to be. As one poem asks, “what if what is emerging is what’s here”?

Prikryl captures pandemic experience perfectly, when nothing and everything seemed to be happening at the same time; when we held it together, but barely; when our bodies were largely stationary and our minds roamed. Prikryl ends the second line of “First Voice” with the phrase “window being.” The phrase is completed in the next enjambed line—“window being / in the vanguard of twilight”—suggesting that being is used as a verb. But the line break allows you to imagine, if only for a moment, that it’s a noun, that it’s describing a “window being.” And isn’t that what many of us were for a long stretch of 2020 and beyond—window beings, looking out at the world but not quite in it?

During this stretch, time blurred and bled, life lived largely in memory: “It started another time in me,” as one of Prikryl’s poems puts it. Think of all of those exes getting back in touch, those long-lost friends “just reaching out.” Midwood is filled with recollections: of a failed pregnancy (“the heartbeat’s gone,” a doctor tells the poem’s speaker, “it’s very common”) and of failed romances (“if I remember correctly I could find no / argument against your seriousness, it matched / my distance from you too exactly”); of sledding with “the sky full of unexpected stars” and of feeling jet lagged in Rome; of giving an aspiring poet advice (“each line has been an accident,” the speaker says) and of watching a soccer game and whispering to someone nearby, “do you think parity with such splendor / is possible in the other arts.” (The coach, apparently not a poet, overhears “and advised me to keep my distance / from comparison.” Prikryl can be quite funny.) It’s also filled with stunning passages of description—stunning not because of their lavish language but because of their stringent acuity, the odd and surprising angles they take on things. (“Surprise was my own possession,” the speaker says at one point.) Maple trees display “male-pattern baldness” and sparrows are “the toy ambassadors of nature”; the speaker’s childhood was “planted with dull unmythical / grass.” (Prikryl was born in what is now the Czech Republic and moved to Canada when she was six.) Midwood is simultaneously intimate and distanced. It offers us access to dreams and erotic experience; it keeps us at a remove through irony and syntactical oddity. “Out in the open trees behave differently,” Prikryl writes. “They stand differently, their posture is different.” Prikryl’s poems stand differently, too, their posture difficult and delightful.

The centerpiece of the collection is a twenty-four-part poem titled “Midwood 1,” “Midwood 2,” and so on. The first of these poems begins, “Out of the garment of the land / out of the / of.” The lines are winnowed down, from eight syllables to three to one, from seven words to four to one, until “of” stands alone, the end of the stanza. We’re left with a preposition: a word that governs relations, that takes a given thing—a noun or pronoun—and places it, positions it. When you can’t or shouldn’t leave the house, when you see the same couch and the same coffee mug and the same computer screen day after day, what you’re left with is positioning. Maybe you move the fan from here and to there; maybe you put the book on the nightstand rather than beside it. Another poem in Midwood, “First Aubade,” opens, “Morning a telescope / have you ever had so much time / geographic folds / upon and upon and upon.” Three upons, all in a row. A writer’s prepositions, more than their nouns or verbs, tell us the kinds of sentences they write. Jana Prikryl’s syntax, which keeps it together by the skin of its teeth, is unlike anyone else’s.