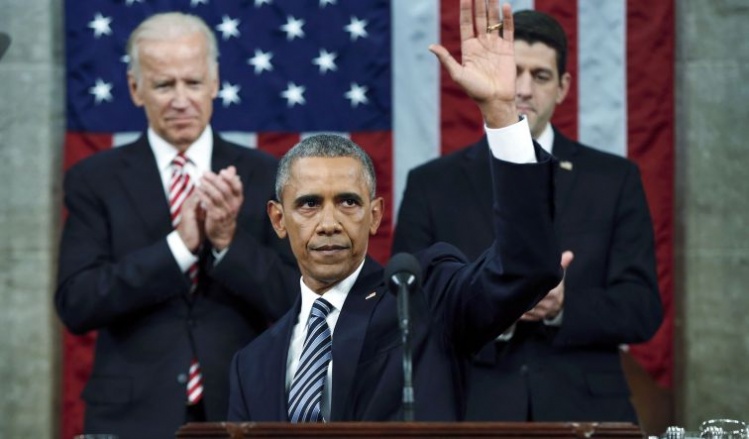 The most venomous part of the Republican Party has seized control of the national dialogue. This forced President Obama to use his final State of the Union message on Tuesday to battle against intolerance, anger, pessimism, and despair.

Even more tellingly, the Republican designated to reply to him, South Carolina Gov. Nikki Haley, effectively joined hands with a man she otherwise criticized. She implored her party to reject “the siren call of the angriest voices.” For one moment, at least, Obama had realized his dream: A part of red America came together with his blue America to share responsibility for the nation’s frustrations.

Yet the limits of this cease-fire were brought home with a speed facilitated by the technology of instant communication: Haley had barely issued her plea against rage when Twitter was engulfed by it—directed her way by voices at the right end of her party, particularly from enthusiasts for Donald Trump. The siren call struck back.

There were paradoxes and ironies galore in the president’s address. A dispassionate perspective might acknowledge the successes of a president who took over when the nation’s economy was in free fall and a new global Great Depression was a genuine possibility.

Obama was not wrong to assert that unemployment has been cut in half on his watch, that the United States “has the strongest, most durable economy in the world,” and that “anyone claiming that America’s economy is in decline is peddling fiction.”

But Obama, like all Democrats, is caught up in a dilemma. It involves problems that he and his party know they have an obligation to solve. As the president himself said, globalization and technological change mean that “workers have less leverage for a raise. Companies have less loyalty to their communities. And more and more wealth and income is concentrated at the very top.”

The very ire that Obama and Haley want to contain is thus being fed by economic forces that progressives and social democrats around the world are having great difficulty taming or redirecting.

This frustration is aggravated by fear of terrorism, global disorder, and the mass movement of people across national boundaries. Obama did a far better job Tuesday than he has in recent months in defining and defending his approach to foreign policy. His driving question: “How do we keep America safe and lead the world without becoming its policeman?”

And after citing Pope Francis’s injunction against imitating “the hatred and violence of tyrants and murderers,” the president warned that the nation is only weakened and its safety compromised “when politicians insult Muslims, when a mosque is vandalized, or a kid [is] bullied.”

Obama expressed regret that “the rancor and suspicion between the parties has gotten worse instead of better” during his presidency. It was useful for him to support a variety of reforms in how campaigns are financed and legislative districts are drawn. In light of attacks on voting rights by the Supreme Court and in some Republican-held states, it was especially important that he stressed the need to make voting easier rather than harder.

But his diplomacy and self-criticism understated the deep costs of the obstruction directed his way by partisan opponents throughout his presidency. If you wonder why Americans are so dispirited, consider a Pew survey finding that on the political “issues that matter” to them, 79 percent of Republicans and those who leaned that way thought they were “losing,” but so did 52 percent of Democrats and Democratic leaners. Overall, those who saw themselves on the losing end outnumbered winners, 64 percent to 25 percent. When nearly two-thirds of us feel like losers, it should be no surprise that the current rage is rage.

Haley’s comments and the reaction they drew from the GOP’s rejectionist caucus suggest that leaders of the Republican Party may realize they miscalculated in spending years stoking indignation among the faithful. Who, really, can blame rank-and-file Republicans for taking their alienation seriously and turning to Trump and Sen. Ted Cruz as the most forceful expressions of it?

The media and the Democrats also bear responsibility. The networks see Trumpian wrath as a ratings magnet and act accordingly. Democrats have stashed their debates in the far corners of the television schedule and have not found a way to balance touting their achievements with answering legitimate discontent. The president took a stab at this on Tuesday. It was a decent effort. It will take a lot more to subdue the furies.