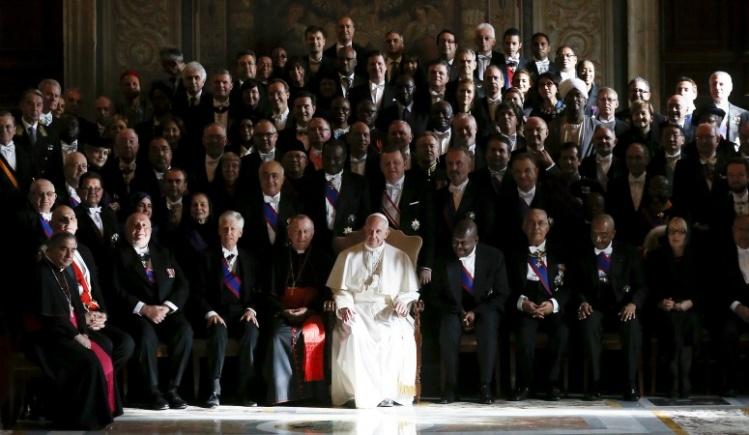 It’s hard to believe that Ash Wednesday and the beginning of Lent is only one month away. And for only the second time since 1962, when John XXIII revived the sixth-century tradition of Rome’s Lenten Stations, a pope will not open the penitential season with Mass at the Basilica of Santa Sabina on the Aventine Hill.

Benedict XVI was the first to interrupt this restored custom in 2013 when he changed the venue to St. Peter’s Basilica. That’s because the start of Lent that year came just two days after he announced his resignation as Bishop of Rome.

The Vatican quietly gave notice this week that Pope Francis will also celebrate this year’s Ash Wednesday Mass at St. Peter’s. Evidently, this time the reason for the change is that the pope will be commissioning the so-called Missionaries of Mercy for the current Holy Year.

According to the papal bull for the Jubilee of Mercy, Misericordiae Vultus, these specially selected priests are meant to be “a sign of the Church’s maternal solicitude for the People of God” and “of the Father’s readiness to welcome those in search of his pardon.”

Francis will grant them special “authority to pardon even those sins reserved to the Holy See,” and he expects them to give “particular attention” to celebrating the Sacrament of Reconciliation—that is, hearing confessions. He also wants them to be “persuasive preachers of mercy.”

It’s too bad that organizers of the Jubilee (or was it Pope Francis himself?) thought it would be more fitting to celebrate this commissioning ceremony and, more importantly, Ash Wednesday at St. Peter’s rather than at Santa Sabina. The latter dates back to the mid fifth century and played a key role in the early Church of Rome’s penitential practice for gradually and fully reconciling public sinners back into the Christian community.

The Dominicans have been ministering at Santa Sabina since the early 1200s and, in fact, it is now the international headquarters of the Order of Preachers, as the Dominicans are formally called.

Their presence makes the basilica an even more eloquent sign of God’s forgiveness. Not only is the order’s special patroness and protector Mary Magdalene, but when new members make their initial vows as Dominicans they are asked, “What do you seek?” They respond, “God’s mercy and yours.”

That is exactly what the Jubilee is all about.

If it looks like a duck, swims like a duck, and quacks like a duck, then it probably is a duck. Apply the so-called “duck test” to the papacy and the antiquated protocol that regulates a pope’s life and actions and you are left with no choice but to conclude that the Bishop of Rome is still a monarch surrounded by a quasi-royal court.

Despite Pope Francis’s best efforts to live as much as possible like a bishop in any other diocese, he has not yet been able to dismantle the imperial trappings and cosmetics of the papacy. Alas, all that is still very much intact.

The pope’s annual gathering with the ambassadors accredited to the Holy See, which took place this week, was yet another reminder of that. As always, the envoys were seated in rows along the sumptuously frescoed walls of the Sala Regia, an imposing, marble-floored chamber with illustrations of the papacy’s temporal and religious “victories” down the ages. This royal ballroom was designed to impress and intimidate foreign rulers, allies, and foes.

The ambassadors, representing some 180 countries and international governments, came dressed in their formal diplomatic attire. For some that meant wearing uniforms dating from centuries long ago, complete with outlandish hats and accessories like swords. The “papal gentlemen,” Catholic laymen from Rome’s most important and influential families, were dressed in morning coats, their everyday palace attire.

And what would this court be without the palace guards, otherwise know as the Swiss Guards? They were there in their inimitable renaissance costumes, which were supposedly designed by (a no doubt mischievous) Michelangelo.

Of course, the men in the pope’s entourage were buttoned up (as always) in dresses and hats just as eccentric. Cardinals and bishops in custom-tailored cassocks with watered silk sashes, dutifully following behind the pope. Ah, Poor Francis. No doubt he’d prefer nothing more than to dress in a simple clerical suit, but he plays by the house rules and dons the white soutane.

He does what he can to simplify things by refusing to wear French cuffs and have his coat of arms emblazoned on his sash. He’s also ditched the gilded throne. And you won’t see him wearing any funny shoulder capes lined with weasel fur. Not for this hombre de Dios!

One might argue that the formal pomp is Vatican tradition or, at the very least, harmless window-dressing that has nothing to do with the essentials. But then one must consider that this same corps of foreign ambassadors is expected to fill the front row seats in St. Peter’s Basilica that are specially reserved for them at every major papal liturgy.

It does not matter if they are Catholic or not. They are requested to be there in their institutional finery. They are in attendance, as it were, with the rest of the clerical court. And their “participation” is centered on the papacy, not on the liturgy.

Pope Francis ended the Christmas season last Sunday by celebrating Mass in the Sistine Chapel for the Feast of the Lord’s Baptism. And he continued the custom started many years ago by John Paul II of baptizing a number of infants, most of them children of Vatican employees.

The Argentine pope spoke briefly and without notes after the proclamation of the Gospel. In his “homilette” he told the parents and godparents of the newly baptized that faith was the greatest gift they could give their kids.

He has always insisted, rightly, that this faith is rooted in the community of the church. And while people may differ in how frequently they formally participate in the public rituals and ceremonies, it’s important that they still feel themselves as part of the Christian faithful.

However, the pope is probably also as aware as anyone that a lot of people these days are throwing in the towel (or their baptism garment) and giving up on the church altogether. A recent report suggests that the number of Italians who have formally broken ties with the Catholic Church is at its highest level in fifteen years (that is, since such a survey was first conducted).

An atheist group in the country said nearly 48,000 Italians last year downloaded a form from its website with which they can formally request church officials to remove them from the baptism rolls. In other words, they obtained the document seeking a sort of “annulment” of their baptism.

The group, the Union of Rationalist Atheists and Agnostics (UAAR), says some 338,429 people have downloaded the form over the past decade and a half. However, a word of caution: it is not clear how many of those downloaded forms were actually filled out and submitted to church officials.

Pope Francis’s popularity, it seems, is not enough to keep all Catholics in the fold.