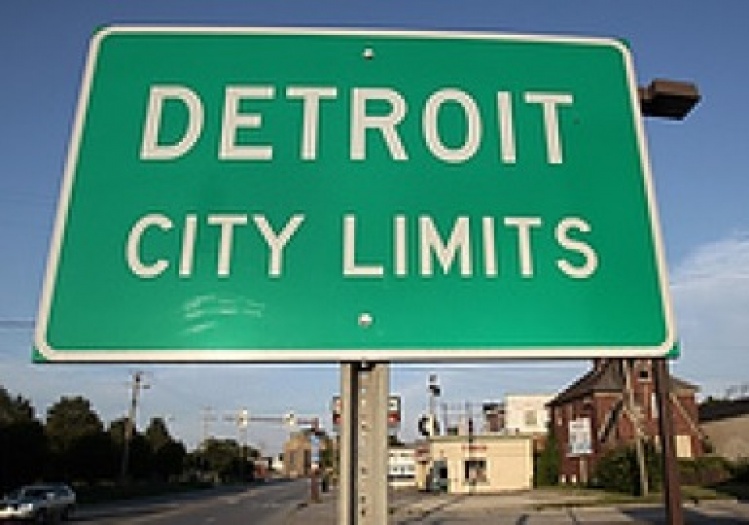 Detroit has been dying for a long time. When my parents returned to the city in 1955—my mother was born there in 1917, while my father arrived as an immigrant in the mid-1920s—they reluctantly chose to live in a suburb. In retrospect their decision seems foreordained. Detroit began losing white population in the later 1940s, although its population peak of just under 2 million was recorded in the census of 1950. Population loss alone, troubling though it was, did not mark Detroit as unusual. Eight of the nation’s ten largest cities lost population, nearly all of it white, over the course of the 1950s. None of these cities, however, was as dependent on a single industry for its survival as Detroit. None was so disproportionately blue-collar in its population. And none had its fortunes directed to the same extent by an economic elite that did not live locally. (Henry Ford, who was certainly a local, never built a plant within the Detroit city limits and held aloof from local efforts at civic improvement.) If my parents intuited an uncertain future for a city they loved, they had good reason to do so.

Detroit in the late nineteenth century possessed a diversified industrial base. The city produced rail cars, carriages, bicycles, pharmaceuticals, garden seeds, shoes, and a great deal more. By the 1920s, after a decade in which the city’s population doubled, auto manufacturing dominated. Prior to the 1950s, excessive dependence on an industry notoriously sensitive to economic fluctuations meant simply that hard times were harder in Detroit. In the depths of the Great Depression, Detroit’s unemployment rate was the highest of the nation’s major cities. With the decentralization of auto production after World War II, the city’s dependence on a single industry had new and even graver consequences. Manufacturing jobs in the city were disappearing by the 1950s, while regional auto employment was entering a longer, slower decline. Postwar prosperity helped many white working-class families cope by enabling their sons and daughters to get an extended education. With a man’s seniority rights protected by his union contract—transfer rights to distant plants would eventually be part of the contract too—he could reasonably hope to work long enough to collect a pension. By that time, if life went according to plan, the kids would be safe in white-collar jobs.

Things worked differently for blacks, whose employment in the local auto industry dates for all practical purposes only to World War II. Those who entered the industry early accrued seniority rights and typically pursued the same family strategy as their white working-class counterparts. Detroit’s substantial black middle class—average income among Detroit’s African Americans in the 1960s was the highest in the nation—had its taproot in auto employment. But for the legions of black peasant migrants from the deep South who arrived in the 1950s and ’60s, shrinking employment prospects locally led all too frequently to multiple generations in poverty. Growing pockets of the city were characterized by crime, drugs, and hopelessness, which gave the city as a whole an aura of danger, at least for many whites. Resistance to open housing, a potent force in city politics even in the 1950s, was one discouraging result. So was accelerating white flight. When the city’s black neighborhoods exploded in July 1967, leaving forty-three dead and thousands of torched homes and businesses, an already substantial white outflow turned overnight into a tsunami. Detroit had a black majority by the early 1970s.

With its economic base substantially eroded, the city inherited by its first black mayor—Coleman Young was elected in 1973 and served for twenty years—came with a built-in deficit. The relatively low educational level of its population discouraged investors who might generate alternative sources of employment. Its high rate of violent crime pushed growing numbers of the remaining middle class, black as well as white, into the suburbs. (The closure of numerous parochial schools in the 1970s and after was a factor too.) And while the local auto elite were generous with their charitable dollars, they did not—indeed, given the logic of the industry, probably could not—save their headquarters city by providing jobs. “There’s nothing wrong with Detroit that a few auto plants can’t cure,” Coleman Young liked to say, which was true in the abstract but reflected the kind of delusional thinking that has long characterized the city’s politics. Coupled with a racial politics that sometimes bordered on paranoia, this willful refusal to see present realities meant that local government often seemed dysfunctional, though it was in reality not notably more corrupt or inefficient than the governments of other large cities. With the conspicuous exception of Kwame Kilpatrick, currently a guest of the federal penal system, Detroit’s mayors have been reasonably competent. Their failures rest squarely on the size of the problems they faced—problems that won’t be solved without state and probably federal assistance.

Those of us who have watched Detroit’s long dying tend to think in terms of the physical city—the abandonment of buildings, their subsequent decay and finally, if the city does its job of demolition, the rubble-strewn lot. For a very long time, I found love in the ruins (to borrow from Walker Percy). Life has hung on stubbornly in Detroit, in such unexpected forms as the flourishing Hungarian bakery, now gone, that I stumbled upon in a decaying working-class enclave close to the city’s western border. (The proprietor had provided each of the often-married Gabor sisters with wedding cakes, which presumably helped his bottom line.) St. Cecilia’s Church, with its apse mural of a black Christ, provided refuge to the Tentler family when it seemed that nearly every Catholic in our nominal home parish worshipped at the shrine of Ronald Reagan. Those memorable Cecilia’s Sundays, suffused with incense and gospel music, probably kept my children in the fold. The Detroit Institute of Arts, a refuge of another sort since my adolescence, still delights with its dazzling collection and especially its famed Rivera murals, paid for with a second generation of Ford money. Flower Day at the city’s sprawling Eastern Market, a plant-buying orgy for gardeners throughout the region, provided—and indeed continues to provide—a pageant of interracial good fellowship.

One can still find love in the ruins of Detroit, but it’s harder now. So much of the city has disappeared that recent visits have left me disoriented. (I tend to navigate by landmarks, an astonishing number of which are gone.) A new generation of urban pioneers now hoists the banner of optimism—“say nice things about Detroit!”—while I alternate between rage and despair. Yes, there are signs of life there, some of them new, like the city’s flourishing arts scene. But the decay is so vast and the human suffering so appalling that optimism seems not just delusional—an old Detroit problem—but almost obscene. Still, the city would be even poorer without it. Cheers, then, for the probably deluded optimists who say nice things about the imploding city they now call home. Given Detroit’s status as the nation’s busiest border crossing with Canada and its access to the world’s largest source of fresh water, even I would admit that it likely has a long-term future in an increasingly globalized and water-starved world. Still, I worry in the shorter term about those many Detroiters who have been cast off as so much detritus in globalization’s wake.

That human wastage brings us to the real significance of Detroit’s collapse. The Detroit of my childhood, though in the first stages of decline, was still a place where working-class people could live in comfort and security. The blue-collar city of my youth boasted the nation’s highest rate of homeownership. Working people paid dearly for their relative affluence: even unionized plants were dirty and noisy, most jobs were mind-numbingly repetitious, and overtime pay can’t compensate for the toll exacted by excessively long hours. But that affluence was still a notable achievement, the result of strong unions locally and—honesty compels—relatively weak competition from overseas manufacturers. It made upward mobility possible for the next generation and fostered a strong communal ethos, albeit one that was ultimately undermined by race-based fears and resentments. We do well to remember, however, that a good many African Americans benefitted from the era of working-class affluence. The tragedy is that it ended before they were able as a group to enjoy the same shot at upward mobility as their immigrant predecessors.

Detroit’s collapse is thus about more than race, however conspicuous the racial factor may be. It has everything to do with the recent history of the nation’s working class, devastated by the implosion of manufacturing and the concomitant erosion of wages, union protections, and chances at upward mobility. We delude ourselves if we imagine that the fate of the nation’s workers does not affect us all. In that sense, we are all Detroiters.