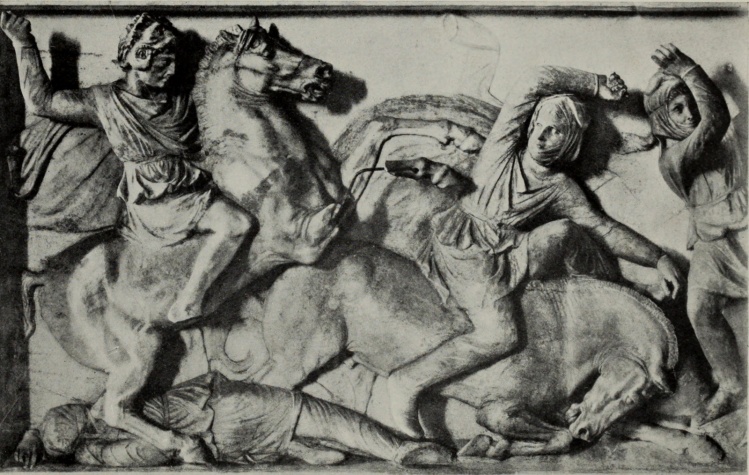 At its etymological root, tragedy has something to do with goats (tragos “goat” + ōidē “song”), but the Western understanding of the genre has largely left these capric origins behind. Whether we like it or not, our notion of tragic drama is grounded in the thinking of Aristotle, specifically in the literary criticism of his Poetics. Although it was written well after the first examples of Greek tragedy, Aristotle’s dominating analysis has made it practically impossible to sit through Oedipus Rex or Othello or even Mahler’s “Tragic” Sixth Symphony without thinking of the peripeteia (“reversal of circumstances”) at the heart of his model of tragic plots.

Despite Aristotle’s profound influence on our idea of the “tragic,” no literary term has been so misunderstood and misapplied (with the possible exception of “ironic”). It is often erroneously taken as a synonym for “calamitous” or even simply “sad.” But the notion of the tragic—at least as Aristotle sees it—is something more complicated. He famously defines the genre as the “mimesis of an action that is serious, complete, and grand,” one which uses its principal tools of “fear and pity” in order to effect a kind of “catharsis” in viewers. A cursory search of recent academic publications in classics shows that we’re still sparring about what catharsis really means and still confused about why a drama that terrorizes through fear nevertheless produces pleasure.

With his new book, the Greek-military historian Victor Davis Hanson amplifies our misunderstanding of tragedy by shoehorning the current occupant of the White House into the tradition of Sophoclean protagonists, positioning Trump as a so-called “tragic hero.” In The Case for Trump—whose occasional trafficking in Uranium One conspiracy theories and sophomoric Homeric epithets like “polished teleprompter reader Barack Obama” I shall graciously pass over—Hanson asks us to see in Trump a modern Ajax or Antigone, or even a “tribal” “outlier” like Achilles whose “service is never rewarded commensurately by the Greeks’ deep-state leaders.” The problem, of course, is that being a tribal, “unstable loner” has nothing to do with the tragic genre, properly understood. Donald J. Trump may be many things, but a tragic hero he is not.

Setting aside the president’s stated desire to date his own daughter, we might find it strange that a Trump supporter like Hanson would want to install him in a tradition of child-devouring, mother-marrying predecessors.
sharetweet

Before turning to our commander-in-chief, it’s helpful to return to Aristotle, on whom Hanson explicitly relies for his understanding of tragedy. In his Poetics, Aristotle repeatedly underscores the central importance of “fear” and “pity,” and he emphasizes that tragedy should not “show the very wicked person falling from good fortune into bad…for it will not arouse pity or fear.” Pity, Aristotle continues, “concerns the undeserving victim of adversity, and fear concerns the person who is similar to ourselves,” one whose life we can imagine inhabiting.

A scientist at heart, Aristotle collects tragic specimens in the Poetics, clarifying through examples how this pitiable undoing emerges in various plots. He points to figures like Thyestes, who unwittingly devours his sons at the hands of his diabolical brother Atreus. But in Aristotle’s eyes, no tragic figure exemplifies the genre as well as Oedipus. We pity Oedipus for his mistaken participation in his own destruction, and strange as it may sound, we fear finding ourselves in his place—not so much that we might end up in bed with a parent, but, as E. R. Dodds puts it in his landmark article “On Misunderstanding the Oedipus Rex,” that we similarly suffer from the “blindness of man and the desperate insecurity of the human condition.” We, too, “grope in the dark as Oedipus gropes, not knowing who he is or what he has to suffer.” Despite the unimaginable content of his transgressions, we must ultimately recognize that “Oedipus is every man and every man is potentially Oedipus.”

Setting aside the president’s stated desire to date his own daughter, we might find it strange that a Trump supporter like Hanson would want to install him in a tradition of child-devouring, mother-marrying predecessors. Categorizing Trump as a tragic protagonist is all the more perplexing because Hanson doesn’t see in this presidency an Aristotelian fall “from good fortune into bad.” His Trumpist panegyric instead intends to document triumphantly “why he ran for president, why he surprised his critics in winning…and why...Trump’s appointments and his record of governance have improved the economy” and otherwise resuscitated American greatness. The ever-rising dramatic action of The Case for Trump is designed to inspire awe and admiration, not fear and pity.

The absurdity of viewing a victorious Trump as a Sophoclean tragic hero stems from Hanson’s fundamental misconstruing of core terminology in Aristotle’s text. In Hanson’s model, a “tragic hero’s change of fortune—as Aristotle reminds us, always from good to bad—is due to an innate flaw (hamartia). Nonetheless, at least in some cases, this intrinsic and usually uncivilized trait can be of service to the community, albeit usually expressed fully only at the expense of the hero’s own fortune.” This picture of the “uncivilized” but ultimately useful tragic figure appears elsewhere in Hanson’s text. He asserts that such characters know that “the natural expression of their personas can lead only to their own destruction or ostracism from an advancing civilization that they seek to protect.” On another page, he writes that “tragic heroes cannot fit in with their times, even at the acme of their success, because they are pre-civilizational.”

It is true that Aristotle positions hamartia as one of the central elements of tragic plots, but it’s not accurate to describe it as an “innate flaw.” As Dodds writes in the aforementioned article, “The theory that the tragic hero must have a grave moral flaw, and its mistaken ascription to Aristotle, has had a long and disastrous history.” Not some “anti-civilizational” defect of character, a hamartia is an error, a mistake, or perhaps a miscalculation. The closely related verb hamartein means “to miss the mark”—but not exactly in the sense of aiming for the bull’s-eye and clumsily landing a dart in a friend’s beer. In the more elevated domains of tragedy and ethics, the concept of “missing the mark” might be understood best as a kind of law of unintended consequences. In his own rendering of hamartia, Dodds explains that this “error” is “an offense committed in ignorance of some material fact and therefore free from πονηρία [wickedness] or κακία [evil].” Following the Poetics’s citation of Oedipus and Thyestes, Dodds finds that both men “violated the most sacred of Nature’s laws and thus incurred the most horrible of all pollutions; but they both did so without πονηρία, for they knew not what they did.” Aristotle’s tragic heroes lack knowledge, not morality.

By portraying hamartia as some kind of practically expedient lack of integrity, moreover, Hanson presents his own master class in Trumpist paradiastolē, a “redescription” of vices as virtues and a rhetorical distillation of our “post-truth” era of neck-snapping political spin. Through this tactic—one that deeply troubled early modern thinkers like Francis Bacon and Thomas Hobbes—playboy notoriety can be recast as renown, crass incivility as forthrightness, felony tax fraud as financial savvy. This repackaging of Trump’s moral failings as his most laudable qualities permeates The Case for Trump. Through Hanson’s redescription, Trump’s “anti-civilizational” hamartia is rendered as romanticized gunslinger vigilantism. At another point, Hanson says Trump might “be compared by his enemies to the thuggish Roman populist Catiline,” but without even denying the charge he immediately reframes this proto-Trump epitome of sedition as an exemplar of “rhetorical power and directness.” More broadly, Hanson explains the “chaos” of White House staff turnover as a matter of finding “personalities [who] jibed with Trump’s own mercurial moods.” For Hanson, Trump’s dishonest, foul-mouthed Mammonism is a heroic feature, not a bug.

Even if we can’t find genuinely Oedipal, I-didn’t-mean-it hamartia in the Oval Office, there are yet other dramatis personae in our political era who come much closer to the tragic heroes for whom Hanson searches. To my mind, the best candidate is the Central American migrant. Trump gleefully slanders these souls with the bestializing terminology of “animals” who “infest our country,” but they’re humans escaping not just poverty but imminent threats of violence. Their tragic action inspires pity, for we find in them Aristotle’s “undeserving victim of adversity,” and with a modicum of empathetic imagination, we also feel fear, recognizing a “person who is similar to ourselves,” a desperate refugee who acts just as anyone would. These migrants are errant in every sense, unwittingly catalyzing familial ruin—the rending of children from their parents’ arms—not through “wickedness” or “evil” but through “ignorance of some material fact” about the cruelty that awaits them at our nation’s border.

But then again, it’s hard to see the perilous flight from poverty and violence as “falling from good fortune into bad.” It’s falling from bad into worse. Unconscionable into imponderable. As it turns out, there’s hardly anything “tragic” about our current political drama—it’s just plain “calamitous.” Trump’s “heroic” story certainly isn’t serious or grand, and it can’t be complete soon enough.