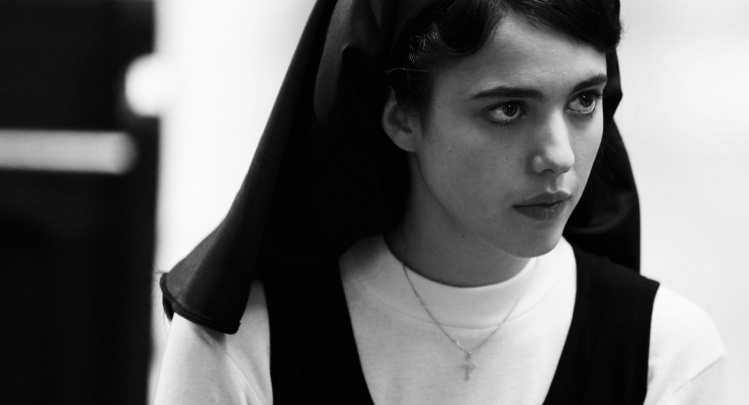 In either a film or a novel, the challenge of capturing the past is to re-create, and allow us to inhabit, outlooks, practices, and passions that have evaporated—that strike us now as benighted or strange. In that strangeness we measure the reality of the human being in circumstances importantly different from our own. The challenge looms especially large for any director hoping to convey to an American audience the lives of cloistered nuns, those “brides of Christ,” as they were lived half a century ago.

Novitiate announces its intention in the opening voice-over, in which a teenaged girl, Cathleen, confesses with whispered urgency, “You are all I could ever want.” She is addressing no less than God himself. Months later, as she takes the vows at the Sisters of the Blessed Rose monastery, she will be asked the ritual questions: “What do you seek? What do you desire?” Writer-director Margaret Betts firmly places the emphasis on that desire, reminding us that faith as experienced by those who pledged their lives to Christ and the church often was driven by passion and the wish for spiritual intimacy. “Beneath it all, we were women in love,” Cathleen comments, from a point of uncertain retrospect.

The setting is 1964, and Cathleen (Margaret Qualley) is seventeen. Growing up in rural Tennessee, abandoned by her carousing father and raised by an irreligious, profane, smoking-and-drinking mom (Julianne Nicholson), she wins a scholarship to a parochial school, where her shy intensity and meditative bent draw the attention of a quietly charismatic nun. Soon, to the baffled dismay of her mother, Cathleen decides to hie herself to the abbey and devote her life to God.

Novitiate seeks to explore the contrast between the daily severity of a life under vows and the intensity of the passion that powers it. The life is one of extreme enclosure—the abbess (Melissa Leo) boasts to the new postulants that she hasn’t left the grounds in forty years. The would-be sisters learn a rigidly structured system designed to foster spirituality through meditation and submission. To this end they receive training in such practices as “custody of the eyes”; prayer recitations and singing of canticles; proper postures for walking; the strict observation of Grand Silence, complete with sign language; and extreme penitential practices such as self-flagellation.

It is a world almost entirely without men; the priest who says Mass—his back turned to the faithful—is little more than a distant mumble. Betts gives us a few scenes in which Cathleen and her friends—teenagers, after all—engage in coltish fun; one fellow postulant gigglingly reveals that she decided to become a nun after watching Audrey Hepburn in The Nun’s Story. But mostly what we observe is the dour inculcation of solemnity. It is a life in which stray thoughts are enemies to be shunned, and the line between the legitimate ecclesiastical power that traces to God and the power that is a mere emanation of someone’s personal lust for authority gets routinely blurred. “Put down your hand, Sister,” snarls the Reverend Mother, when one of her new charges dares to ask for a small clarification. “Postulants don’t ask questions.”

Well, that was then. That priest’s back is turned, of course, because this is 1964—just halfway through the Second Vatican Council, a distant theological and ecclesial rumble that Mother Superior is doing all in her power to ignore. Betts hangs her film’s drama on the unfolding implications of that convocation; her goal, presumably, is to evoke the winds of change that swept through the Catholic world, and the hopes and anxieties it provoked. Might one grant that finding a way to dramatize three-plus years of theological debate and church reform is not easy? Novitiate, at any rate, flounders badly in the attempt. Lines of acceptance and resistance are too neatly embodied in the antagonistic figures of the rigid Mother Superior and the wryly ironic, liberalizing archbishop (played by that able veteran of priestly roles, Denis O’Hare); their confrontation plays out in a laughable scene in which he admonishes her to drop “all that medieval stuff...or else.” Repeatedly we watch as the abbess receives ominous envelopes, containing more bad news from Rome, that she either refuses to open or sweeps from her desk in fury. Drat those evil, modernizing bishops! This aspect of Novitiate comes off as glibly topical, the filmic equivalent of a Time magazine article.

Better is the close attention paid to Cathleen’s spiritual yearnings. Betts shows great tact in portraying the urgency of the girl’s desire for a religious life, and in evoking the perplexity that arises when her need for human contact puts her in conflict with the rigors of her training. The collision of a young woman’s erotic impulses with the stringencies of traditional Catholic religious formation is ripe material for nunsploitation, with its fantasies of suppressed female lusts. But Betts is as doggedly earnest as her novice heroine, and forces us to suppress any impulse of mischievousness and to appreciate Cathleen’s authentic gift of spirit.

Unfortunately, far less tact inheres in the portrayal of those charged with bringing that gift to bear. Melissa Leo’s performance is intense, but the role, all fuming rage and shriveled, shrewish spirit, trots out every tired trope of crazed female authority. There is something distinctly Nazi-like in the way the abbess and two hench-sisters march in to the chapel, as the postulants are chanting a prayer, to lead off two who have fallen short—as if taking them to be shot. You half expect the three to have SS insignia affixed to their habits. The same goes for a scene in which, enraged by the latest communiqué from her archbishop, the abbess humiliates a postulant, forcing her to grovel, weeping, on her knees.

Betts herself is not religious—she decided to make the film after reading the letters of St. Teresa of Kolkata, impressed by the intimate nature of the nun’s yearning for God. It is significant that the film’s two most moving scenes both depict moments in which monastic life oppresses Cathleen: one in which she is overcome with emotion during a visit from her mother, and another in which she and a fellow novice, in an illicit middle-of-the-night encounter, give in to an overwhelming need for physical solace. But no person is on hand to place these human emotions into any spiritual context that might alleviate the burden of confusion they create—only the sadistic Mother Superior, doubling down on the punishment.

One can’t help but warm to the luminous performance of Margaret Qualley (daughter of actress Andie MacDowell) as Sister Cathleen. But the religious life as Betts depicts it is little more than a stifling regimen of deprivation; there is none of the joy found in such films as Into Great Silence, that convey the deep satisfactions of spiritual asceticism. That poetical study of the lives of Carthusian monks provided an authentic glimpse of eternity, and did so with a rapturousness that left you thirsty for a more reverential way of being in the world.  Novitiate sets its sights not on eternity, but pathology. When we are told, in an afterword, that ninety thousand nuns renounced their vocation in the aftermath of Vatican II, it’s hard to know what we’re supposed to think, aside from “They’re free!”

Perhaps a better comparison is Ida, Pawel Pawlikowski’s 2013 exploration of life in a dreary Polish convent, also in the early 1960s. Here, again, Betts’s film falls far short. Pawlikowski exploited the tension between powerful opposites—the ethereal vs. the earthy and erotic; the enclosed safety of the cloister vs. the shapeless dangers of the world outside; the rigidity of Communist-era bureaucracy vs. the sexy fluidity of jazz—and did so in a way that heightened the mystery of faith, rather than flattening it. Ida honored the search for something sacramental, and gave us a church that, however imperfectly, embodied it. Novitiate cartoonishly construes the abbey as a prison, with Mother Superior as its brutal warden, Nurse Ratched in a veil; the film leaves us no choice but to root for Cathleen’s escape.

The Catholic News Service awards Novitiate the classification of O, for “morally offensive.” I’d give it a D—for disappointing.