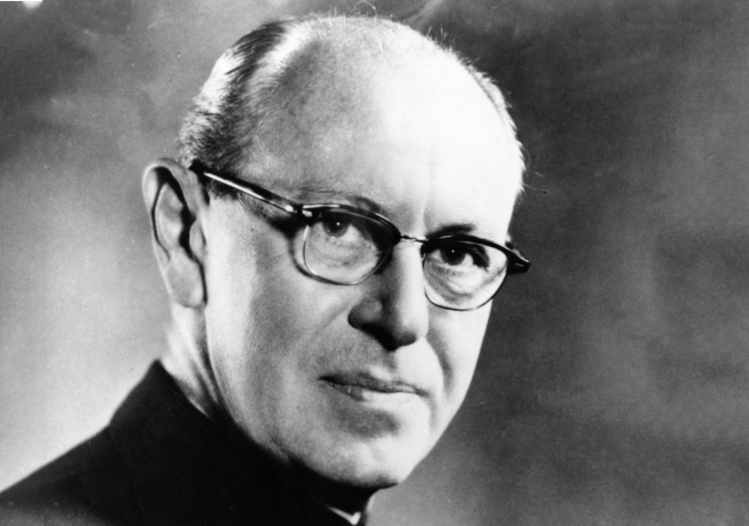 The Roman parable of John Courtney Murray looms large in the modern American Catholic imagination. The Jesuit theologian argued that the First Amendment was in keeping with Catholic orthodoxy at a time when the Holy See still insisted that the American model of religious freedom was a suboptimal church-state arrangement—tolerable only when the optimal arrangement, a Catholic confessional state, was out of reach. Officially censored by the Holy Office in 1954, Murray’s ideas would be vindicated a few years later by the Second Vatican Council, and specifically by the Declaration on Religious Freedom (1965), which Murray himself helped draft. As former Commonweal editor Margaret O’Brien Steinfels once said, it is “the Catholic rule of thumb, that anyone with a good idea for changing Church teaching or practice, I think here of John Courtney Murray, ought to be made to suffer for it.” Yet, so far, we have known only the contours of Murray’s pre-conciliar ordeal. Despite the meticulous historical work of Joseph A. Komonchak, who has been painstakingly piecing together evidence from a wide array of personal, ecclesiastical, and governmental archives, a crucial perspective was still missing: that of the Holy See itself.

The recent opening of the Pius XII–era archives has changed that. In a pandemic-stricken Rome, Vatican archivists have been working against both the clock and the virus to process the huge number of documents from the Pacelli pontificate and make them available to researchers. Scholars, too, have had to deal with sudden interruptions, longer waitlists, and retrieval failures. The Archive of the Congregation for the Doctrine of the Faith (ACDF), as the Holy Office was renamed in 1965, was no exception. By mid-April 2021, however, a new holding finally popped up on the ACDF’s digital research portal: a four-volume file titled “Church and State. Ideology of John Courtney Murray, S.J.” The file contains annotated copies of Murray’s writings and addresses, correspondence to and from the Holy Office (including denunciations of Murray sent by Joseph C. Fenton, Francis J. Connell, and the canonist Thomas O. Martin); and the written evaluations of various Vatican officials.

What fresh insights can be expected from the newly available records? These documents help fill in what had been, until recently, a half-painted picture. Take the example of Murray’s 1950 memorandum to Msgr. Giovanni Montini, who was then Substitute for Ordinary Affairs of the Vatican Secretary of State and would later become Pope Paul VI: “The Crisis in Church-State Relationships in the U.S.A.,” a copy of which Komonchak retrieved among the papers of Claire Booth Luce in the Library of Congress and edited for publication in 2017. Several major questions remained about the memorandum’s exact genesis and its fortunes in the Holy Office. When and how did the document make its way to Rome? Who reviewed it? How did it become part of the dossier used to censor Murray?

While silent about the memorandum’s genesis, the ACDF file can help us answer other questions. We learn that the memorandum landed at the Holy Office in September 1953, bundled with Murray’s Theological Studies articles from 1948 and 1949, and with the responses that Montini had solicited from the three U.S. cardinals (Edward Mooney, Francis Spellman, and Samuel Stritch) and the apostolic delegate Amleto Cicognani. Acknowledging the importance of these responses for reconstructing the cross-Atlantic conversation on religious freedom in the 1950s, Komonchak published the only two he was able to locate, those written by Stritch and Connell, next to Murray’s memorandum. But the context in which these essays were produced remained obscure. We now know that Connell’s comments had been requested by Cicognani, while Spellman—who would later sponsor Murray’s participation as a theological advisor to Vatican II—had sought the expert opinion of John Fearns and William O’Connor, rector and professor of dogmatic theology, respectively, at St. Joseph’s Seminary in Dunwoodie, New York. That means the Holy Office could count on seven responses to help gauge the attitude of the U.S. hierarchy toward Murray and the issues he raised in the memorandum. Scholars finally have access to all these responses as well.

Even more importantly, the newly available ACDF records shed light on how Murray’s ideas were actually perceived in Rome. The Holy Office’s cardinal-members usually relied on expert theologians and canon lawyers (consultores) to review each case that came before them and to indicate the appropriate course of action. Reading the different resolutions (vota) proposed by the consultores who worked on Murray’s case helps us understand exactly what part of his argument was suspect in Roman circles.

These vota reveal a surprising degree of sympathy toward the American Jesuit. They generally acknowledge the good faith of Murray’s attempt to square traditional Catholic teaching on church and state with the reality of increasingly pluralistic societies. While sharing Murray’s concerns, however, even the most sympathetic Holy Office officials remained unpersuaded by his claim that the American religious-freedom regime was a legitimate alternative to the confessional state. The consultores were particularly critical of Murray’s argument that the state need not be confessional in order to ensure the harmony of positive law with natural and divine law. In his 1950 memorandum, Murray argued that a lay state, too, “is subject to the sovereignty of God and it recognizes that its acts and legislation ought to be in harmony with the law of God; but the political form of the State requires that this harmony be effected by the people.” But how would that work, exactly? The Holy Office’s reviewers pressed the point. They argued that a state programmatically unwilling to judge religious truth would not be able to protect Catholic values from their repudiation via democratic procedure. Sometimes majorities were wrong. As embarrassing as the defense of the confessional state was becoming for the Church in the 1950s, the American model seemed like a non-starter.

The consultores’ appreciation for the seriousness of the questions Murray raised, if not for the soundness of his answers, led them to recommend relatively mild disciplinary measures. The German Jesuit Franz Hürth, then a professor of moral theology at the Pontifical Gregorian University, recommended in his votum that Murray be ordered to refrain from holding and teaching propositions that were contrary to the traditional doctrine of the Church—but only actual doctrine, not just the prevailing opinions of particular theologians. By distinguishing these opinions from doctrine, Hürth was not just narrowing the scope of Murray’s censurable infraction but also carving out some space for legitimate scholarly debate on the subject.

Like all historical documents, the newly accessible ACDF sources open as many questions as they answer.
sharetweet

The consultores’ opinions, however, merely constituted the first step in a complex process. Next, the cardinal members of the Holy Office had to discuss the different vota and decide whether to adopt their recommendations or to issue an alternative verdict. A first draft of the Holy Office’s decree on Murray’s case rejected Hürth’s recommendation and outright forbade the American Jesuit to ever write or lecture on the church-state question again. Yet, when Pope Pius XII reviewed this draft together with the vota, he found such blanket prohibition excessive. It would be enough, he decided, for Murray to submit any writings to the Jesuit General Curia for accurate review. Hence came the censorship verdict that scholars are familiar with. We now know that this final verdict was the result of compromise and of the pope’s own mitigating intervention.

Like all historical documents, the newly accessible ACDF sources open as many questions as they answer. What led Pius XII to make his decision on the Murray case? How did this case resemble, or differ from, other comparable cases the Holy Office dealt with during this pontificate? What does this livelier-than-expected debate within the Holy Office reveal about the status quaestionis of religious freedom at mid-century? Further research in ACDF and other Vatican archives is still needed to help scholars answer these interpretive questions.

Still, early findings already suggest that we might soon tell Murray’s story in a different way. Rather than merely exemplifying institutional obstinacy in the face of progress, it might illustrate the Church’s ongoing struggle to find a path between secularism and the confessional state. As Vatican II’s legacy of religious freedom elicits renewed debate in American Catholic circles—and present-day “Murrayites” face the challenge of a new generation of “integralists”—this newly released material from the Vatican archives offers an opportunity for deeper engagement with the relevant historical precedents.

Susanna De Stradis is a PhD candidate in history at the University of Notre Dame.