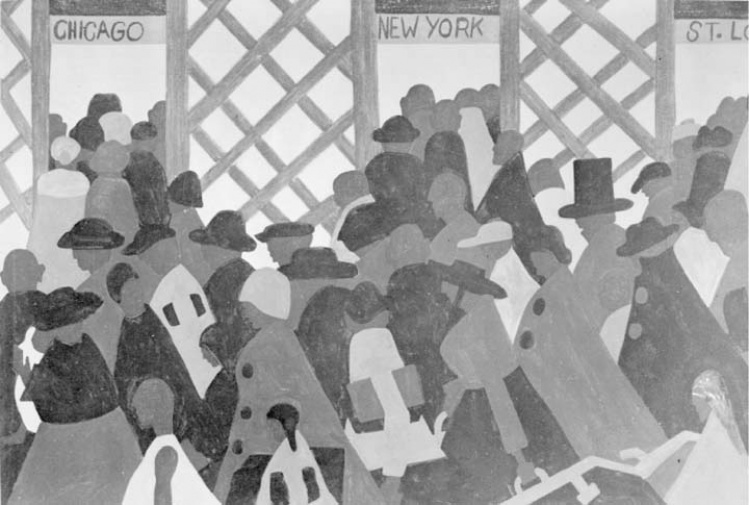 The instinctive pleasure we sometimes get from a work of art usually says more about us than about it. Tell someone you “just love” Mozart’s The Magic Flute or Fra Angelico’s The Annunciation and they’ll ask, “Why?” A fair question. Yet, after  reflecting critically on your initial response, it may be that when you next hear The Magic Flute or see The Annunciation, your first feelings of instinctive pleasure will still be more powerful than any aesthetic analysis you’ve done. That’s how I feel about Jacob Lawrence’s The Great Migration: I just love it.

Lawrence painted the sixty captioned panels of The Great Migration in 1940–41. Each panel, tempera on masonite, is 12 x 18 inches. Together the sixty create a tableau of the journey black Southerners made to Northern cities during and after World War I. Lawrence grew up in Harlem in the middle of the Depression, during the final years of the Harlem Renaissance, a period of intense creativity in African-American music, art, and writing. In the midst of both creativity and poverty, Lawrence painted what he saw and what he knew: strivers and beggars, con men and workmen, children and prostitutes, gamblers and preachers, and above all women, like his mother, Rosa Lee Lawrence, who kept the family fabric together. In 1930, she sent him at the age of thirteen to the Utopia Children’s House for art lessons. There his natural talent bloomed. His teachers supplied him with materials—pencils, paper, and tempera paint—and left him to develop and create his own art. In time, he had access to formal training, worked on WPA projects, and studied the murals of José Orazco and Diego Rivera. Still, Lawrence was remarkably faithful to his own vocation and vision, even to the tempera paints that were his first medium. Simple colors (mostly the primaries) and simple forms (usually angular and overlapping) shaped the core and spirit of his art.

Critics eager to categorize and celebrate his work have called him a primitivist, a cubist, a modernist, and an expressionist. They have compared his use of colors to Matisse and his sense of composition to Stuart Davis. Lawrence neither denied nor accepted the labels of others; he went his own way, painting with tempera on hard board until his death in 2000.

His distinctive format of captioned panels, which he first devised in the late 1930s, portrayed the struggles of Toussaint L’Ouverture, Frederick Douglass, and Harriet Tubman. In laying out the far larger project of The Great Migration, he undertook to tell the story of his own parents as well as thousands of his Harlem neighbors. The subject of each panel was sketched and then painted, one color at a time, over the sixty panels, giving unity of color across a range of contrasting events: the push of Jim Crow laws, lynchings, poverty, and depleted farm land; and the pull of northern jobs, better wages, and the promise of freedom.

A vigorous competition for The Great Migration between New York’s Museum of Modern Art and Washington’s Phillips Gallery was resolved with the even-numbered panels staying in New York and the odd-numbered panels going to D.C. It was at the Phillips that I first saw The Great Migration in its entirety in 1993 and “just loved it!”—a consummate match of color, form, and content. The first panel above all: it depicts a dense crowd pressing toward gates for trains to Chicago, New York, St. Louis. Sharp overlapping angles emphasize the eagerness, even desperation, to leave. After all the subsequent panels evoking those forces of push and pull, the final panel (no. 60) echoes the first. Cast in horizontal lines, it shows a standing, impassive, long-suffering crowd waiting—for a train or, perhaps as Lawrence saw it, for the chance to enter the American dream.

The panels from The Great Migration are joined with other works from the Harlem Renaissance in “One Way Ticket,” an exhibition at New York’s Museum of Modern Art (April 3 through September 7, 2015). Get there if you can. You’ll just love it. 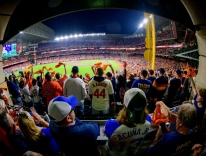 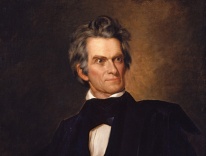