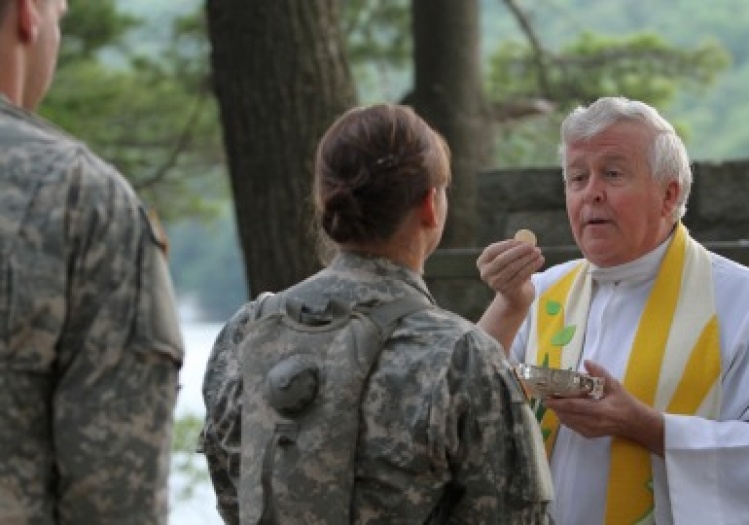 Kim Hansen’s ethnography of chaplains in the U.S. military opens with a memo, sent to the chief of chaplains, explaining the Muslim holiday of Eid, the festival of fast-breaking at the end of Ramadan. The memo provides the relevant dates, suggests ways to accommodate Muslims as they prepare to celebrate, and concludes that “as in the past, a liberal leave policy is recommended.” The details are mundane; what is remarkable is the date of the memo—six weeks after September 11, 2001. “While radical Muslims were claiming that America was at war with Islam and right-wing Christians were arguing that we should be,” Hansen writes, “the military chaplaincy was quietly demonstrating the truth of the matter: that the United States is a nation deeply committed to religious freedom for everyone.”

This study collects over thirty interviews conducted with primarily Navy chaplains in the Southwest. Though its reach is limited by this regionalism, and by the small number of interviews, Hansen manages to include a diverse collection of denominational and religious affiliations, and to explore some of the most compelling conundrums confronting today’s military chaplaincy. What constitutes a religion—and who decides? Where is the border between religious expression and proselytizing? How can military chaplains serve a religiously diverse population while maintaining their own theological commitments?

Chaplains are first and foremost members of the military. They wear military uniforms, not the clerical robes of their religious affiliation. And although they are not permitted to carry weapons, and are usually referred to as “Chaplain” rather than by their rank, they are expected to prioritize good order and discipline over theological or denominational allegiances. Nonetheless, military chaplains are protected by the Geneva Conventions, and by denominational endorsing agencies that can adjudicate when the military is perceived to be compromising their religious obligations. According to the Geneva Conventions, chaplains are noncombatants and are afforded special privileges if taken prisoner—for example, they must be allowed to worship and cannot be assigned any labor or tasks beyond ministering to others.

What, then, is the exact relation between chaplains and the military’s core mission of fighting and winning wars? Some theologians worry that chaplains are exploited by the military as a way to endorse state-sponsored violence. As Paulette Otis notes in a recent essay cited in The Review of Faith and International Affairs, “Spiritually-fit fighters are presumably more capable on the battlefield.... Soldiers who are healthy, emotionally, psychologically as well as physically, are more efficient and effective in the fight.” The state, she argues, has appropriated the chaplaincy as a way to authorize its own righteousness. In opposition, in another essay cited in the same issue, Miroslav Volf argues that as the military’s role increasingly focuses on peacekeeping and reconciliation, military chaplains can function as agents of reconciliation—their understanding of religious teachings, rituals, and practices giving them more credibility with local religious leaders and helping them bridge differences and ameliorate conflicts.

Hansen tentatively explores the place of theology among chaplains by asking, “Why don’t military leaders seem to fear prophetic criticism from their chaplains?” Chaplains, he writes by way of an answer, “understand that the prophetic voice, whether grounded in civil religion or religion proper, is muted by the necessary depoliticization of the professional officer corps. Chaplains may also calculate that in times of controversy and peril, ‘their’ sailors and marines will need them more than ever and that they can do more good devoting their time to serving them than to engaging in politics.” Here, Hansen assumes that “religion” and “politics” are clearly distinct, and that religion addresses the “private and emotional needs” of the flock rather than the social and cultural realities around them. This distinction is not fully persuasive. How, for instance, amid the theological and political controversies regarding the repeal of “Don’t Ask, Don’t Tell,” can one separate the theological from the political? How to know whether that separation is what is required—whether it is just, or responsive to either one’s faith or one’s party affiliation?

Overall, it is difficult not to join Hansen in concluding that most members of the chaplaincy have implicitly accepted the superiority of state authority over church authority, and that “on questions of war and peace, faith and violence, chaplains are either unwilling or unable to effectively challenge the military’s definitions of the situation.” I am reminded of a quip by Stanley Hauerwas to the effect that if Christians were truly Christian, the U.S. military would be more afraid of Christian soldiers than of gay ones. It is a rather sad reminder of how gutless much of Christianity has become that it can be so readily appropriated and accommodated by a quintessentially bureaucratic and rigid institution.

Nevertheless, this book’s analysis of the military chaplaincy frequently reveals religious sensibilities that are robust and flourishing. Hansen is particularly adroit at detailing the ways in which military chaplains negotiate the difference between proselytizing and witnessing. Where proselytizing is often associated with “stealing sheep from other chaplains’ flock,” Hansen notes that “there is no prohibition against witnessing,” since witnessing “entails just the expression of my religious beliefs and an invitation, not for people to assume my beliefs, but an invitation for people to receive Jesus Christ as he is portrayed through Holy Scriptures.”

Despite the powerful example of religious pluralism with which Hansen begins his book, dilemmas and tensions persist in the military chaplaincy. The most obvious is the tension between the Constitution’s anti-establishment clause and the right to religious freedom and expression. Does the salaried employment of chaplains violate the anti--establishment clause?  When command is implicitly sanctioning religious practices, are those practices state-sponsored? Are they covertly coercive? On the other hand, how much religious expression and accommodation must the military effect in order to fulfill the promise of religious freedom?  And to what extent must chaplains facilitate beliefs and practices with which they radically disagree?

Several interviews take up this last question. As one chaplain jokes, “If a sailor or marine wants to worship green frogs on flat rocks, I’ll get him the flat rocks, but I’m not leading the worship service.” Of course, some tensions are more critical—and questions more confusing—when it comes to facilitating the practices of Satanists, white--supremacist churches, or even Wiccans. For instance, does the use of shared sacred spaces desecrate the space if white supremacist church members use it? Primarily, chaplains fall back on a broad use of “good order and discipline”: if a practice or worship is perceived to threaten good military order and discipline, the chaplain is authorized to prohibit it. On many occasions this authorization has given chaplains rather wide latitude, including on one occasion enabling them to prohibit a member of the Nation of Islam from preaching that America is an evil empire.

Still, as some chaplains note, it may actually be easier to explore new religions in the military than it is in civilian life. “It gives people more opportunity,” remarks one. “If you’re in Grand Forks, North Dakota, and you want to become a Wiccan, and you tell your boss at Safeway, he’ll look at you like ‘Are you nuts?’” Not in the U.S. military. “We have an office,” the chaplain continues, “and officers whose job it is to make sure this stuff happens.”

But “making sure stuff happens” can be tricky. The motto for the military chaplaincy is “cooperation without compromise”: chaplains are expected to look for what they have in common with other religions, but not to compromise their own religious beliefs or ignore the requirements of their own faith groups. For example, in 2011, prior to the repeal of “Don’t Ask, Don’t Tell,” twenty-one Christian endorsing agencies, concerned that the repeal would require facilitating same-sex marriages, asked the military to adopt “broad, clear and strong protections for conscience.” Although an additional clause was not provided, the Department of Defense made considerable effort to insure that chaplains were not required to violate their conscience, even as they adhered to military policy regarding the right of homosexuals to serve.

Many of the chaplains in Hansen’s study complain that the military’s commitment to religious pluralism—the effort to include everyone and be attentive to the diversity of beliefs—sometimes made them feel they were practicing “religion lite,” offering “the lowest spiritual denominator with the loss of theological particularity and perhaps of truth.” Christian chaplains seem the most likely to feel the restraints. “Rabbis are able to pray in their faith tradition, Muslims are able to pray in their faith traditions, and Christian are very often not allowed to pray in our faith traditions,” complains one. “We can’t say Jesus, and they can say Allah until the cows come home.” (Indeed, court cases have taken up the issue of whether the military can tell chaplains how to pray, including a 2006 case in which a Navy chaplain was required to say “Lord” rather than “Jesus” when he prayed outside the military chapel; though he was discharged for his refusal, Congress eventually overturned the policy requiring the seeming oxymoron of “nonsectarian prayers” at public military events.) Other chaplains in Hansen’s study, however, insist that religious pluralism actually helps them grow in their own faith traditions. Some feel more motivated to understand the particularities of their own traditions; as one chaplain notes, “It forced me to make sure I know what I believe.”

The military chaplaincy serves many functions. As Hansen argues, it provides a setting for moral dramas “in which we act out our understandings of who we are and how we ought to live.” As such, it embodies some of what is best about contemporary American religious life—as well as some of its most vexing paradoxes. That the military chaplaincy is nearly as old as the republic itself augurs well for its continuance. Yet it is also clear that the current turbulence churning in the relationship between religion and the state will continue to be fought and negotiated in this vital military institution.