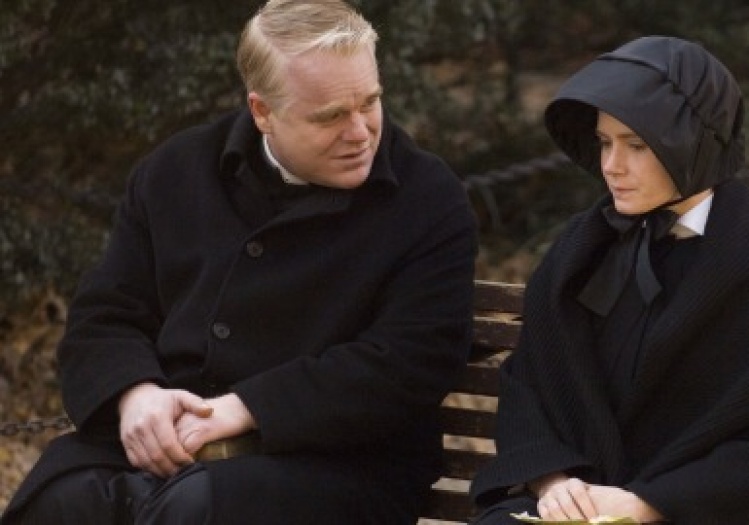 The late Philip Seymour Hoffman, who died in February at the age of forty-six, was an actor of genius. In its obituary, the New York Times claimed that he “was perhaps the most ambitious and widely admired American actor of his generation.” One should add, however, that Hoffman’s ambition had to operate within the cramped zone reserved for “character actors.” He was disqualified from most of Hollywood’s leading-man roles by his looks, which were pudgy, rumpled, and—depending on the role and the cinematography—sometimes sinister or prematurely old. I know it sounds shallow to describe an actor’s scope according to his physique, but it’s naïve to pretend that sex appeal doesn’t make a crucial difference in the way a film career proceeds. (Actresses suffer this typecasting a thousand times more than men do.) Because of his looks, Christian Bale can be either a leading man or a character actor as the occasion demands. He can pack on the pounds for American Hustle or starve himself into wraithhood for The Machinist, but he also has the option of reverting to his handsome self for romantic roles. Hoffman didn’t have that option.

What he had instead was the greatest range of any character actor of his generation. His filmography is stupendous in both its length and its variety. He played smug, slimy creeps in The Talented Mr. Ripley, The Big Lebowski, Scent of a Woman, and Red Dragon; pathetic losers in Flawless, Nobody’s Fool, Boogie Nights, and Happiness; complex, tormented men, equally capable of decency and loathsomeness, in A Late Quartet, Doubt, Before the Devil Knows You’re Dead, and Synecdoche, New York; profane but good-hearted henchmen in The Ides of March and Charlie Wilson’s War; sweet-tempered but baffled nice guys in Moneyball and Magnolia; and genius writers in Capote (which won him an Oscar) and Almost Famous. He even played a supervillain bent on world domination, as he did in Mission Impossible III. And he could plumb Dostoyevskian depths: the pathetic, frightening, often despicable but oddly patriarchal megalomaniac Lancaster Dodd in The Master was, in my opinion, the actor’s masterpiece.

I’ve clumsily sorted these performances into broad categories, but Hoffman did not really play types. His genius individualized even the creeps: the globetrotting upper-class playboy in Ripley was repellent in a way quite different from the slimeball tabloid journalist in Red Dragon. And Hoffman’s roles differed not only in psychological quality but in length and prominence. In Capote, The Master, Doubt, and a few others, he had the lead, but often he filled supporting parts, and occasionally he did a walk-on that you would miss if you blinked. Director Joel Schumacher had it about right when he said in 2000, “The bad news is that Philip won’t be a $25-million star. The good news is that he’ll work for the rest of his life.”

Because of a heroin addiction, that life turned out to be all too brief. Did some premonition of an early death drive him to cram in as much work as possible, or is that just a retrospective illusion? Just as it’s hard not to find an apprehension of mortality in the youthful intensity of Keats’s poetry, it will now be hard not to think of Hoffman’s busy career as a race against the clock.

Hoffman was born and raised a Catholic. We should probably wait until some (hopefully) perceptive, well-researched biography reveals just how his early religious training affected his art (if it did) but let me venture one tentative suggestion: Catholicism (and non-Calvinistic Protesantism) posits the democracy of the dead, the idea that we are all, as Dickens put it, “fellow travelers to the grave.” There is no spiritual elect, and no one is spiritually doomed. We work out our own fates, choice by choice. It’s possible that this idea fed Hoffman’s hunger to scoop up every role, no matter its size, no matter how sympathetic or repellent, and play it for all it was worth. No actor, of course, can afford to judge the person he or she must inhabit, but a Catholic actor might be especially attuned to whatever is salvageable in a loathsome character, as well as to the spot of vileness in a saint. As David Fear wrote in Rolling Stone, “No modern actor was better at making you feel sympathy for…idiots, failures, degenerates, sad sacks, and hangdogs dealt a bum hand by life, even as—no, especially when—he played them with all of their worst qualities front and center.” But Hoffman also had a knack for projecting goodness, whether the simple goodness of the nurse in Magnolia or the complicated, bristling benevolence of Lester Bangs in Almost Famous.

Hoffman’s versatility conveyed little of the giddy, let’s-dress-up fun that you get from the physical shape-shifting of an Olivier, a Brando, or a Streep. Oh, now and then an almost unnoticeable mustache would appear; the hairline went up and down a bit; a few pounds would be added or subtracted from his stocky frame. (He didn’t discover theater until an injury forced him off his high-school wrestling team.) But the real metamorphoses took place in the set of his features and the focus of his eyes. More than any actor I know, Hoffman delineated his characters by the way he looked at the people sharing a scene with him—the differing degrees of attention, affection, suspicion, respect, or contempt. It was as if Hoffman, all too aware that he wasn’t eye candy, had determined to cajole the viewer into sharing his character’s outlook and opinions. If you don’t like to look at me, then look with me. Get behind my eyes. This gift could be particularly devastating when the role was ambiguous, possibly sinister. In Doubt, for instance, was the priest he played gazing on his charges with true benevolence or with the intentness of a pedophile? We were drawn just close enough to the man to make us feel the beginning of repugnance, but it was an uneasy repugnance, since the priest might yet turn out to be innocent. Hoffman’s performance certified the film’s title.

Now the man is gone, the career ended. His ongoing artistic quest has been frozen into an oeuvre. One would like to think that the best of that oeuvre expressed what was best in him. If so, how convenient for us, how little comfort for his loved ones.