No Time to Waste 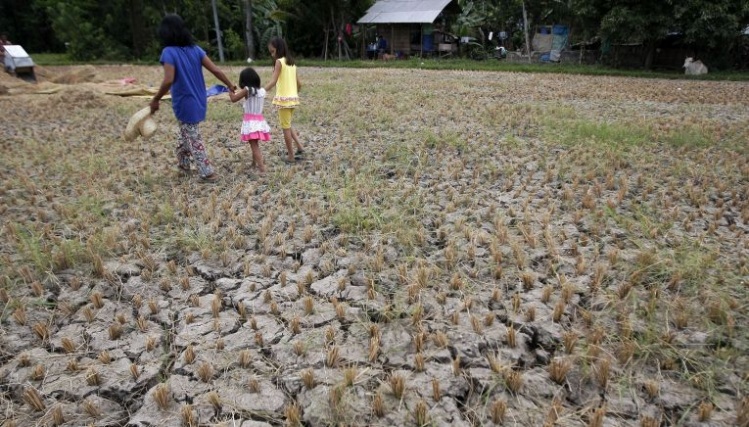 Each year, the planet breaks another global-warming record. Each month, we hear more stories of record-breaking droughts, heat waves, floods, fires, and extreme weather events that are supposed to occur only once a generation. And each new study seems to suggest that critical triggers like melting polar ice caps are coming much faster than expected.

Welcome to the reality of climate change, the most important and neglected moral crisis of the twenty-first century. It might be a leading priority for Pope Francis, but it barely registers on the U.S. political radar, especially in this heated campaign season. This is despite the fact that climate change is already hurting large parts of the country—from the worst drought in California in a generation to catastrophic flooding across the Southeast.

Yet the main victims of climate change do not live in the United States. They live in the world’s poorest countries and the world’s most volatile regions, where the fallout from climate change is already killing an estimated four hundred thousand people each year. If we add the pollution caused by burning fossil fuels, that number rises to almost 5 million. The effects of climate change are particularly acute in parched regions like the Middle East and North Africa. Despite the visibility of the Syrian civil war—and the refugee crisis to which it led—few Americans appreciate that the conflict has at least some of its roots in climate change. From 2006 to 2010, Syria suffered its worst drought in recorded history, causing 85 percent of herders to lose their livestock and 75 percent of farmers to lose their crops. The same dynamic is playing out elsewhere, including in the Sahel region of Africa, where the encroaching desert pushes the (predominantly Muslim) pastoralists into the path of the (predominantly Christian) farmers. Is it any coincidence that violent religious extremism—from ISIS to Boko Haram to Al-Shabaab—has flamed up in these drought-prone tinderboxes?

And all this comes after a global temperature increase of only 1 degree Celsius over pre-industrial levels. Scientists tell us that, unless something is done, there will be a four-to-six-degree increase by century’s end. This would be catastrophic. The Stern Review—one of the first attempts to quantify the costs of climate change—suggested that it could cause economic disruption greater than the two world wars and the Great Depression combined. And the political consequences would be just as bad: whole areas of the Middle East and North Africa would no longer be fit for human habitation, and hundreds of millions of people in South Asia and elsewhere could be displaced. In such a scenario, the current refugee crisis will look like a minor warm-up act.

The poor are climate change’s cannon fodder. They bear the least responsibility for climate change but will suffer its worst effects. The World Bank estimates that climate change could push 100 million people into extreme poverty by 2030. The poorest 3 billion people account for a mere 6 percent of the carbon emissions that threaten our collective future, but they will be the first to go hungry when crops fail. In a very real sense, the poor are doing penance for the sins of the rich.

The world’s leaders have done little to avert this looming crisis. Despite the lofty commitments made at the Rio Earth summit in 1992 to limit greenhouse gas emissions, governments have failed to act with courage, prudence, or justice, choosing instead the easy road of indifference, obfuscation, and finger-pointing. And so the inevitable happened—the concentration of carbon dioxide in the atmosphere surpassed 400 parts per million. That number may mean little to most people, but consider this: these levels were last reached 3 million years ago, when sea levels were at about six meters higher and the global mean temperature was 7 degrees Celsius warmer than today—and humans did not exist. This is what keeps the experts awake at night.

In December 2015, world leaders finally pledged to reduce greenhouse gases as soon as possible and to move toward zero carbon emissions in the second half of the century. This is an ambitious goal, but it’s what’s needed to keep the planet from warming more than 2 degrees Celsius. The Paris Agreement—signed by 196 countries—is the most important international agreement in seventy years. Still, it could have been stronger: it relies on voluntary national plans, which, for now at least, are not nearly ambitious enough. In the end, the success of the Paris Agreement will depend on the strength of domestic political will.

Which brings us back to the United States in this election year. In line with the Paris Agreement, the Obama administration submitted plans to reduce emissions by 26 to 28 percent by 2025 (from a 2005 baseline). It aims to do this mainly by means of regulating power-plant emissions and improving fuel-efficiency standards. This is a positive first step, but the real work will come later with the larger shift to renewable energy. By continuing to invest in natural gas—on the grounds that it is cleaner than oil and coal—energy companies are making that shift even harder than it would have been otherwise.

If elected, Hillary Clinton promises to follow through on the Obama commitments, which would cut emissions by 80 percent by 2050. This is consistent with the decarbonization path laid out in the Paris Agreement. Clinton promises an “energy revolution,” generating enough electricity from renewables to power every home in America. Yet it is not clear how exactly she would accomplish this.

Donald Trump, by contrast, promises to undo all of Obama’s regulatory actions, ramp up investment in fossil fuels, and “cancel” the Paris Agreement. He would be the only world leader to reject the scientific consensus on climate change. Trump enjoys staking out extremist and inflammatory positions, but his energy policy is very much within the Republican Party mainstream. Even under a Clinton presidency, Republicans in Congress and state-level governments will be doing whatever they can to hinder action on climate change. Even the Republican justices in the Supreme Court are playing their part, blocking the implementation of Obama’s power-plant emission rules.

WHY IS CLIMATE-CHANGE denialism and resistance to climate action so prevalent in the United States? One answer is that the sheer scale of the challenge, combined with its uncertain effect on lifestyles and living standards, invites fear and anxiety. And the diffuse and long-term nature of the problem tends to damp down urgency. Yet these are universal instincts. The more specific American resistance comes from a particular trifecta of ideology, theology, and money.

The ideological aversion to climate action stems from a libertarian mentality that downplays any collective action that might threaten individual freedom or second-guess free-market outcomes. But this stance is self-defeating. Economists agree that climate change entails a massive market failure, because polluters are not paying the full social costs of their activities. According to the IMF, this contributes to fossil fuels being subsidized to the tune of almost 4 percent GDP each year in this country. This tilts the playing field drastically, making it much harder for renewables to compete. The solution is to level the playing field by making polluters pay, ideally with a carbon tax. Yet the libertarian mentality has succeeded in turning the word “tax” into a dirty word.

This ideology goes hand in hand with American exceptionalism—the idea that God has bestowed his special favor on the United States and its people, promising material prosperity and blessing the unlimited exploitation of bountiful natural resources. A subspecies of American exceptionalism is climate exceptionalism—the average American emits seventeen tons of carbon dioxide a year while the average citizen of the European Union emits just seven tons. There is little reflection on the implications on such a carbon-lavish lifestyle.

The third and possibly most significant factor is the avalanche of financial opposition. The math is clear: limiting the global-temperature increase to 2 degrees Celsius means that 80 percent of available oil, coal, and gas reserves simply cannot be used. This amounts to $20 trillion dollars in assets the energy companies will not part with willingly. To protect their access to those assets, they spend a lot of money spreading misinformation and vigorously opposing any attempt to challenge their financial advantage. In this, they are allied with the ideologues, and abetted by a media unwilling to present the scientific consensus accurately. And the outsized influence of money in politics means that these vested interests can hold politicians to ransom.

Despite these obstacles, there is cause for hope. The world is undergoing a renewable-energy revolution, as technology advances and costs become increasingly competitive. There are now more U.S. jobs in solar than in either coal or oil-and-gas extraction. One expert suggests that reducing emissions by 80 percent by 2050 would only cost somewhere between $42 billion and $176 billion a year (in contrast, the annual military budget is around $600 billion). And states like California are forging ahead with ambitious decarbonization strategies.

In short, we now have the technical and financial means to undertake the energy transition; what we need is the political will. Climate change is one of the leading moral issues facing voters, and it must be treated as such. Politicians and business leaders must be held accountable for their positions. This includes decarbonization, but it also includes financial assistance to poorer countries—to help them transition to clean energy and cope with the unavoidable effects of the climate change already underway—and to American workers who will be displaced by the energy transition. This is in keeping with Pope Francis’s call in Laudato si’ to show solidarity with the poor and the planet, with today’s generation and tomorrow’s, with our fellow human beings and all of creation. It is time to treat this issue with the moral and political seriousness it deserves.