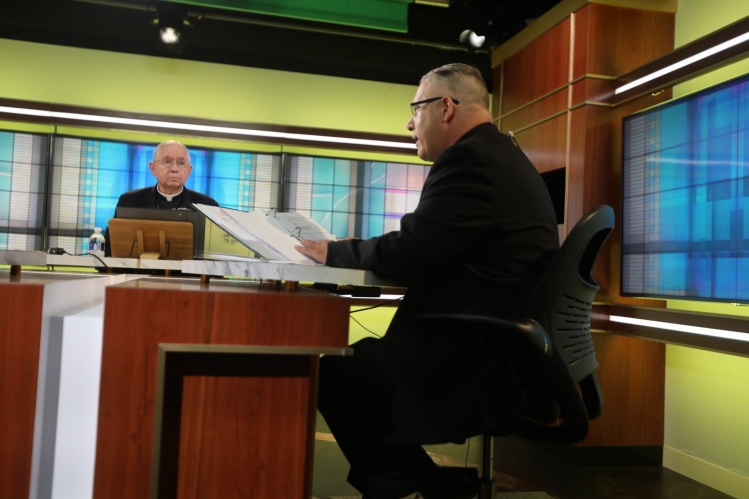 It’s odd to see Catholic media take a starring role in the ongoing saga of the breakdown in traditional journalistic values, but the web-based startup the Pillar has managed to do that with a story that speculated on the sex life of a prominent priest.

As anyone following Catholic media knows, the Pillar outed Msgr. Jeffrey D. Burrill, the now-former general secretary of the U.S. Conference of Catholic Bishops, as a priest whose cellphone was inside a gay bathhouse in Las Vegas on June 22, 2018. To do this, the Pillar acquired the “commercially available” but anonymous location data emitted from the Grindr app it said was on Burrill’s cellphone, then identified him by matching locations to his family vacation home and similar places. And then there was the visit to Entourage in Vegas, the one specific piece of allegedly incriminating evidence the Pillar scraped up from scrutinizing a year of Burrill’s movements (besides his simply having the hookup app on his phone). Burrill resigned from his position on July 20.

As the Washington Post reported, it was “the kind of story mainstream news organizations would be unlikely to touch.” But the traditional journalistic standards for privacy and verification continue to unravel as younger media organizations, eager for attention, publish what legacy media would reject under its hallowed ethical rubrics. So in 2017 BuzzFeed News published the explosive allegations against Donald Trump in the Steele dossier even though they couldn’t be verified. In 2012 Gawker posted a sexually graphic video of Terry Bollea (aka professional wrestler Hulk Hogan) even though its news value was dubious. And now we have Msgr. Burrill’s phone caught in an establishment that advertises itself as “Where the Hot Guys Go.”

Journalistic values are moral values, encoded in ethics guidelines that seek to balance the public’s need for information and the individual’s right to privacy. One reason I enjoy working in journalism is that there are so many moral decisions to make, often quickly. Deciding which stories to pursue and which to bypass can be a moral decision. Writing the story—what to prioritize, what language to use—can be a moral decision. I realized this when serving as city editor at Newsday’s New York City edition in the late 1990s—so many quick decisions to make. Later, I taught journalism ethics as a professor, trying to pose difficult scenarios for the students to consider.

The news organizations that break ranks to report such stories as the Steele dossier, the Bollea video, or the monsignor’s hookup app justify their actions on the basis of the news value of the information at issue and the need for transparency and accountability. My initial reaction to the Pillar story was to recall that a jury awarded Bollea $140 million for invasion of privacy and infliction of emotional distress for posting a video of him engaged in sex with the wife of a radio host he knew.

In its article, this is how the Pillar set out the case for the news value of reporting that app data suggested Msgr. Burrill is gay: that he is “widely reported to have played a central role in coordinating conference and diocesan responses to the [clergy sexual abuse] scandals, and coordinating between the conference and the Vatican.” In a subsequent story, the Pillar reported that it had decided not to seek the identities behind Grindr pings located at ten rectories in the Archdiocese of Newark absent some “compelling public interest regarding individual priests.” That is, the privacy rights of those involved outweighed the news value of reporting on their sex lives.

Where was the copy desk on this? Perhaps there isn’t one at the ‘Pillar.’
sharetweet

Gawker lacked a shred of news value for its story, which led to an award (eventually reduced to $31 million) that drove it under. the Pillar has a better case for its article’s news value, saying that while Burrill was involved in important meetings at USCCB and in Rome on clergy sexual abuse of minors, “Data app signals suggest he was at the same time engaged in serial and illicit sexual activity.”

One can be glad that journalists who are faithful Catholics—such as the Pillar founders JD Flynn and Ed Condon—would want to call powerful clergy to account with the ultimate aim of protecting children. But they just don’t have the facts to justify making this accusation, an assertion needed to boost the story’s news value. the Pillar devotes about a thousand words of a roughly 2,800-word article presenting a very one-sided argument that Burrill may possibly have used his app to connect with minors for sex, despite acknowledging there was “no evidence” after scrutinizing a year’s worth of his daily travels. My reaction to this was: Where was the copy desk on this? Perhaps there isn’t one at the Pillar.

Flynn, formerly editor of EWTN’s Catholic News Agency and former chancellor of the Archdiocese of Denver, and Condon, who previously worked with Flynn at CNA, started the Pillar in January with a soaring expression of their journalistic values:

We believe that serious Catholic journalism is a service to Christ and the Church—and that journalism can be done in a uniquely Catholic way, which takes the doctrine of the Catholic Church to be true, which treats people with respect, and which looks for the truth above all else, without getting bogged down in partisan agendas or mudslinging.

We think the story matters more than we do, and we’d rather tell you the facts than tell you what we think. We aim to focus on the facts, and to provide the context and background that helps make sense of them. The Pillar upholds the highest standards of journalistic independence and craftsmanship. We're independent of any ecclesial agenda but the holiness of the Church and its members—we won't be afraid to tell the stories that need to be told, but we'll tell them with integrity and fairness.

The Burrill story flunks these standards in various ways. If it provided the context and background needed to understand the facts reported, it would have at least included the mainstream view—featured in the John Jay College study done for the USCCB—that homosexual priests were no more likely to sexually abuse minors than heterosexual priests.

If the story were crafted properly, the writers would have made some effort to identify the source of the “commercially available” data it used. Even if the source was granted anonymity, it was necessary to give some hint of what the source’s agenda might be, as well as the reason the source wanted to be anonymous (assuming that is the case). For that we are left to read a story that EWTN executive Alejandro Bermudez published with CNA, the Pillar duo’s former employer, on July 19. It disclosed that in 2018 “a person concerned with reforming the Catholic clergy approached some Church individuals and organizations, including Catholic News Agency” with the app data. That vaguely signals some kind of agenda, which is more than the Pillar story acknowledged. (CNA took a pass on the story.)

If the Pillar were upholding the highest standards of journalistic independence, it would disclose who its funders are and identify any who might have funded the expensive business of acquiring such “commercially available” data. The story seems to be crafted to endorse the “ecclesial agenda” of the source who provided the data, presumably an agenda that rejects the John Jay study’s conclusions on the sexuality of gay priests.

It’s especially necessary for the Pillar to provide greater disclosure given the past employment of Flynn and Condon. Both are canon lawyers who have worked within the Church’s legal system. Condon’s online bio notes that he is a practicing canon lawyer who has worked in dioceses on three continents and in the Holy See. Flynn came to journalism at EWTN already being identified with the conservative culture warriors among the U.S. Catholic bishops, having served as a key aide to Denver Archbishops Charles Chaput and Samuel Aquila, and then James Conley, bishop of Lincoln, Nebraska. Somehow the story about Burrill—whom Flynn described in a CNA column last summer as “theologically orthodox, intelligent, and pastoral”—detours to repeat past criticism of one of the leading liberal bishops, Robert McElroy of San Diego.

The Pillar has sought to justify its poor journalistic judgment by noting that the New York Times ran a piece in February “in which reporters used app signal data to identify and name a participant in the January U.S. Capitol incursion, even after he denied participation,” and “did not prompt similar reaction.” But the Times piece, written not by news reporters but writers from the opinion staff, was crafted more responsibly. Information was provided on the source’s motives, and the reason that anonymity was granted. It acknowledges that the location data can be imprecise, and that it could not confirm that the one person identified in the story was really inside the Capitol on January 6. Ultimately, it was not an investigation aimed at piercing the privacy of individuals who allegedly tried to disrupt the electoral process but “a demonstration of the looming threat to our liberties posed by a surveillance economy that monetizes the movements of the righteous and the wicked alike.” The Pillar has led us further down that road.