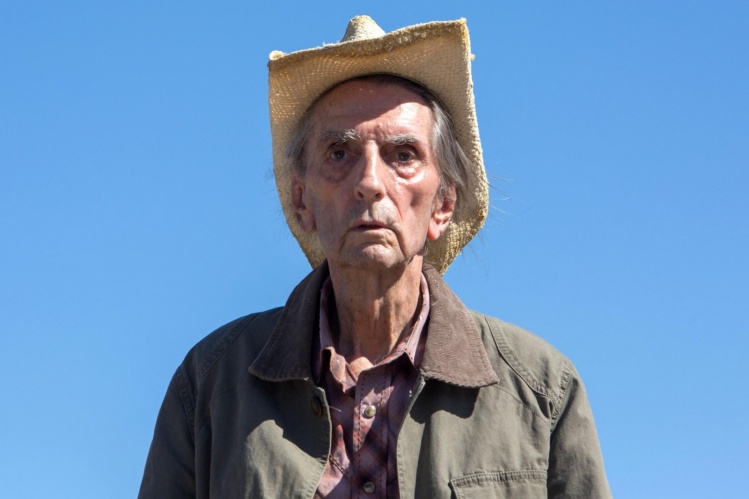 The early moments of director John Carroll Lynch’s drama Lucky establish that its title character is a creature of routine: Harry Dean Stanton wakes, lights a cigarette, finds some norteno music on the radio, does his yoga stretches in the dusty living room of his desert bungalow, and walks to the diner in town to work on the crossword puzzle. It suggests too how habit might be the key to his longevity: Lucky as portrayed by Stanton—ninety at the time of filming and essentially playing himself—remains spry and alert and, alas, keenly aware of the dwindling hours, even if at first he doesn’t admit as much. Moments after a tight shot of Lucky sponge-bathing, we see him train his deep-set gaze on the blinking red “12:00” on the clock of his coffee maker. Yet another day; how many more might follow?

In real life, it proved to be just a little more than a year’s worth: Stanton died in September, some fourteen months after shooting on Lucky wrapped. Fans (and I am one) got a brief look at him this past summer, thanks to a small recurring role in the return of David Lynch’s Twin Peaks. Lucky affords us another, far more intimate encounter, made more poignant in that it arrives posthumously. I am of the cohort that came of age to Stanton’s memorable 1984 two-fer: Wim Wenders’s Paris, Texas, and Alex Cox’s Repo Man. The former gave the then fifty-eight-year-old actor his first leading role; the latter drew on his cult status to further cement it (“Repo man’s always intense. C’mon, let’s go get a drink!”). By this time Stanton was already well into a career that would by the end include more than one hundred films and television series, among them Cool Hand Luke (1967), Cisco Pike (1972), Pat Garrett & Billy the Kid (1973), Alien (1979), Pretty in Pink (1986), both Straight Time (1978) and The Straight Story (1999), and HBO’s Big Love (2006 to 2009). In watching Lucky it’s possible to see and even hear some of these characters again, their visages discernible in the palimpsest of Stanton’s famously drawn face, their voices audible in a multi-register growl that is at turns bemused, puzzled, and deeply pissed off.

The film itself is what might be called a small one; the protagonist is featured in every scene, playing off a modest ensemble that includes Ed Begley Jr. (wonderful as a doctor amazed by Lucky’s stubborn good health), Ron Livingston, David Lynch, and Tom Skerritt (who in a too-brief appearance trades war stories with fellow veteran Lucky). There are long shots of Lucky walking the streets of his small desert town as he makes his daily rounds, unavoidably evoking Travis Henderson’s perambulations in Paris, Texas. His doctor says he’s fortunate to be able to examine his condition, to contemplate the significance of mortality and eternity, not like people whose health or mind have long since failed them by this age.

Existential gloom is not brand-new to Lucky
sharetweet

Such clinical detachment is beyond Lucky. As one nearly identical day gives way to the next, he sticks to his belief that there’s no such thing as a soul, that we are nothing, that only blackness and the void await. This confident atheism is shaken when he collapses in his kitchen. To one unlikely confidante he admits that he’s scared. Existential gloom is not brand-new to Lucky: he recounts his terrifying realization at age thirteen that the universe is a vast, empty expanse; he recalls his perilous wartime duty aboard an ammunition ship, a “floating stick of dynamite” that by sheer good chance escaped destruction by an approaching suicide pilot.

There is no sunset conversion, though, and thank goodness for that. John Carroll Lynch, product of a Jesuit high school and graduate of Catholic University, has said he wanted to treat Lucky’s atheism as a kind of faith, subject to its own tests and trials: What happens when the protective carapace of “realism” is punctured? What to do when even hardened disbelief isn’t up to the task?

The Skerritt character’s tale of a young Japanese girl rushing toward invading American soldiers with a wide smile on her face, a Buddhist preparing to cross into paradise, quietly helps Lucky accept the fact of his mortality. If this epiphany is overplayed, it’s just by a hair, one off-key moment in a film that otherwise strikes clarion notes. Most notably: a child’s birthday party at which Lucky finds himself an unexpected guest. A mariachi band plays, a piñata is split, the family sings a traditional Mexican song as the cake is cut. Then, Lucky, solitary and at the edge of the crowd, offers a wavering rendition of “Volver, Volver.” “I am going back, going back,” he sings in delicately enunciated Spanish. Delighted guests soon start singing with him; one begins to record it all on his phone. Stanton was an accomplished singer (recall his “Just a Closer Walk with Thee” in Cool Hand Luke or “Walking Cane” in Straight Time, or listen to his 2014 album Partly Fiction), and the scene marks the emotional high point of this absorbing film. His final cinematic performance is perhaps his best, maybe owing to the fact that much of Lucky’s story is Stanton’s own. The film is a humble celebration, a quietly glorious send-off for a singular American talent, but it’s also Stanton’s priceless parting gift to us.