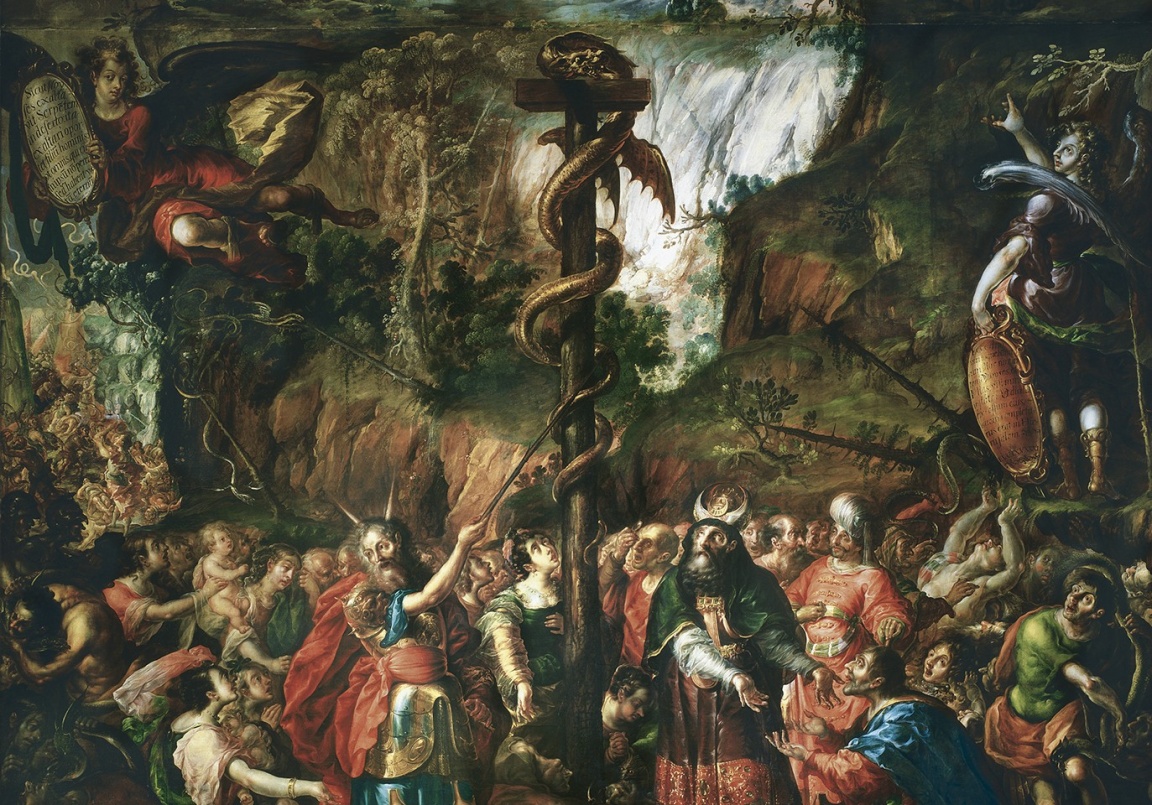 “From Colonial Mexico, a Towering Vision of Grace” was the headline for the New York Times rave review of the exhibit “Cristóbal de Villalpando: Mexican Painter of the Baroque,” which opened late in July and closes this Sunday. The main attraction is a monumental altarpiece, Moses and the Brazen Serpent and the Transfiguration of Jesus (1683), on loan from the city of Pueblo’s cathedral. Praising de Villalpando’s technical mastery and imaginative daring, the reviewer concluded by suggesting that the artist’s “gaze extended as far as paradise.”

That is quite a recommendation, especially coming from a newspaper many consider to be allergic to religion. A few days ago I was finally able to see the exhibit for myself. The Times reviewer was right about the initial impression made by the Transfiguration piece. It hangs in the courtyard of the Lehman Wing at the back of the museum, illuminated by a good deal of natural light from above. As you make your way toward it through the Medieval Sculpture Hall, you can see the painting from a considerable distance, filling up the wide doorway to the Lehman Collection. And what you see are only the brilliant whites, yellows, and reds of the top half of the painting where the transfigured Christ reigns supreme, accompanied by the somewhat obsequious Moses and Elijah. The bottom half of the vast canvas is best seen from below by descending the stairs to what is the basement floor. It is a cacophonous scene, showing the plague of snakes sent by God to punish the Israelites for complaining and doubting his promises. But that’s not all that’s going on. As the Bible tells us, God seemed to regret this unseemly show of petulance and instructed Moses, here outfitted in some flashy armor, to erect a bronze sculpture of a fiery serpent. Moses urged his fellow Jews to look at the sculpture, which would save them from the poisonous snakes. (Remember, God’s contradictory ways are not our contradictory ways.) A scriptural passage in Latin, carried by an angel in Villalpando’s painting, proclaims that the bronze serpent is a prefiguration of Christ. Thus these two seemingly disparate biblical events are joined together by the painter’s alleged genius, evidently with some exegetical instruction from the learned bishop who commissioned the altarpiece. 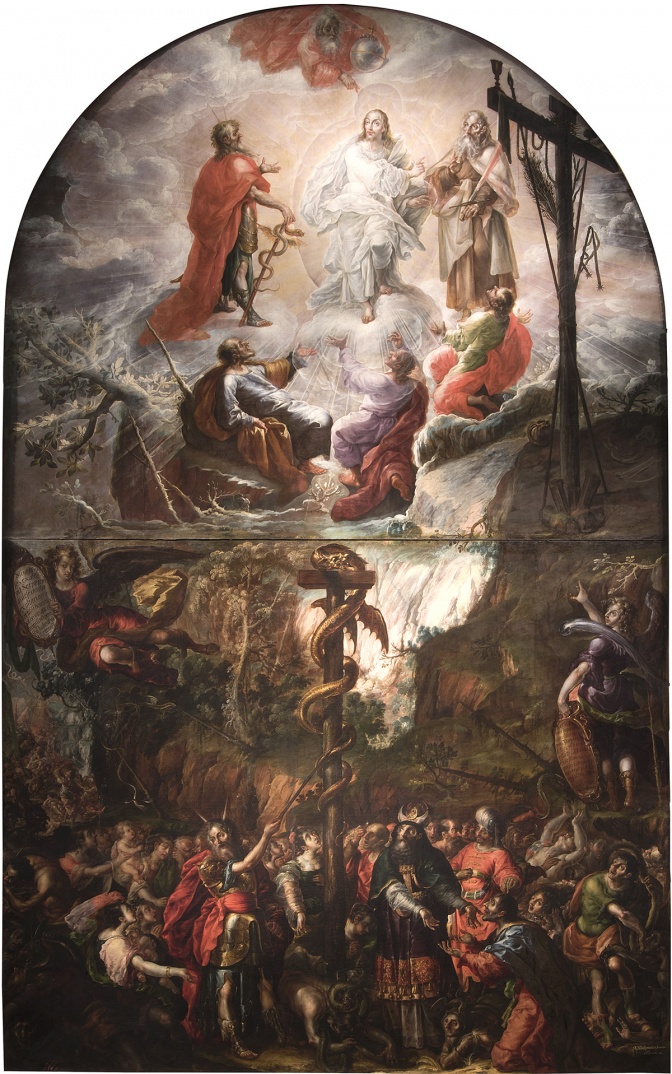 Needless to say, there is a lot going on, narratively and allegorically, in this painting, and in the handful of smaller Villalpando works on view in a nearby gallery. The Adoration of the Magi, also done in 1683, uses a similar palette, and the characters depicted share many of the same features as those in the altarpiece. Everyone seems to have heavy and arched eyebrows. Ears, noses, and lips are also fairly uniform. Villalpando is not known for being much of a draftsman. The Times noted the artist’s penchant for depicting “demonstrative poses and resplendent robes,” and for “doubl[ing] down on Baroque theatricality.” You can say that again. Villalpando seems especially fond of cherubs. In The Immaculate Conception, the Blessed Virgin Mary is rocketing heavenward surrounded by a veritable nursery of winged infants. I don’t claim to know a lot about Baroque art, let alone the Baroque of “New Spain” during the height of the Spanish Empire, but I was struck by the martial tone of Villalpando’s biblical scenes. We are in a different world, with a different cosmology and eschatology, and very different ideas about how violence can be used to spread or defend the Gospel. It is hardly surprising that Villalpando was also the painter of The Militant Church and The Triumphant Church.

It was only after seeing the exhibit that I read the poet James Fenton’s review in the New York Review of Books. Fenton is quite skeptical of claims for Villalpando’s conceptual daring and skills. He challenges the exhibition catalog’s suggestion that Villalpando is in the same league as Rubens and other European masters. “There is no comparison,” Fenton writes, “between the skills of Murillo or Zurburan and the crude but fascinating notations of Villalpando—those bulging eyeballs, those repetitive noses, those fiery serpents.”

Opinions, as they say, differ. Fenton, who in passing expresses his revulsion over God’s role in dispatching the Canaanites, seems equally skeptical of the role Villalpando’s Transfiguration played in Lenten penitential practices in seventeenth-century Catholic Mexico. (If only there were similar penitential practices for those responsible for the invasion of Iraq or Trump’s presidency.) In the seventeenth century, the painting was hung in one of the cathedral chapels used by the bishop to hear confessions during Lent. It loomed over a statue of the scourging of Jesus “at the column,” a piece whose veneration allegedly brought about miraculous cures. One can only imagine the effect of Villalpando’s extravagant rendering of God’s mercurial wrath on those seeking forgiveness for their sins. The “correlation between suffering and conversion” was one of the bishop’s staple themes, according to the exhibition catalog, one to which Villalpando gave vivid, if perhaps histrionic, expression in his colossal painting. 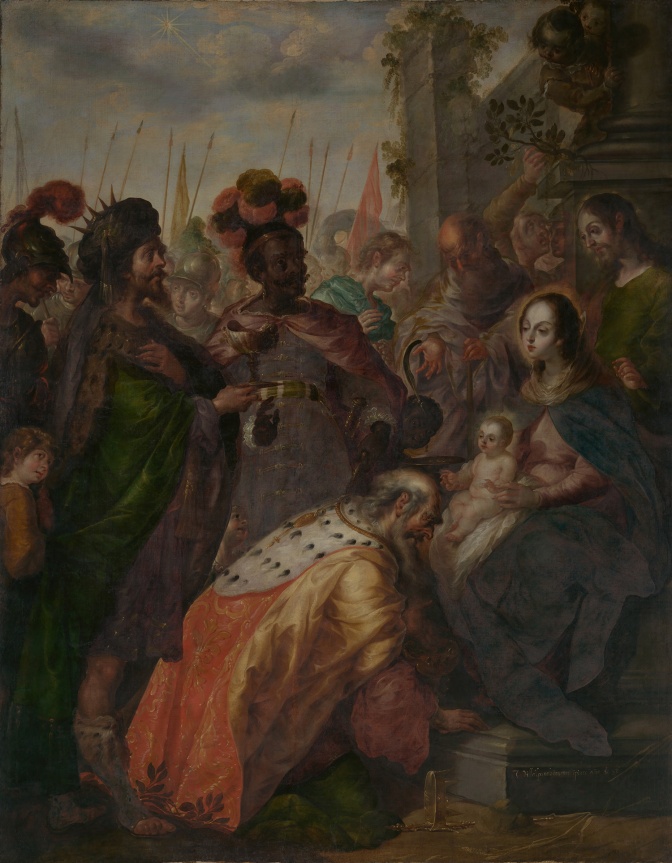 The Adoration of the Magi, Cristóbal de Villalpando

A gallery promenade encircling the Lehman courtyard features some of the Lehman Collection’s nineteenth- and twentieth-century paintings. One steps away from Villalpando’s unruly seventeenth-century Spanish Catholicism and is confronted by the seemingly unheroic and irreligious preoccupations of Renoir, Matisse, Seurat, Gauguin, Cézanne, and others. A different world indeed. These “Impressionists” had abandoned narrative and history painting, and often with it any Christian conviction. We are told that in some important sense, they were more concerned with the act of seeing and the act of painting, than with what they depicted on canvas. The larger Christian narrative of sin, punishment, and redemption is conspicuously absent. In its place is a focus, if not an obsession, with everyday life and things, with the properties of light, and with nature. Is anything redder or more transcendent than a Cézanne apple? (Well, maybe Titian’s Assumption!)

Cézanne has long been a favorite of mine. His Trees and Houses near the Jas de Bouffan hangs just a few feet from the entrance to the gallery featuring Villalpando’s smaller canvases. It’s an early spring scene, or perhaps a winter one. In either case, the trees are stripped bare. The house is off in the distance on a gentle rise. Browns, yellows, and greens predominate. The sky is a wash of blue above and beyond the dark trunks and branches of the trees. The composition conveys a palpable sense of repose. It is circumspect. “You don’t paint souls,” Cézanne insisted. “You paint bodies; and when the bodies are well painted, dammit, the soul—if they have one—shines through all over the place.”

For better and worse, Cézanne’s gaze did not extend to Paradise. But for those looking for it, grace abounds in his paintings.