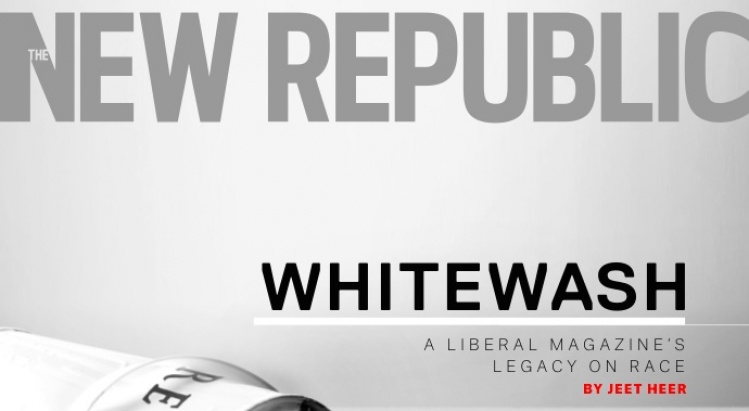 It's still hard to know where the project will end up, or how much of the old New Republic will live on in it, but it must be said that the new New Republic has been having a very good week.

First there's the excellent cover story, by Jeet Heer, in the magazine's new issue -- its first since the December 2014 conflagration that was much discussed here and elsewhere.

The initial cries of outrage over owner Chris Hughes's determination to make the storied journal over into a "vertically integrated digital media company," which took the form of mournful (and well-deserved) encomia for the best of TNR's long history and the best work of its recently departed big names, were followed by more ambivalent reactions to the apparent death of the old TNR that focused on that magazine's spotty history of opining on matters of race and foreign policy as well as its occasional dramatic journalistic lapses (Stephen Glass, Betsy McCaughey...).

Now, the magazine relaunches, so to speak, with a cover story examining "The New Republic's Legacy on Race." It's a canny bit of public-relations positioning, to be sure; it lends some after-the-fact integrity to Hughes's decision to remake the magazine root and branch (if you're willing to assume the decimation of his staff was part of the plan all along). But it's also a very good article in its own right. Heer, a historian, does not simply recall the lowlights of the Peretz era or rehash the controversy over then-editor Andrew Sullivan's decision to publish an excerpt from Charles Murray's The Bell Curve. He goes back to the magazine's founding, in 1914, to trace its successes as well as its failures over the last century. "At its best moments," he writes, "the magazine has been a beacon of fact-based reporting and a forum for rich debate over racial issues. At its worst, the magazine has fallen under the sway of racial theorizing and crackpot racial lore."

Heer's thorough search of the magazine's archives reveals much on the positive side of the ledger: "One could argue," he concludes, "that between the late ’30s and the mid-’70s, The New Republic was one of the best magazines outside the black press in its coverage of the rise of the civil rights movement." Heer details the evidence for that argument and offers a perceptive account of the reasons for TNR's well-known blunders (aside from the peculiarities of owner and "editor-in-chief" Martin Peretz, which are a force of their own).

For at least the first six years of its existence, under founding editors Herbert Croly, Walter Weyl, and Walter Lippmann, The New Republic adopted [Booker T.] Washington’s outlook on race as its own. One problem with Washington’s approach, especially as filtered through the magazine’s privileged white writers, was that it framed justice for black America in terms of what was good for white America.

It was, as others including Ta-Nehisi Coates have pointed out, a problem of limited perspective -- the New Republic saw African Americans as something to be discussed, their rights and experience debated and examined from a distance, instead of as prospective partners in that discussion. So, even when, in its early decades, the magazine was embracing the cause of full civil rights for black Americans, "the magazine’s writers seemed to be going out of their way to assure readers that while they took up the cause of political parity between the races, they weren’t so naïve to accept blacks as social equals." Later, Heer writes, "Perhaps the core problem with Peretz’s New Republic was that the imaginary readers were unquestionably white."

Among the reasons Heer offers for the magazine's public act of self-examination -- i.e., his article -- is this: "A magazine that is loyal to the traditions of liberalism has to account for its occasional betrayal of liberal ideals." Under Marty Peretz those betrayals were more than occasional, and they are still a sore point for people like Andrew Sullivan, or Jonathan Chait, or Michael Kinsley, who worked at TNR during Peretz's tenure. Jeer is very fairminded about that tension in his article:

“I have a problem with some of the needlessly vicious things about Arabs that we publish,” said Michael Kinsley in an interview during his tenure as editor.

He does not point out that Kinsley himself would surely be tempted to respond, "Only some of them?" But he has gone into the subject on Twitter (where he is known for his long, thoughtful "essays" on topics related to journalism and history), answering charges of cynicism: "It's sad that reckoning had to come as result of the fallout of the staff turmoil, but a reckoning on race as at TNR was long overdue..." and then, "If we want to talk about cynicism, why not ask Michael Kinsley about the devil's bargain he made with Peretz?"

In Heer's accounting, famous lapses like "Ruth Shalit's inaccuracies, Stephen Glass's fabrications and the editors' penchant for melodramas of black pathology" (as one photo caption puts it) can be explained at least in part by the magazine's broader "myopia on racial issues." He concludes on a hopeful note:

The magazine has to avoid the temptation to be an insular insider journal for the elite and recognize that its finest moments are when analytical intelligence is joined with grassroots reporting. The magazine’s well-stocked and complex legacy shouldn’t be jettisoned, but it can be reformed, built on, and made new.

One more reason to be hopeful about the new New Republic is an article by Rebecca Traister published today, "Labor Pains," about working women and motherhood and the complicated way the two intersect. I may have more to say about it in the future, but for now I will just say it's the kind of thing I'll hope to see more of in Hughes's TNR (or anywhere else). And it, too, is a canny piece of PR, because Traister -- one of the staffers who did not leave in December, in part, she says, because she was pregnant -- reveals that, under the new regime, she and any other new parent, mother or father, receives sixteen weeks of paid leave. "Does my gratitude make me complicit in the decline of an American institution, or does it make me a lucky beneficiary of that institution’s progressive evolution?" She asks. "I don’t know the answers to any of these questions. And, in the end, I’m not sure I can afford to care. I’m a woman who’s just had a baby."