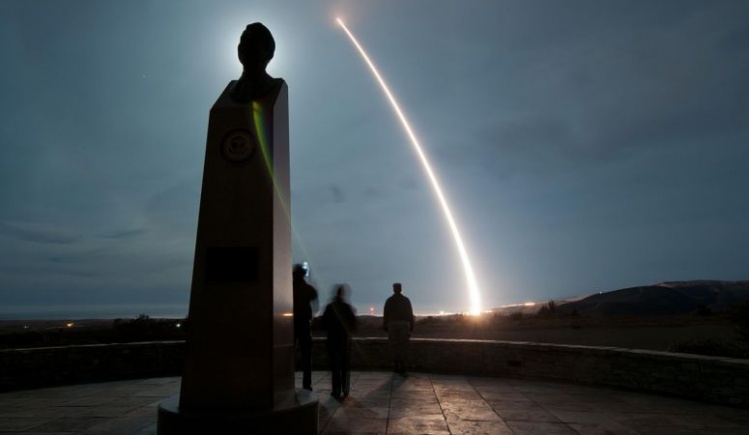 Do nuclear weapons help keep us safe? Or do they threaten our very existence? Rhetorically, American presidents endorse the latter proposition, routinely expressing their commitment to nuclear abolition. In practice, however, they opt for the former, investing large sums of money to maintain and refurbish the nation’s nuclear arsenal.

This gap between aspiration and actual practice has become so well-established as to elude serious notice. In American politics, nukes have long since come to occupy white-lie territory where no one really expects words and actions to align. It’s like promises to simplify the tax code or streamline government. In such matters, officials say things that all parties know to be untrue, even as if by informal agreement they and we sustain the pretense of believing otherwise.

Consistent with this tradition, President Barack Obama, early in his first term, announced “clearly and with conviction” his intention to pursue “a world without nuclear weapons.” Now late in his second term, he has unveiled plans that point in quite a different direction.

With remarkably little fanfare, the administration is embarking upon an ambitious, long-term program aimed at enhancing U.S. nuclear striking power. Upon its completion, roughly expected to coincide with the hundredth anniversary of Hiroshima, U.S. forces will possess a vastly improved suite of nuclear ordnance and delivery systems. New, stealthier, missile-firing submarines; new land-based ballistic and air-launched cruise missiles; new long-range bombers; and steerable, “dial-a-yield” bombs will endow the United States with nuclear capabilities of unprecedented precision and flexibility. The new nukes will stand in relation to those they replace as a smart phone stands in relation to an old IBM mainframe computer.

Such wonders will not come cheaply, of course. The projected price tag of this makeover, marketed under the anodyne label of “nuclear modernization,” is somewhere in the vicinity of $1 trillion. Only rarely, of course, do actual costs of Pentagon programs conform to such initial estimates. With overruns all but inevitable, the final bill will be considerably higher.

The argument in favor of modernization goes like this: (a) deterring others from nuking us requires that we be able to retaliate in kind, with would-be adversaries having no shred of doubt that the United States can and will do just that; (b) reliance on crude weapons designed decades ago to blow up whole cities could raise doubts about whether the United States can or will follow through on such threats; hence, the imperative of (c), fielding advanced systems that are more reliable, more accurate, and less indiscriminately destructive. In sum, rendering hitherto useless weapons more usable holds the key to ensuring their continued non-use.

According to this logic, inaction or even delay invites Armageddon. As one proponent of modernization warns, “A crippled U.S. nuclear force would embolden enemies, frighten allies, generate international instability, and undermine U.S. national security. In other words, it would risk ruining the world that currently exists.” Whereas “crippled,” i.e., aging, weapons pose dangers, new weapons bolster credibility, the coin of the realm in nuclear strategy. Besides, as Defense Secretary Ashton Carter once reassuringly put it, nuclear weapons “don’t actually cost that much.”

The argument against nuclear modernization runs like this: (a) suspicions by would-be adversaries that the United States—known to engage in preventive war—might actually be seeking a first-strike capability will undermine rather than reinforce deterrence; that prospect, along with (b) the difficulty of actually discerning whether the U.S. nuclear arsenal has averted Armageddon, increased its likelihood, or been more or less beside the point, suggests that (c) there might be better ways to spend a trillion bucks. As one critic puts it, no matter how precise or sophisticated, nuclear weapons will remain “useless against the military challenges we face today.” As such, replacing the existing arsenal with a new-and-improved version qualifies as “reckless, wasteful, and downright dangerous.”

Where credibility comes into play is in bringing others around to accepting U.S. nuclear intentions as benign. Were the United States a stay-at-home, minding-our-own-business kind of country, arguing that the world’s most capable nuclear power seeks even greater capabilities simply to ensure that such weapons will never (again) be employed in anger might possess a certain plausibility. Given the manifest U.S. penchant for clobbering those it fears or dislikes, however, persuading others that imparting utility to hitherto useless weapons signifies a deep-seated desire to avert their employment becomes a tall order.

In any event, it will fall to our next commander-in-chief to affirm, modify, or deep-six the course that President Obama has set. Given the money involved and given the sharp disagreements among national security experts regarding the program’s wisdom or necessity, one might think this an issue worthy of discussion by candidates keen to demonstrate their presidential bona fides.

A trillion-dollar plan to reverse climate change, colonize Mars, or build a transcontinental high-speed rail network would no doubt provoke a lively back-and-forth among the various presidential contenders. A trillion dollars for nukes? Not so much.

In fact, the issue has attracted less attention than ethanol subsidies and generates less heat than arguments about elementary school curricula. Only infrequently have candidates touched on nuclear matters and even then their comments have tended to be perfunctory or banal—staking out the sort of position that is easily revised should it become expedient to do so.

Buttonholed after an Iowa campaign event by a peace activist wanting to know where she stands on the issue, for example, Hillary Clinton replied, “I’m going to look into that,” before adding enigmatically, “It doesn’t make sense to me.” Yet her campaign website is silent on the matter.

How does it happen that we have a trillion dollars available to expand our nuclear arsenal, but we don’t have the money to take care of the children in this country?  …. Does Congress listen to the military-industrial complex who has never seen a war that they didn’t like? Or do we listen to the people of this country who are hurting?

Yet when the candidate’s diatribe had ended, the question he had been asked remained unanswered. Yes, Sanders clearly favors children over the military-industrial complex. But his position on whether or not to update the nation’s nuclear arsenal remains anyone’s guess.

As for Republicans in the race, Obama’s high-ticket plan to upgrade the U.S. nuclear arsenal puts them in a bit of a bind. With virtual unanimity, GOP candidates routinely denounce Obama for being pathetically weak on national security and for denuding the country’s defenses. Contrary evidence they ignore while touting their own superior credentials for “keeping America safe.” Yet on that score, Republican candidates are less interested in parsing the finer points of deterrence theory than in signaling their eagerness to kill bad guys.

Here, unquestionably, Ted Cruz leads the pack. Famously pledging to “carpet bomb [ISIS] into oblivion,” the Texas senator thereby offered a fair imitation of Barry Goldwater or General Curtis LeMay, who orchestrated the fire-bombing of Japanese cities. He then hinted that nuclear weapons might have a place in that fight. “I don't know if sand can glow in the dark,” Cruz allowed, “but we’re going to find out."

At least we know where Cruz stands. Not so Donald Trump. By muffing a straightforward debate question about his nuclear priorities, the Republican frontrunner revealed that he has yet to give the matter much thought. A hasty retreat into narcissistic blather ensued: “I think, for me, nuclear is just the power, the devastation is very important to me."

Senator Marco Rubio has thought about nuclear weapons. On his campaign website, he vows to “modernize the nuclear arsenal and stop the Obama administration’s proposed cuts to the nuclear arsenal,” essentially signing on to the president’s plan while simultaneously denying its existence. Indeed, Rubio has charged that “We are the only nation that is not modernizing its nuclear weapons,” suggesting a command of the facts no better than Trump’s.

Jeb Bush’s position is indistinguishable from that of his fellow Floridian, albeit without the flamboyance and with even fewer specifics. Like Rubio, Bush favors modernization as self-evidently good. Like Rubio, he faults Obama for having “weakened U.S. strategic nuclear forces.” Rather than telling us whether Obama’s trillion-dollar program to address those putative weaknesses is too much, too little, or just about right, Bush opts for pretending that no such program exists.

As for Chris Christie, while agreeing that U.S. nuclear forces need updating, he goes way out on a limb to suggest that “one trillion dollars sounds a bit high”—albeit without suggesting an alternative figure.

On the surface, the views offered by the various candidates vary. Yet taken as a whole, what they suggest above all is an absence of meaningful engagement with the subject. In the presidential election of 2016, the future direction of U.S. nuclear policy figures as an afterthought or at best as an opportunity for posturing. Here, if we needed it, is further evidence of just how debased and devoid of substance American politics have become.

My own expectation is that Obama’s nuclear weapons recapitalization program will stand alongside health-care reform and the diplomatic opening with Iran as a legacy-defining initiative. Decades from now, beyond the decades required for its implementation, its effects will persist. Whether those effects will ultimately promote the security and well-being of the United States (not to mention the rest of the planet) remains to be seen.

At this juncture all we can say is this: Nuclear modernization signals the final abandonment of nuclear disarmament as even a nominal goal of U.S. policy. That this should have occurred in the midst of a contested presidential campaign with hardly a whisper of discussion qualifies as astonishing.