Calls for world peace no longer interest us. They should.
By Susan Bigelow Reynolds
War and Peace
Ukraine
Russia
Vatican 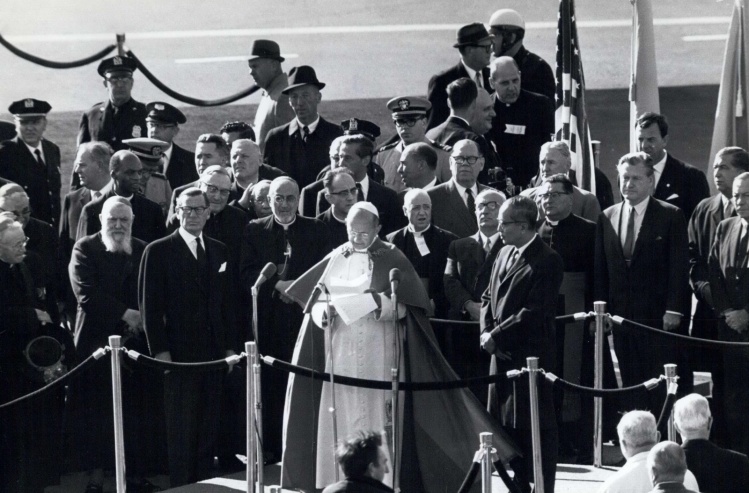 On the Feast of St. Francis of Assisi in 1965, in the middle of a historic visit to New York City, Pope Paul VI ascended the rostrum before the United Nations General Assembly and summoned the world to peace. The visit came two and a half years after John XXIII’s Pacem in terris refashioned the Catholic social and ethical lexicon, and two decades, almost to the day, after the 1945 establishment of the UN itself. The pope ended his address by invoking the refrain of mourning and determination that became a global mantra after the Holocaust and served as the UN’s raison d’être: “Never again.” Speaking, he declared, on behalf of both living and dead—the victims and survivors of war, the poor and disinherited, the youth who dream of a better world—the pope issued a solemn call for an end to armed conflict:

Never again the one against the other! Never again! Nevermore!… It suffices to remember that the blood of millions, that numberless and unheard-of sufferings, useless slaughter and frightful ruin, are the sanction of the pact which unites you, with an oath that must change the future history of the world: No more war, never again war! Peace, it is peace which must guide the destinies of peoples and of all mankind!

The speech’s tone was humble and determined, permeated by faith in the possibility of international goodwill and human progress. It bore the same sense of open-palmed, non-defensive solidarity with the world that, two months later, would suffuse Gaudium et spes, Vatican II’s Pastoral Constitution on the Church in the Modern World. Before the UN, Paul previewed a phrase he would later include in Populorum progressio, calling the Church an “expert on humanity” ready to offer its humane, integral vision of peace and dignity to a world laboring to make itself new.

Soon after the 1965 visit, Time-Life Books produced a special edition commemorating the whirlwind, daylong papal trip to New York. Among other things, the volume included an English-language transcript of the UN address, which appeared alongside Life magazine photos documenting armed conflicts unfolding around the world. Opposite the final page of text, a full-page, black-and-white image shows U.S. Marines trudging past a North Vietnamese man lying on his back, dead in the sand. His half-closed eyes gaze outward, his fingertips graze his abdomen; he wears shorts and a button-down shirt; he is barefoot.

The commemorative publication heralded Paul VI’s visit to the UN as a “call to conscience.” The juxtaposition of his elegant plea for world peace with images of intractable war was meant to evoke the urgency of this call. Seen through the eyes of history, however, it also suggests a tragic irony. At the top of the page, an italicized pull-quote declares, “The hour has come for a halt.” The Vietnam War would rage for another decade. In the end, it gave way not to peace but to desolation and generations of haunted dreams.

The summer after the pope came to the UN, British-American poet Denise Levertov completed “Life at War,” which she composed in response to the Vietnam War. The poem laments war’s numbing effect, the banality with which we—she writes in the first-person plural—have trained ourselves to regard images of death and dismemberment and innocent suffering, our resistance to the horror-response they ought to evoke in us, our willingness to mollify our consciences by entertaining the supposed necessity of the whole thing. “The disasters numb within us / caught in the chest, rolling / in the brain like pebbles,” the poem begins. One can only imagine what Levertov, who died in 1997, would think of the modern newsfeed—or, more accurately, of the doomscroll reflex with which we imbibe images of war today.

War reaches into the future to destroy a world not yet born.
sharetweet

Three stanzas in, she writes, “the same war / continues.” Every war is the same war, Levertov seems to suggest. Interpreted primarily as a commentary on Americans’ willingness to depersonalize overseas conflict, there’s a temptation to read in these lines a cynical desperation: it’s just one far-away horror after another. But Levertov’s work rejects cynicism in the same way that Paul VI’s UN plea for peace requires a level of earnestness that today feels inconceivable. I take Levertov to mean something different: every war is made, ultimately, from the same stuff. The monsters of war shapeshift here and there, like a rash that appears on the face, then the hands, then years later on the back—not three different rashes, as you had thought, but the same rash, fruit of the same subdermal virus, breaking out all over, receding from view but never gone.

It is wrenching to revisit Paul VI’s UN address today, as Russian missiles rip through Ukrainian neighborhoods, flattening schools and theaters and maternity wards. Thousands are dying and millions are fleeing their homes in a war of aggression that feels catastrophically tailor-made to set off a domino effect of global conflict and, impossibly, to dredge up the same nuclear anxieties behind the nearly six-decade-old papal address. For Paul VI, and seemingly for Levertov, there is nothing that can be said of one war that cannot be said of every war. In this sense, Russia’s bombing of a Mariupol maternity hospital on March 9 serves as an apt, nauseating metaphor for war itself. War reaches into the future to destroy a world not yet born. The only hope for humanity is peace.

But, however prescient as they were, Paul’s words also feel like a space-age vestige of some past future, an artifact that belongs in the same aesthetic category as Disneyland’s Tomorrowland and Corita Kent lithographs and the UN headquarters. 1965 was hardly a simpler time: when, midway through the address, Paul refers to “those terrible weapons that modern science has given you”—weapons that “produce nightmares” even before they “produce victims and ruins”—he is calling to mind the acute possibility of global nuclear annihilation. Yet I am struck by how thoroughly we—Levertov’s we—have lost the taste for world peace. We know too much and too little. Indeed, throughout decades of U.S. military involvement in the Middle East, Americans heard remarkably little about peace, even aspirationally. In a post-9/11 world, the other side of war was not peace but merely less-visible war, war that was drone-operated and remote and ignorable, where the sort of conscience-stirring images to which Levertov alludes are kept far away from the front page.

Russia’s war on Ukraine has rendered such examinations of conscience inescapable. And because this is so, the times demand of us what, in the words of Paul Ricoeur, we might term a second naïveté about peace—a re-embrace of the thing that we once felt too wise and world-weary to allow ourselves to keep wanting. In stirring video addresses to his compatriots and world leaders, Ukrainian President Volodymyr Zelensky seems to be coaxing the world toward precisely that kind of embrace. Of course, his immediate aims are more concrete: come to our assistance; look at the truth of what is happening here. But behind these strategic demands lies a deeper, spiritual plea, one captured in the final lines of Levertov’s poem:

nothing we do has the quickness, the sureness,
the deep intelligence living at peace would have.

The time is right to retrieve world peace from the punchlines of Miss America jokes and restore it, unabashedly, to its rightful place atop the wildest dreams and highest aspirations and most zealous prayers of humankind.