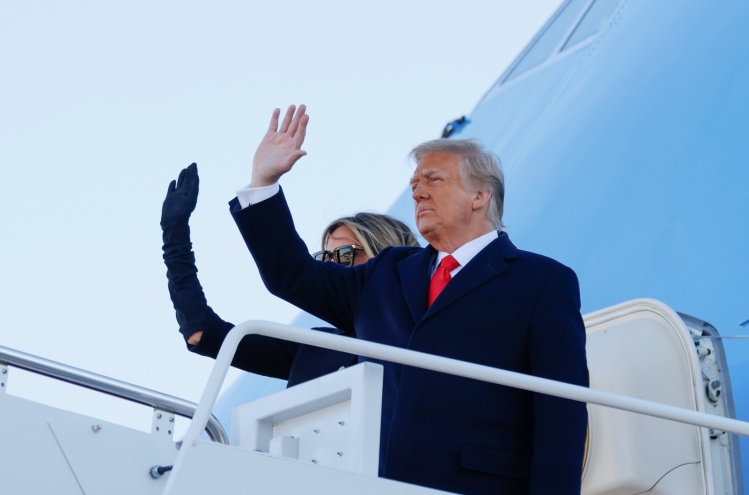 He is finally gone. The Fool departs, the Reign of Error closes. The feeling in our household, as in millions of others, is one of relief. Big, big relief, HUUUUUGE relief, as the man himself might say. On January 20, I kept imagining I could hear a collective sigh of 200 million people—a veritable roar of relief, echoing from coast to coast.

The day had stray notes of absurdity mixed in. Like Trump exiting, in the ceremony of adulation he had choreographed for himself, to the raucous strains of “Y.M.C.A.” (“Young man, there’s no need to feel down / I said, young man, pick yourself off the ground”). Or his valedictory message to cheering supporters: “Have a good life.” Have a good life? Normally that would seem a truculent and sarcastic thing to say. And maybe it was—Trump’s contempt for everyone, even for his supporters, leaking through holes torn in the man by his own ever-thrusting self-pity.

The wear and tear on our country, meanwhile, has been almost beyond measure. It’s not easy to know what the worst of it has been. But I’d begin with the way in which our civic discourse has been degraded. We humans have a fantastic capacity for adjusting ourselves to circumstances. The upside of this ability is endurance: our ability to survive, no matter what. We have seen this on display, spectacularly, during the ten months of this pandemic. The downside is what you might call accustomization. We get used to things; the expression “the new normal” suggests how readily this happens.

What Trump demanded we get used to was a level of insult, bullying, nastiness, crassness, insinuation, duplicity, and brazen selfishness that truly boggles the mind. There was—of course—no secret about any of this; the one thing Trump was honest about was how awful he was going to be. This was a man who mocked people with disabilities to their faces; who urged police to go hard on those they arrest; who egged crowds on with chants of “lock her up!”;  who boasted of sexual assault; who turned debates into pure travesty, bragging about his penis size. And all of this was fully evident before we elected him. The four years of his presidency, as far as I can see, did nothing—not one thing—to balance the ledger on the side of decency, kindness, forgiveness, diplomacy, or joy.

“The new normal,” then, is a scary phrase to apply to what happened these past four years. In this sense, the hope for Biden is a hope for the old normal, some old normal, almost any old normal. That could be his nickname: Old Normal. And that would be a good thing. We need to get back.

But how? To my mind, one of the most discouraging features of Trump’s presidency is one of the most abstract: the epistemological hall of mirrors he led us into; the destruction of the very idea of factuality, objectivity, provability, and truth. Trump did not create the epistemological hall of mirrors; it’s been in the works for some time. During the Bush administration, Karl Rove infamously derided a journalist for being part of what Rove called “the reality-based community.” What he meant was that the journalist was clinging to an obsolete idea—namely, that some things are demonstrably true and others demonstrably false, and further that this distinction is and should be the basis of our political understandings, conversations, and ultimately our agreements. Well, Rove said, you can forget about that! Here were his contemptuous words to the journalist: “We’re an empire now, and when we act, we create our own reality. And while you’re studying that reality—judiciously, as you will—we’ll act again, creating other new realities, which you can study too, and that’s how things will sort out.”

I find it fascinating to think that this idea—namely, that the truth claims people make are not valid on their own, but rather exist only as assertions of power—is traceable to postmodern theory, and that a Donald Trump is essentially a fulfillment of Foucault, via the likes of such cynical operatives as Karl Rove. Whatever the intellectual pedigree of this worldview, its effect on our political life and discourse has been calamitous. Even as my household exhales in relief, other millions of American households fester in anger and even despair, believing that their hero has been cheated out of office. It is, in my view, a provably false belief. But...so what? They believe it, and their refusal to accept any other version of reality is fortified by an extensive network of (dis)information sources. And so tens of millions of Americans are going to continue to believe that this election was fraudulent. They will remain an indigestible particle in the political metabolism of the nation.

Trump’s movement was dragging politics into a warped-mirror funhouse.
sharetweet

Back in October 2016, weeks before an election I predicted Hillary Clinton would win with a comfortable margin, I wrote an essay, “American Dolchstoss,” in which I attempted to assess the threat posed by the Trump style of politics. I was wrong about the election, but unfortunately right about the threat. I noted that with its rampant conspiracy-theorizing, its casual trafficking in calumnies and canards, and its stubborn refusal to accept facts, Trump’s movement was dragging politics into a warped-mirror funhouse. It really is amazing, looking back, to see how clear and consistent all of this was, right from the start. Campaigning in Pennsylvania that October, Trump predicted to roaring crowds that he was going to win big. “The only way we don’t win this state is if there’s cheating going on!” he proclaimed.

From the start, Trump’s Weltanschauung—his appeal and his brand—was darkly and frankly conspiratorial. His campaign was openly based on it. President Obama was a foreign-born Muslim out to sacrifice the United States to a global socialist government. Climate change was a hoax perpetrated by traitors pursuing our country’s demise. The Clintons had Vince Foster murdered. And on and on. He spared no one, mowing down his GOP competitors with such slashing falsehoods as the slanderous innuendo that Ted Cruz’s father was a confederate of Lee Harvey Oswald. From the get-go, he groomed his followers to attribute any electoral loss to the machinations of a sinister elite. Confronted with an unending flood of revelations concerning his boorishness with women, Trump dismissed it as a “global conspiracy.” “The whole thing is one big fix,” he said. “It’s one big ugly lie.”

What’s scary, four years later, is the possibility that no political medicine can eliminate such paranoia. Trump’s style was the MRSA of political discourse, and while he may be gone, it remains in our system, a highly resistant superbug that will persist on talk radio and in the conversations of millions of Americans who will continue to claim, and probably to believe, that the election of Biden was fraudulent. And that—of course—is the true big ugly lie. It is our American version of the Dolchstoss, the lie that helped spur German extremism in the 1920s and ’30s. The Dolchstoss view (literally, “dagger thrust,” a cowardly stab in the back) held that Germany’s defeat in World War I had come about not via reverses on the battlefield, but by the machinations of a cabal of corrupt and traitorous politicians who sold the nation out by signing the Treaty of Versailles in 1919. This rumor of conspiracy and betrayal proved to be an ineradicable canard, and was instrumental in Hitler's ascent. Four years ago, I worried that the election of 2016 would become the Dolchstoss of the American Right. Well, I missed by four years. It was the election of 2020. The poison won’t be easy to purge. It will remain as fuel for the next Trumpian figure who comes along.

And who will that be? Sometimes, during the lowest points of Trump’s tenure, I would console myself with the rueful thought that however awful he was, his effectiveness as a would-be strongman was limited by his lack of focus, his vanity, his constant need for adulation, and his ignorance. Things could be much worse, I told myself. But that’s not really a consoling thought. Because the Trump phenomenon isn’t finally about Trump himself, but about us; it is about the underlying realities that made Trump possible. Imagine a different candidate, one with the same demagogic and xenophobic appeal, but lacking Trump’s looniness and fecklessness. Imagine a Trump who could not only stoke deep American resentment but who could also, for instance, make a coherent and compelling speech about foreign policy, and who could follow up his inflammatory rhetoric with a cogent five-point plan. Imagine an American version of a Euro nationalist like Viktor Orbán or Recep Tayyip Erdoğan. Or Vladimir Putin himself. A real strongman, in other words, not a clownish wannabe. In an America beset with racial grievances, ill-articulated class frictions, immigration anxieties, and the prospect of global terror, it is scary to imagine what a charismatic, shrewd, and truly talented right-wing politician might be able to do.

Part of my relief on inauguration day was gratitude that Trump had decided not to attend—that he would not be there to besmirch it with his surly, grimacing petulance. But again, I was wrong. We needed him there. His mere presence would have helped neutralize the poison, by bestowing an imprimatur of de facto acceptance of the election. Withholding that acceptance was the one tool left in his toolkit. He used it.

In his inaugural address, Joe Biden offered an admirable call for unity and an admission of how elusive unity is right now. I wonder if he understands just how elusive. How do we deal with this calamitous point we have been brought to, where no one trusts anyone else’s sources of information; where convenient fictions and blunt slanders are marketed for ready use by all; where the very idea of objective factuality has been attacked by the cynical and spurned by the credulous? After the assault on the Capitol, Mitt Romney made an impassioned and angry plea, pushing back against what he called Trump’s “dangerous gambit” in perpetuating the claim that the election was stolen. What is the best way to deal with voters who are upset? Romney asked. “By telling them the truth!”

When Mitt Romney is impassioned and angry, you know you have arrived at a point of duress and need. And we have. This vandal president is gone. But the assault on truth has been grievous. It won’t be easy to recover.