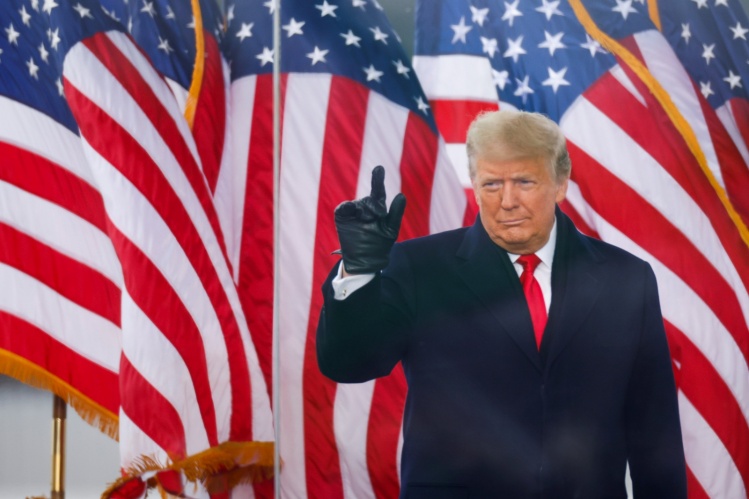 Donald Trump is seen near the White House on January 6, 2021, during a rally to contest the certification of the 2020 presidential election (CNS photo/Jim Bourg, Reuters).

We Americans tend to think of democracy as our national birthright rather than as a fragile achievement that depends on social conditions subject to decay. We spend a lot of time celebrating our pluralism—it deserves celebration—but we sometimes forget that a political community is possible only where people have certain things in common. Without some common beliefs about what is true and what is false, what is real and what is fantasy, the political debates that are the lifeblood of democracy quickly degenerate into mutually unintelligible shouting matches, until words give way to blows.

That is what happened on January 6 in Washington D.C. A mob of Trump supporters, whipped into a fury by the president himself, stormed the U.S. Capitol in order to prevent Congress from certifying Joe Biden’s electoral victory. Their parallel universe of conspiracy theories, echoed and amplified by Trump every day since the election, suddenly broke out of the confines of social media and into the real world, where reckless words can still draw blood. Five people, including a police officer, died as a result of the failed insurrection. The former vice president, who had finally refused to help Trump sabotage the certification, came within minutes of being confronted by rioters chanting “Hang Mike Pence!” Lawmakers hid behind barricaded doors as gangs of QAnon devotees and white supremacists roamed the halls of the Capitol, trashing offices and shouting violent threats.

All this was the predictable consequence of a political environment where even the most basic facts are in dispute, and where unwelcome realties are immediately dismissed by nearly half the country as “fake news.” It would be foolish to imagine this problem will simply disappear now that Trump has left office. Rapid technological and cultural changes are distorting our politics in ways we are only now beginning to reckon with. When the Founders enshrined a free press in the Bill of Rights, it was partly because, as Thomas Jefferson put it, “a well-informed citizenry is the best defense against tyranny.” But today the biggest obstacle to a well-informed citizenry is not government censorship or even Big Tech gatekeeping but the well-documented tendency of social media to insulate willful ignorance and encourage mass delusion. Today misinformation is often much more profitable than real journalism, and much of the American public appears to have little immunity to it.

Today misinformation is often much more profitable than real journalism, and much of the American public appears to have little immunity to it.
sharetweet

But none of this should distract us from the former president’s responsibility for what happened at the Capitol. In its article of impeachment, the House of Representatives correctly described Trump’s actions as the “willful incitement of insurrection.” He knew exactly what he was doing when he sicced his mob on Congress. It was, after all, the logical culmination of what he had already been doing for months: claiming, without evidence, that the election had been stolen from him and goading his supporters to “take back” their country. At the rally before the riot—after incendiary speeches by his son Donald (“We’re coming for you!”) and Rudolph Giuliani (“Let’s have trial by combat!”)—Trump told the crowd that they were going to have to “fight much harder” and “show strength.” Otherwise, he warned, “You will have an illegitimate president...and we can’t let that happen.” The election had been fraudulent, he insisted, and “when you catch somebody in a fraud, you are allowed to go by very different rules.” So they would march to the Capitol and “encourage” Congress to “stop the steal.” “We will not take it anymore,” he vowed. “We fight like hell.”

He, of course, did not fight: he went straight back to the safety of the White House to watch the ensuing riot on television. Trump’s defenders claim he never intended for the mob to become violent, but in that case why didn’t he intervene as soon as he saw what was happening? He could have told his followers to disperse; he could have sent in troops to defend the Capitol (Pence had to do that for him). Instead, Trump said nothing until it was all over. The most reasonable inference is that he was pleased with what he saw. Afterward, he told the rioters that he loved them and understood how they felt.

The Senate now has a duty to convict Trump on the article of impeachment passed by the House. Some have argued that this is pointless since he is no longer president, while others say it should wait until after the Senate has confirmed President Biden’s cabinet appointees and passed another COVID relief package. But nothing could be more urgent than holding Trump accountable for the armed attack on Congress. It was, as the Yale political scientist Bryan Garsten has argued, a brazen attempt by the head of one branch of government to subject another branch “to intimidation and violence in an effort to produce a particular decision by force.” If that is not an impeachable offense, it is hard to imagine what could be. Trump’s last desperate ploy struck at the very root of our constitutional system of self-government. Nor would a conviction be a merely symbolic gesture: it would allow the Senate to bar Trump from ever again holding federal office, including the presidency. In a healthy country that might seem unnecessary. Who could possibly support Trump for any office after all that has happened in the past three months? The sad answer, according to polls: most Republican voters.

Webinar: Charism & Community in an Age of Discernment