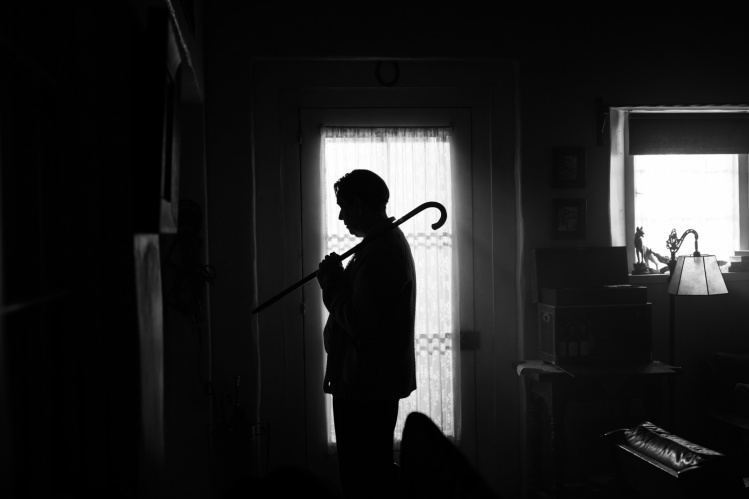 I had read quite a bit of praise for Mank, the new movie about the making of Citizen Kane, before watching it on Netflix. The story is about Herman J. Mankiewicz (played by Gary Oldman), who shared the Oscar for best screenplay with Orson Welles, the star, director, and force behind Citizen Kane (1941). “Mank” was Mankiewicz’s nickname. With its innovative cinematography, ever-shifting chronology, and playful use of newsreels, Citizen Kane is regarded by many as the best—or at least the most important—movie ever made in Hollywood. There had long been a dispute, now largely resolved, about whether it was Welles or Mankiewicz who deserved the bulk of the credit for it. Most scholars now agree that it was Welles who fundamentally shaped the film, although Mankiewicz’s contribution was real enough.

Directed by David Fincher and written by Fincher’s late father, Jack, Mank is shot in inky and shadowy black-and-white, which is intended, I suppose, to evoke the earlier film and the era when Welles and Mankiewicz battled over the script, but it often strained this viewer’s patience and eyesight. Mankiewicz was a notorious wit, a member of the fabled Algonquin Round Table. Jack Fincher does his best to give Oldman the barbed tongue of that classic romantic Hollywood figure: a brilliant writer who has sold his talent and soul to an industry dedicated to the bottom line. But Mank’s wit doesn’t quite come into full view. Or as the New Yorker’s Anthony Lane puts it, “The lines are funny, but not that funny, and it’s never easy to make us believe in someone of lofty comic repute.” In that regard, it doesn’t help that Mank is a dipsomaniac, whose verbal agility is as often derailed as fueled by booze.

Citizen Kane, of course, was a slightly veiled retelling of the life of William Randolph Hearst, the newspaper mogul. It is not a flattering portrait, and Hearst did everything in his power to block distribution of the film. He succeeded, at least at first. Mankiewicz and Hearst were well acquainted, even friends. In the film Mank thinks of himself as a conflicted tribune of the people, although he prefers the company of the wealthy and influential. He is also portrayed as being close to Marion Davies (played by Amanda Seyfried), the movie actress who was Hearst’s mistress. Hearst and Louis B. Mayer, head of MGM and Mankiewicz’s employer, were corporate titans determined to protect their economic interests and sabotage any progressive political movement during the Great Depression. The film proposes that Mankiewicz was embittered by their underhanded opposition to Upton Sinclair’s 1934 campaign for governor of California. (As it turns out, there is no historical basis for thinking Mankiewicz supported Sinclair). A famous muckraking journalist and author of The Jungle (1906), Sinclair had long been a dedicated socialist. Nevertheless, he managed to win the Democratic nomination for governor on a platform to “End Poverty in California” (EPIC), one that included raising taxes on corporations and the wealthy and establishing old-age pensions.

Sinclair had previously run unsuccessfully for governor and other offices in California as a Socialist Party candidate. Perhaps Sinclair’s most famous sentence reads: “It is difficult to get a man to understand something, when his salary depends upon his not understanding it.” Mayer produced “newsreels” denouncing Sinclair with actors pretending to be ordinary citizens. He required employees to “donate” a day’s pay to Sinclair’s Republican opponent. (James Cagney refused.) Hearst’s newspapers similarly distorted Sinclair’s record, calling him a Communist. In short, they practiced the sort of redbaiting that Republicans have long embraced in their effort to roll back the welfare state, practices that culminated in the election of Donald Trump. (If you think that claim is exaggerated, read Jill Lepore’s New Yorker article “The Lie Factory: How Politics Became a Business,” September 17, 2012.)

It is the conceit of “Mank” that the disgruntled screenplay writer penned Citizen Kane to avenge Hearst and Meyer’s cynical and reactionary politics.
sharetweet

Sinclair was defeated handily, and it is the conceit of Mank that the disgruntled screenplay writer penned Citizen Kane to avenge Hearst and Meyer’s cynical and reactionary politics. Sinclair was a prolific author, publishing forty-seven books and winning the 1943 Pulitzer Prize for Dragon’s Teeth, a novel about Nazi Germany. Socialism was not his only cause. Like many of his contemporaries, Sinclair was also interested in spiritualism and various health fads. He used profits from The Jungle to establish the communal utopian experiment Helicon Hall in Englewood, New Jersey—across the Hudson from New York City. Among the commune’s residents was Michael Williams, the founding editor of Commonweal.

Williams, a much-published writer and former city editor of the San Francisco Examiner, had corresponded with Sinclair before the success of The Jungle and wrote to him expressing an interest in the Helicon enterprise. Sinclair invited him to see it for himself. The two became friends, and later put together a book proposal that failed to interest publishers. They subsequently spent time in Bermuda writing a book on nutrition and healthy living (Williams suffered from recurring bouts of tuberculosis). That project also failed, and Williams hints that Sinclair absconded with the advance.

Williams was never a socialist, but he was intrigued by, and sympathetic to, Sinclair’s countercultural social attitudes and his denunciations of economic inequality. In The Book of the High Romance: A Spiritual Autobiography, published in 1918, Williams takes a droll approach to his earlier enthusiasm for Helicon Hall. He describes it as “The House of Strange Souls” and enumerates its various participants and factions as “a mixed assemblage of socialists, ‘intellectual anarchists,’ single taxers, vegetarians, spiritualists, mental scientists, Free Lovers, suffragists, and other varieties of Ism-its.” Writers were thick on the ground, and Williams spent his brief time there toiling away on a variety of manuscripts, including a novel, for which he had high hopes.

Helicon Hall burned down in 1907 under suspicious circumstances, and the group of strange souls disbanded. Williams and his family escaped the fire, but he lost all his writings, including his novel. But he credited the intellectual tumult of “the colony” with helping to sharpen what was to become the philosophical question that would eventually compel him to return to the Catholicism he had abandoned at fourteen. “It was at Helicon Hall,” he writes, “that the problem with which so much of my life has been concerned—the problem, namely, of whether we are immortal souls or merely ephemeral products of a casual chemico-mechanical process, began to press upon me with an irresistible urgency.”

Pursuing an answer to that problem led Williams to organize the effort to establish a journal of opinion that would tackle the cultural and political questions of the day from a distinctively Catholic perspective. From its founding in 1924, Commonweal has not shied away from engaging the arguments of those who—like so many of Williams’s fellow residents of Helicon Hall—think the heritage and intellectual resources of Christianity are irrelevant in a post-Darwinian and technological age. Now, nearly a hundred years after its founding, and in light of the often-unimpeded march of a utilitarian materialism into every corner of human life, Commonweal increasingly seems like a utopian project of its own, but happily one built on a sturdier foundation than Helicon Hall.