The Mother of the Man 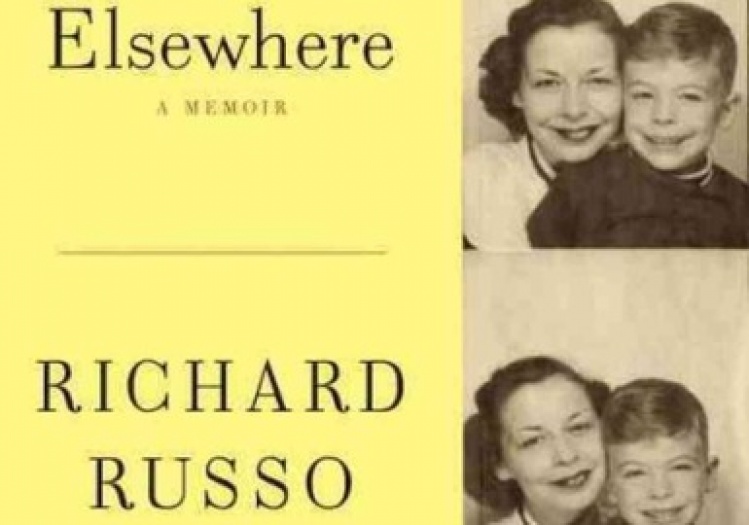 Wayne Sheridan: Your selections of what to include in your memoir Elsewhere seem to me to be truly honest selections. Your relationship with your mother, for example, which was very complicated, yet very warm. Readers will have to actually read the book to find out how very complicated.

WS: Your mother was, in many ways, quite a heroine and ahead of her times. She wanted to escape from Gloversville, New York, your birthplace and childhood home.

RR: And especially, she wanted me to escape.

WS: In addition to Gloversville, Martha’s Vineyard also plays a prominent role in your memoir and also in many of your novels. I recall in Empire Falls (2002) that it’s a central place and a sort of metaphor.

RR: It is a metaphor. It’s the place, where, you know, for working-class people, a place that maybe you can visit for a week, but it’s beyond your reach. The only reason I didn’t use it in That Old Cape Magic [2010] was that I had used it so often. I used it in Empire Falls, and Elsewhere and in a couple of short stories. And it’s been the story of Barbara’s [Russo’s wife] and my life for a very long time.

WS: In the memoir, you write that when you were nine or ten years old your Mom took you to the Vineyard. You also relate how you scattered her ashes in the waters there.

RR: We scattered her ashes in Menemsha. Whenever I go to the island I always go out there. You know, I’m not “religious.” But she loved it. And so I usually go out and kind of walk around that area where we scattered her ashes and sit and maybe read a little bit, just until I become so self-conscious that I can’t stand it. I think, what in the world am I doing? I don’t know why in the world we do such things.

WS: There’s an extended scene in Elsewhere in which you and your mother, against the vehement objections of her father and mother, your grandparents, decide you are going to move to Arizona and that you would go to the University of Arizona. Of course, she is coming with you -- a sort of double escape from Gloversville. You drive there in mid-summer 1967, three thousand miles, with you doing all the driving. You had just turned eighteen, with only three months of local driving experience, and you drove a seven year old, severely underpowered sedan, which your friends dubbed “The Gray Death,” pulling a trailer behind.

RR: Why we didn’t die is still a mystery to me. That trip to across country, really, I can’t imagine anyone doing a dumber thing. And yet, every great thing that I have, the things that are the most dear to me, every single thing in my life I most cherish, I owe to that journey.

WS: Would you have become a writer if you had not made that lunatic journey?

RR: I don’t know. I suspect not. I suspect everything would have been different.

WS: Toward the end of the book, you say you came to the conclusion that your mother most likely suffered from obsessive-compulsive disorder.

RR: There’s no doubt in my mind. And that is another one of the tragedies about my mother’s life, because OCD is treatable. There is really not much discussion anymore about what needs to be done; everyone agrees what the regimen is. It can be unpleasant at times; but the hard thing is making people who suffer OCD to understand what they are dealing with, because obsessive compulsives, almost without exception, are secretive. Whether they are hoarders, or scared to go out, or whatever the constellation the disease has in the individual. One of the things they all have is that they are very secretive; they don’t want anybody to know.

WS: You write that while at the University of Arizona you also had obsessions. A pinball obsession. Then later on an obsession about gambling at the dog tracks. Then, poker.

RR: Of course, in my family, it came at me from two different directions. Because from the female side there was my mother. And my grandmother, we learned after talking with my aunt, had a number of outrageous symptoms which manifested themselves when my aunt and mother were young. I had no idea about these while I was growing up. These dovetailed with the Russo side, especially with my father, who was a compulsive gambler. So in me, it was kind of a perfect storm. Something would just take hold of me. But, of course, writing for me has been the final obsession.

WS: You’re the type of writer then who “cannot not write.”

RR: Yes. Also, as I’ve gotten older, I’ve noticed my process has changed a lot. I’ve always revised. But, now, I spend more and more time turning sentences around and getting things as close to exactly right as I can. And I know this is a good thing for a writer to do. Because writing is revision and it is making things as beautiful and as true as you can possibly make them. So going over the words; making sure that you’ve got the right ones, making sure they are in the right order; all of those obsessions are what make a good writer.

WS: Did you ever consciously use you mother in your work? Or, did you try to avoid doing so?

RR: Well, she appeared glancingly at times, I think in my second novel, The Risk Pool [1988]. I needed the character to go live with his father in that book and in order to make that happen I gave his mother a nervous breakdown. And of course I knew at that time that my mother was suffering. I knew there was some problem as I was growing up. She was the one who told me, “I’m going to end up institutionalized if something doesn’t happen here.” So all those threats she made found their way into this character’s mother.

In the case of my mother, I thought: What would her life have been like if she didn’t have these demons? She was a smart woman, and a brave one. And as I was thinking that through, I suspect that is where Tesa Lynch came from in Bridge of Sighs [2007]. She is married to a real sweet, but not terribly bright man; she is the much sharper knife in the draw, and she is the one who would figure things out. She’d know exactly what to do and also have the courage to do it. My mother I think would have been like that if she hadn’t been hampered as she was. But also at times I imagined my mother with her great energy and her determination, and her great courage, minus the disorder. As a result of that comes some of the strongest women to appear anywhere in my fiction. Tesa Lynch just takes my breath away.

WS: Your mother was worried about you putting your academic career aside to jump into writing full-time. You had achieved professional and some financial success and suddenly you were your dad again, taking a gamble.

RR: Yes, taking a gamble. My mother always walked that knife edge between viewing herself as a rebel and being in her heart of hearts a very, very conservative person. She did not like risks. When I declared at age thirty that I was going to be a writer and that I didn’t think I was going to be a professor much longer, that struck her as the kind of hubris that had been her doom. So, she was not a fan of that decision. Nor was anybody. It did seem like such a damn foolhardy thing to do. And if you read any of those early stories that would have been further evidence.

WS: The title Elsewhere, it seems, has at least two meanings. Could you talk about the title?

RR: Well, it’s always where my mother wanted to be. When she was in Gloversville, she would always say, anywhere is better than this, take me anywhere. But, as soon as she got anywhere, she needed to go home. In all those moves, one move right after another, there was always something wrong with where we were. And, it just seems so cruel to say, what was wrong with where she was, was that she was there.