‘Not One Inch’
By James Sheehan
Russia
History
Foreign Affairs 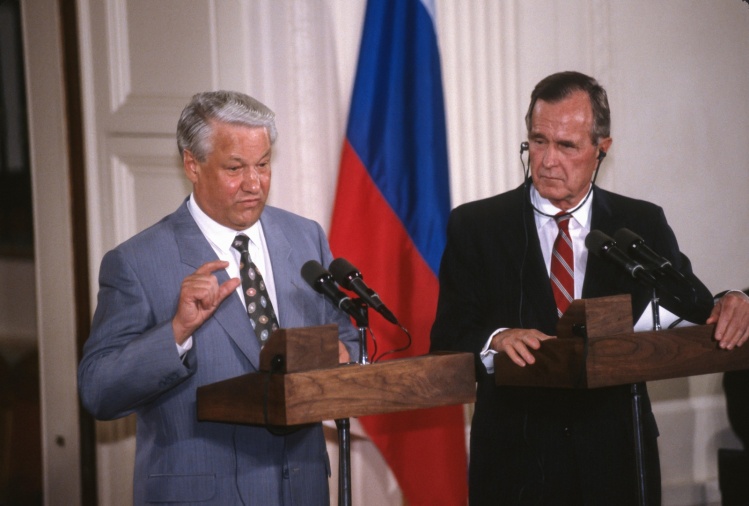 A character in Ernest Hemingway’s The Sun Also Rises describes the two ways in which he went bankrupt: “Gradually, then suddenly.” The same thing can be said about the political bankruptcy of the Soviet Union. In retrospect, we can see the gradual erosion of the regime’s power and legitimacy, but its final collapse was sudden and, to almost everyone, surprising. M. E. Sarotte’s superb new book examines the decade after the great surprise of 1989 when political leaders on both sides of the Atlantic struggled to come to terms with the dangers and opportunities of a new international order.

The first and in many ways most dramatic expression of these dangers and opportunities was the “German question,” which was dramatically reframed by the opening of the Berlin Wall in early November 1989. No one knows this story better than Sarotte, who has written two fine works on the process of German unification. In Not One Inch, she brilliantly captures how an extraordinary interplay of long-term trends and sudden events made unification possible. Once the wall was gone, the increasing flow of migrants from east to west threatened the stability of the Federal Republic and, more importantly, the very existence of the East German state. Until November 9, West Germany’s policy toward the East had emphasized the use of economic pressure to produce gradual changes—this was the essence of the Ostpolitik begun by Willy Brandt in the late 1960s and eventually accepted by the majority of Germans. By the end of November, gradual change was no longer an option. As Chancellor Helmut Kohl told the British Foreign Minister in May 1990, “foreign policy was like mowing grass for hay. You had to gather what you had cut in case of a thunderstorm.” The storm that Kohl feared most was the replacement of Gorbachev’s reformist government in Moscow with a regime less willing to allow the two postwar German states to unify peacefully. After all, in 1990 there were still 338,000 Soviet troops on German soil. Could one really be sure that they would simply pack up and go home?

In Washington, the Bush administration sympathized with Kohl’s desire to use this historic opportunity to end Germany’s postwar division. But American policymakers were worried that Kohl might be willing to accept, as the Soviets insisted, a neutral status that could detach a unified Germany from the Western alliances that had been the anchor of West German foreign policy throughout its existence. Knowing how this turned out, it is easy to overlook the complex combination of diplomatic skill and good luck that made it possible to have a peacefully united Germany, still firmly integrated in NATO and the European Union.

Germany’s future was only one of the difficult questions posed by the disappearance of the Soviet Union and the disintegration of the international system created during the Cold War. The Russian Federation (still in possession of the world’s second-largest nuclear arsenal), the former members of the Warsaw Pact, and the Soviet Union’s successor states (including Ukraine, independent since 1991) had to create a new set of political, economic, and social institutions and, at the same time, redefine their place in the post–Cold War order. In Washington, the Bush and Clinton administrations had to address the security demands of the new Eastern European democracies without threatening Russian interests and undermining Boris Yeltsin’s fragile and increasingly erratic government. In the end, American policymakers failed to find a way to do both. By taking advantage of Yeltsin’s vulnerability and the Russian Federation’s desperate economic situation, they were able to impose a NATO expansion that included most of Eastern Europe. (Ukraine and Georgia were promised NATO membership but without a clear timetable). At the end of 1999, when Yeltsin was replaced by a former KGB operative and local politician named Vladimir Putin, it appeared that the West had succeeded in shaping a new European order in its own interest. The price of this victory is, of course, now becoming apparent.

Not One Inch is a book to which historians will return again and again, as they try to understand why an era that began with such promise ended so badly. Sarotte’s scholarly apparatus, a hefty 177 pages, will provide a treasure trove of material for future researchers. But this is also a book for our historical moment, a work to be read and pondered now, as we live with the gradual and then sudden bankruptcy of the post–Cold War international system. It is no surprise that the first edition has already sold out and that a paperback will be issued soon.

Like all counterfactuals, this assessment of how a different approach to NATO expansion might have affected the international order is inherently speculative.
sharetweet

At the core of the book’s immediate relevance is a counterfactual proposition. Would a more prudent and flexible set of policies, especially on the part of the United States, have avoided alienating Russia and thus encouraged the emergence of a more stable and peaceful order? Sarotte answers yes. In contrast to some of the more flamboyant expressions of this argument, her version is characteristically nuanced and cautious, yet she makes clear that for a variety of reasons both Washington and Moscow failed to take full advantage of the possibilities opened by the end of the Cold War. The key issue here, of course, was the expansion of NATO to include the states created from the wreckage of the Soviet empire. Sarotte suggests that it might have been possible to find a way of satisfying these states’ need for security without threatening Russia’s status as a great power. It seemed for a time that the Partnership for Peace program—which provided a connection to NATO without the guaranteed support stipulated by Article Five of the alliance’s treaty—might have accomplished that. As Sarotte shows, that alternative eventually collapsed under the weight of opposition in Washington, pressure from the Eastern European states, and the increasingly unstable situation in Moscow.

Like all counterfactuals, this assessment of how a different approach to NATO expansion might have affected the international order is inherently speculative. We will never know for sure what might have happened. Moreover, one counterfactual proposition usually suggests other possibilities. For example, what if a more sympathetic attitude toward Russian interests had not produced a less aggressive response in Moscow? In other words, what if a more accommodating approach had whetted rather than dulled Russia’s appetite for empire? Then the states surrounding Ukraine, instead of having the guarantee of a NATO defensive response, would have been protected by the more flexible but also more uncertain provisions of the Partnership for Peace. Would this situation have been less perilous than the one in which Europe now finds itself?

Such questions will surely not go away, but their shape and significance will be determined by when and how the fighting in Ukraine ends—an issue that, as I write these words at the beginning of May 2022, is still very much open.