He answered our call
By Paul Baumann 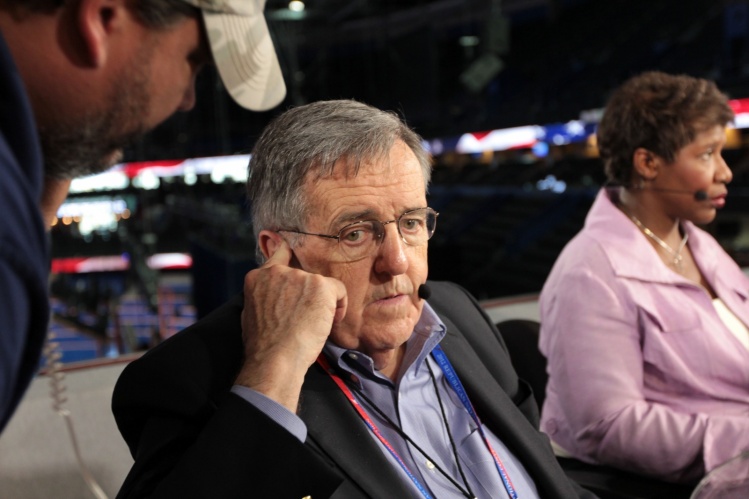 There have been many heartfelt tributes to Mark Shields, including John Carr’s remarks at Shields’s funeral Mass, which Commonweal published a few days ago. For viewers of the PBS NewsHour, where Shields served as a political commentator for thirty-three years, his sagacity and sharp wit were a weekly reminder that politics and public service could indeed be noble callings. He was much admired not only for his intelligence and seemingly encyclopedic knowledge of contemporary politics, but for his unpretentiousness and generosity of spirit. Commonweal was one of the many organizations that greatly benefited from Shields’s willingness to lend a hand.

For many years, Shields provided Commonweal with a laudatory and enthusiastic quotation to be used in our direct-mail campaigns to prospective subscribers. My efforts to find out who initially asked Shields for that endorsement have proved futile. But as print magazines moved into the new digital world, direct-mail efforts became less and less effective. It was apparent that Commonweal needed an additional source of income beyond subscriptions and the indispensable contributions of the Commonweal Associates. Following the example of other nonprofits, we decided to put on a biannual dinner and fundraiser honoring someone with the Catholic in the Public Square Award. We hoped to recognize public figures who brought a recognizable Catholic sensibility and a genuine concern for the common good—otherwise known as the commonweal—to their work.

He quipped he would accept the award as long as it “really isn’t about me.”
sharetweet

We have now been doing these fundraisers for nearly twenty years, but it was crucial to make something of a splash with the inaugural event. Mark Shields, a nationally known television pundit, seemed the perfect candidate. Unfortunately, no one on the staff or the magazine’s board knew him personally or had any connection to him. Obviously, Shields was familiar with Commonweal, but he evidently had never written for the magazine. We decided to say a prayer and cast our bread upon the waters. I wrote to him, and I made sure it was a brief letter. After introducing myself, I outlined the magazine’s needs as well as our admiration for his work. In an appeal to the traditional Catholic virtue of humility—a quality Shields exemplified—I assured him that the award “would not be about you.” Several weeks passed before he responded by phone. I don’t remember much about that phone call beyond my gleeful gratitude on hearing him say yes. I do remember that he quipped he would accept the award as long as it “really isn’t about me.” About six months before the 2005 dinner, I met with him for the first time at the National Press Club in Washington to go over a few minor details about the proceedings. He was, as so many others can testify, a welcoming and witty presence.

The dinner, held at the Essex House on Central Park South in Manhattan, was a great success and a much-needed boast to our bottom line. Thanks to Shields, we sold out the banquet room. In presenting the award, I quoted Shields as follows: “Being involved in politics was considered to be an important civic duty and important occupation where I grew up. It is important for us to remain engaged. Politics is nothing more and nothing less than the peaceable resolution of conflict among legitimate competing interests. In a democracy as big and sprawling and diverse as ours, I don’t know how else we can resolve our conflicts and differences except through the care, the commitment, the intelligence, the passion, and the love of politics. I pray we never do it simply by muscle or numbers; too often it’s being done by money.”

In the following years, I spoke with Shields occasionally. He was a stalwart contributor to the Commonweal Associates. In sending in his check, he would often append a short note remarking on something he particularly appreciated in the magazine. I wrote to him in 2020 after he retired from the NewsHour at the age of eighty-three. I thanked him for everything he had done as a voice of sensible liberalism, but I also thanked him for playing the crucial part in getting the Catholic in the Public Square Award off the ground. In doing so, he set in motion a gathering of the magazine’s friends and supporters that has helped to sustain Commonweal for what will be one hundred years in 2024.