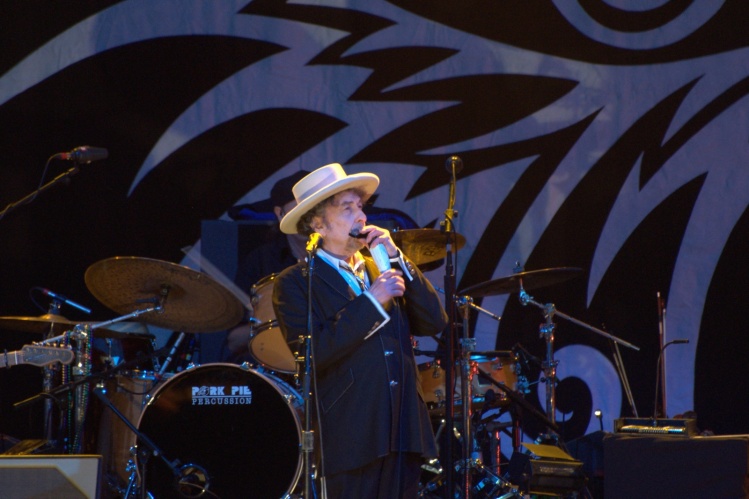 When I stayed with my grandmother as a kid, I’d sometimes come into the kitchen and find her standing by the sink, listening to a tiny radio she kept on the counter. The station she liked played music I’d never heard before, songs I somehow recognized as being even older than the “oldies” my parents listened to in the car. My grandmother was a widow by then, having recently lost my grandfather, who had survived a Nazi prisoner-of-war camp but hadn’t survived cancer. Her radio mostly played music from the forties and fifties, when they were both beginning their adult lives.

The little radio seemed magical to me, like a tiny time machine. Sometimes I would drift into the kitchen, empty between mealtimes, and listen by myself. The music varied in style, but it all belonged to an older America. Even the DJs seemed to be from another era. Years later, I tried to find the station on my own radio, but it didn’t exist anymore. For a while I wondered if it had ever existed at all. But it had, in fact, been a real station (the internet knows everything), and now I know what I heard back then: big-band music, jazz, Western swing, rhythm and blues, early rock’n’roll. Frank Sinatra, Stan Getz, Patsy Cline, Nat King Cole, Etta James.

Bob Dylan refers to all of these artists—and many more—at the end of his new album, Rough and Rowdy Ways. Early reviews hailed the album as one of Dylan’s strongest in decades. “One of His Most Timely Albums Ever,” claims the Rolling Stone headline. But listeners who come to this album looking for music that speaks directly to this difficult moment in our country’s history will be disappointed. This isn’t an album about the present. It’s about the still-living past—history, literature, mythology, religion, and popular culture, all jumbled together. It’s the music from my grandmother’s time machine, transformed into something new through Dylan’s redeeming strangeness.

Rough and Rowdy Ways doesn’t offer any direct commentary on our painful present, but it does offer some perspective on our history.
sharetweet

“Today, and tomorrow, and yesterday too,” Dylan sings, “the flowers are dyin’ like all things do.” These are the first words of the album’s opening track, “I Contain Multitudes.” Before the song’s end, the singer tells us that he sleeps “with life and death in the same bed.” But Rough and Rowdy Ways isn’t about mortality. In fact, the album’s references to death more often seem to be making a joke about the position Dylan finds himself in these days. If you Google his name, the first question in the “People also ask” box is “When and how did Bob Dylan die?” He may have Googled himself: “Can’t remember when I was born,” he sings on the album’s second track, “and I forgot when I died.” But the same song also offers a sly rebuttal: “You don’t know me darlin’/ you never would guess/ I’m nothing like my ghostly appearance would suggest.”

As the title suggests, the tone of Rough and Rowdy Ways isn’t somber. Instead, the septuagenarian Nobel Prize–winner offers us something far more lively: an album full of boasts, threats, jokes, taunts, laments, come-ons, and declarations of love, sometimes all in the same song. One moment he’s singing about praying to the cross and kissing girls; the next he’s singing about cutting someone “with a crooked knife.” As he puts it, “I’m a man of contradictions, I’m a man of many moods.”

The album’s styles match these varying moods, from rowdy blues numbers (“False Prophet,” “Goodbye Jimmy Reed,” “Crossing the Rubicon”) to the tender ballad of a pre-war crooner (the touching “I’ve Made Up My Mind to Give Myself to You”). Drawing on many of the same sources as my grandmother’s favorite station, the songs never drift into stale nostalgia. This is in part because of the album’s rough and rowdy lyrical tone, but even more so because of Dylan’s much-derided voice, which is truly a marvel. His voice at age seventy-nine defies adequate description, varying from a ghoulish growl to a hoarse croon, a mix of Howlin’ Wolf and Jimmy Durante, with traces of all the earlier Bob Dylans underneath.

For some listeners, this voice may be too much to handle. In fact, Rough and Rowdy Ways probably won’t convince those who aren’t already contemporary Dylan fans. But for those who like their music to have rough edges, those who think art should be strange because life is strange, those who think that great singing is about expression rather than perfection, Dylan’s vocals won’t disappoint. The phrasing and emphasis are almost always surprising. He can make a simple statement sound hilarious (“I got up early”) or absolutely heartbreaking (“Just takes me a while to realize things”). You wait for each line wondering what he’s going to say next and how he’ll say it.

His band’s performances and the album’s production—by Dylan himself—help to emphasize, rather than hide, his vocals. He sounds like a weary but energized singer performing in some late-night blues club, supported by a small band of rough and masterful minimalists. This minimalism is most striking on the album’s opening track, “I Contain Multitudes.” Over atmospheric acoustic and electric guitar, with no drums, Dylan offers us a half-serious litany of his contradictions (“I fuss with my hair, and I fight blood feuds,” “I paint landscapes, and I paint nudes”), ending each verse with Whitman’s words as a refrain. He name-checks other literary, musical, and cultural figures, while making more subtle references to a vast range of sources: forgotten rockabilly songs, Irish-language poetry, a collection of Jewish mystical tales, a quote from Shelby Foote’s Civil War: A Narrative. Rather than being tiresome—the musical equivalent of an encyclopedia index, a Finnegans Wake for Dylan fanboys—this method of cultural collage only adds to the song’s mysteries.

The closing track, “Murder Most Foul,” is a slightly different story. Nearly seventeen minutes long, it begins as a retelling of the Kennedy assassination that sounds like something a group of high-school kids would write as a joke for a history-class project (“Twas a dark day in Dallas, November ’63/ A day that will live on in infamy”). You may spend the song’s opening minutes wondering if this is bad on purpose or just bad.

As the song continues, though, it becomes strangely moving, without veering from its pulpy, melodramatic tone. Over striking piano and strings, Dylan talk-sings the story of the assassination as if it’s an old gangster movie. As he sings this tale, he seems to be free associating whatever twentieth-century cultural fragment crosses his mind. Soon he’s making direct requests to a DJ: “Play me a song, Mr. Wolfman Jack/ Play it for me in my long Cadillac/ Play that ‘Only The Good Die Young’/ Take me to the place where Tom Dooley was hung.”

In addition to name-checking Lady Macbeth, Harry Houdini, Buster Keaton, and too many blues and jazz musicians to list, “Murder Most Foul” invokes more than seventy different songs, from the Eagles to a Union Army march. Most of Dylan’s requests, though, would be right at home on my grandmother’s old radio, songs by the artists of the postwar era. He wants to hear “Stella By Starlight” and “Nature Boy” and “Deep in a Dream.” He wants to hear music from that old, faraway America.

Rough and Rowdy Ways doesn’t offer any direct commentary on our painful present, but it does offer some perspective on our history. At this moment, it’s easy to reduce American history to a simple tale of violence and injustice. After all, our long and unending history of violence and injustice is painfully real. But Dylan’s album—and its closing track in particular—remind us that American history is also the story of American popular culture, the story of the artists who expressed their individuality and made something come alive, despite the obstacles they faced. America, too, contains multitudes.