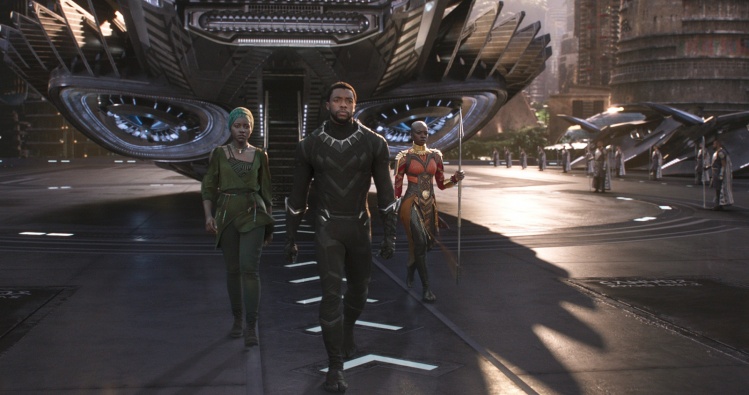 Some movies get discussed more for their significance than for their quality. A reviewer can feel churlish about this—about how implacably cultural or political criticism can convert questions about the work itself into questions about its reception. Are we discussing film X as a phenomenon, or as an experience of cinema? Yet some films really are noteworthy for what they represent, for what their popularity tells us about who and where we are.

By now everyone knows about the booming success of Black Panther, writer-director Ryan Coogler’s action epic featuring the Marvel Comics hero created by Stan Lee and Jack Kirby in 1966—the year the militant black-power group of the same name was founded. Two weeks into its run, Coogler’s movie—a film by a black director, with a nearly all-black cast—had grossed $750 million, and it’s clearly heading for the rarefied company of billion-dollar blockbusters. Of course, African Americans are no newcomers to cultural achievement and fame. But categories matter. A Grammy-winning singer or a slam-dunking NBA star is one thing; a comic-book superhero is another. And a comic-book superhero deployed by a black director to celebrate and exalt Africa is something else again.

That something else lies precisely in the unreality of a superhero—his mythic stature, which both reflects and requires an audience eager not merely to extend sympathy, but to submit. The superhero occupies a special position vis-à-vis the citizenry, one of vision, power, and the responsibility to protect: in a word, superiority. Batman, Superman, and Spider-Man are as Greek demigods among men. They are the ultimate first responders, in whom we put our sacred trust.

Who is eligible for that role? Who gets to dazzle, delight, and defend? For centuries African Americans, in the white imagination (which is to say, the dominant cultural imagination) didn’t qualify, and in fact possessed essentially the opposite role. Black Panther matters in a way so elemental it almost need not be said, which means that it should be said: a segment of our American population, enslaved and terrorized, and subsequently reviled and oppressed, now claims the sleek mantle of the superhero, and his sure command of our collective allegiance.

Commercially and artistically, Panther can be seen as the final liberation of the African American movie from marginal status. Yes, blaxploitation, bromance, and soul-sister movies have thrived, but only as niche phenomena—movies, from the white POV, “for them”—with no shot at blockbuster-level marketing, money, or audiences. Is this liberation something ’60s radicals would have called revolutionary progress? Well, times change, and the system is what it is; what you can’t overthrow, perhaps you can outsell. This is the way success is measured in marketplace America. And if Panther has anything, it is the look and feel of success.

It’s worth noting that there were earlier attempts to make this movie; Wesley Snipes tried in the late 1980s and early ’90s, but failed. One can cite any number of reasons why: computer-graphic imagery was still in its infancy, and comic-book-based movies were nowhere near as popular as they are now. But other explanations are political and racial. Would a mass white audience of thirty years ago been willing to embrace a black action hero?  One obvious event has transpired since then: the election of a black president. Without Obama, perhaps, no Black Panther. Timing is everything, in politics and in Hollywood.

As for Black Panther itself, it’s got everything you could want from an action-hero film. Not least are the terrific performances at every turn. This starts with Chadwick Boseman as T’Challa, ascendant king of the fictional African country of Wakanda, a civilization built upon a mysterious and magical metal called vibranium, where military might is used only to safeguard right. Boseman (he played Jackie Robinson in 42), exudes manly honor, flashy good looks, and a slyly quiet humor. The cast surrounding him includes the always-luminous Lupita Nyong’o as his steadfast companion and spy, Nakia, and Michael B. Jordan, star of both prior Coogler films (the quietly devastating Fruitvale Station and the 2015 addition to the Rocky franchise, Creed), as the evil usurper, Erik Killmonger. Bulked up from his days as the young quarterback Vince Howard in NBC’s Friday Night Lights, Jordan still projects the same powerful earnestness, albeit here turned to bitter recrimination and violence.

Along with the dazzling performances comes a dazzling look, delivered via costumes and sets that mingle the contemporary with the timeless to portray Wakanda as a vibrant center of African civilization. The film gives vivid shape to decades of scholarly attempts, via studies of Timbuktu, Ashanti, and other medieval African societies, to justify the continent’s history on the civilizational playing field set by Europe and Asia. Here then is an enticing counterfactual, a vision of African greatness lying hidden from view; zip through a magic portal in the savanna and you enter the world that would be if African development had taken something like the western course; the Wakanda cityscape presents an African imperial architecture complete with skyscrapers that adapt the aesthetics of ancient Zimbabwe to the modern cityscape.

This is a movie we can enjoy for its gleaming high jinks, even as it opens up a meta-narrative of race, society, and film itself.
sharetweet

It all adds up to a society both technologically advanced and yet steeped in royal ritual—and ruled by a hero-king who’s part Mansa Musa, part Batman, part 007. Coogler plays explicitly with the Bond ironies, building them into his script, including svelte exchanges in a glittery casino; slinky shadow images cavorting to cheesily sexy music as in the Bond intros; and scenes in which T’Challa is equipped with the latest spy gadgetry by his techno-genius assistant (and younger sister), Shuri (Letitia Wright). Bosman even navigates these scenes with a wry, Bond-like grin, as if amused by the reverse cultural appropriation involved in rebranding such tropes. Coogler adds iconic African motifs, filling battle scenes with rampaging rhinos and battalions of fierce women warriors, rounding out his film’s curious amalgam of the ancient and the futuristic.

This is a movie we can enjoy for its gleaming high jinks, even as it opens up a meta-narrative of race, society, and film itself. Blackness is the default reality both of Wakanda and Black Panther, the film. Scenes of crowds milling on the city streets of the capital disclose a populace at once cosmopolitan and yet so overwhelmingly black that the stray white person attracts “what is he doing here?” stares, reversing our own country’s dynamic of otherness. Similarly, the couple of roles given to white actors, like a comic turn by Martin Freeman as a bumbling FBI agent, are so superfluous that we can’t help but recognize them as a reversal of the Hollywood tradition whereby one black actor gets a minor ornamental role—to add color, as it were.

Black Panther, destined to loom large come Oscar time next year, makes an excellent bookend with this year’s Best Picture nominee, Get Out. Both films refract a racial critique through seemingly unlikely genres. Get Out took a prevailing trope from current discourse of race—the black body—and literalized it as the object of predatory whites, encapsulating the peril and outrage of African American history in a B-level horror-flick knockoff that piled layers of irony on the notion of “black humor.” Black Panther pursues a similar justice project in a way that couldn’t be more different, mainstreaming Afrocentrism—and exalting the black body—while appropriating an epic, attention-grabbing, money-making cinematic tradition.

You might not think that such a glossy entertainment could have such serious purposes at heart. But cinema is a supple popular form, and I for one can hardly imagine anything more apposite to our current political moment, with a brutish villain in the (very) White House issuing racist rants about shithole countries, than the jolt of justice supplied so enjoyably by this film and its grand, dazzling, and utterly winning act of reclamation.