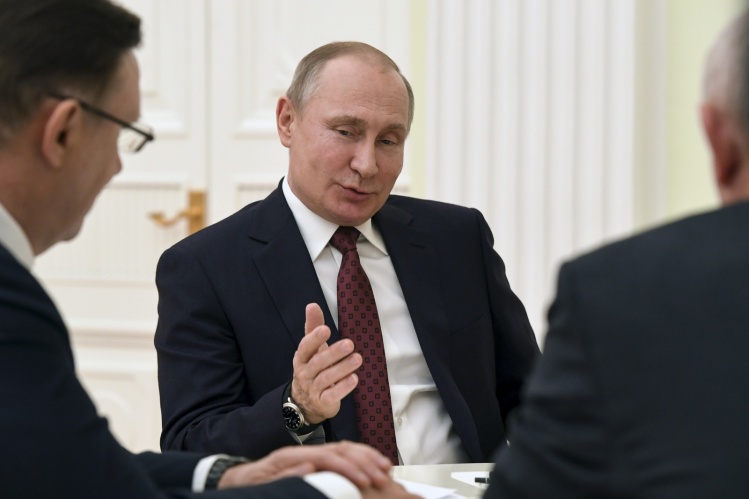 It is mildly surprising that most Republicans, following the shameless sycophancy of President Trump, now profess an admiration for Vladimir Putin, a dictator who assassinates his opponents and has invaded a neighboring country. This is, of course, a dramatic reversal from the fervent and occasionally paranoiac anticommunism that was fundamental to the party’s identity until…well, until the day before yesterday. But it is not shocking. For the past several decades it has been clear that the Republicans consider the Democrats, alleged advocates of military weakness and sexual permissiveness, a graver threat to American democracy than any foreign adversary. Demonizing “liberals” is an article of faith. That’s why even never-Trump Republicans could not bring themselves to vote for Hillary Clinton. “Most Republicans,” New York magazine’s Jonathan Chait observes, “would rather win an election with Putin’s help than lose one without it.”

Republicans once dared to call it treason.

If Robert Mueller is allowed to finish his investigation, presumably we will learn to what extent the Trump campaign colluded with the Russians. Given their refusal to accept any criticism of the man on a white horse in the White House, most Trump supporters are unlikely to be persuaded by the facts as presented by Mueller (a decorated war hero and a Republican), or even to believe that such facts exist. In the meantime, the U.S. intelligence services warn that Russia continues to undermine Western democracies at every opportunity. Russia, it seems, has both a persecution complex and a grandiose belief in its own messianic role in world affairs.

Trump himself is devoid of any sense of personal guilt, whether it comes to assaulting women, separating infants from their parents, or lying about everything. Perhaps that preternatural sense of immunity is another reason Trump is drawn to Putin.
sharetweet

“What Russia is no Westerner knows—only some Russians and some Poles do,” the Nobel Prize-winning Polish poet Czesław Miłosz wrote to Thomas Merton in 1960. (Their correspondence has been collected in a book titled Striving Toward Being.) Miłosz first came to prominence in the West in 1953 with the publication of The Captive Mind, his study of the intellectual seductions of totalitarianism. History, not evolution, economics, political science, or diplomacy, is the key to understanding a nation like Russia, Miłosz suggested to Merton. The Soviet Union’s crimes against the Poles, Miłosz thought, gave his countrymen a unique understanding of the Russian temperament, if not the Russian soul. With remarkable prescience regarding the Trump-Putin romance, he wrote, “There is, in formation, a whole body of potential ‘new men’ in American universities and even in business circles: men without heads and without imagination, with three or four eyes and iron teeth, who are secretly in love with the concept of a vast managerial society. One day we are going to wake up and find America and Russia in bed together (forgive the unmonastic image) and realize that they were happily married all along. It is then that the rest of us are going to have to sort ourselves out and find out if there remains, for us, a little fresh air somewhere in the universe.”

Trump is not much of a manager, but like Putin, he does seem to have iron teeth, teeth capable of chewing up clueless adversaries.

Writing at the height of the Cold War, Miłosz nevertheless insisted that the Soviet Union was but “one of the avatars” of an older, recognizable Russian civilization, one that exhibited “astonishing continuity under changing appearances.” Russians, Miłosz wrote, understood themselves to be participants in the destiny of “Crucified Russia, as the Savior of mankind, as a chosen nation opening the paths to true Christianity through suffering.” That is a myth Putin has vigorously embraced with his reestablishment of the Russian Orthodox Church and his denunciations of Western liberal “decadence.” Historically, the myth of Russia’s divine vocation, Miłosz warned, allowed Russians to shirk any sense of personal responsibility when serving the state. “A dream about collective purity achieved thanks to collective suffering is just a dream and in practice it leads to bestiality,” he wrote. Miłosz witnessed “in 1945 the murders committed by Russian soldiers with a deep feeling of sin, but without any feeling of personal guilt whatever.”

Trump himself is devoid of any sense of personal guilt, whether it comes to assaulting women, separating infants from their parents, or lying about everything. Perhaps that preternatural sense of immunity is another reason Trump is drawn to Putin.