It Starts with the Parents
By Fr. Nonomen
U.S. Catholicism
Columnists 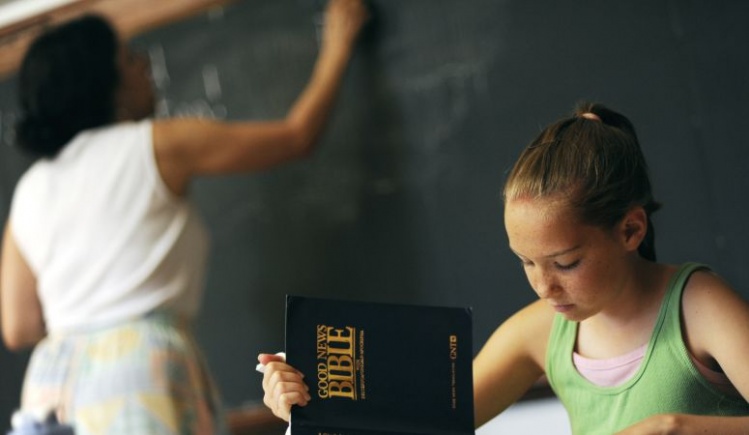 "Remember children, today is Wednesday. Don’t leave anything valuable in your desks because public-school students will be using the classroom this afternoon.” Sister Alphonsine delivered the weekly warning with a sweetness that quite effectively tempered the contempt in her voice. We third graders gave each other knowing glances. Then we would dutifully pack up our World Fair erasers and Mary Poppins pencil sharpeners, say a quick Hail Mary for the redemption of those public-school souls, and fervently hope that Thursday morning would not find our room littered with crushed beer cans and cigarette butts.

That memory returned as I strolled through the Religious Education classrooms recently. Like many parishes, mine has hundreds of children enrolled in its faith-formation programs. These children are students in the local public-school system, and their parents look to the parish to help provide some spiritual education and sacramental preparation. As I made my rounds, I carefully scrutinized the pint-sized parishioners, looking for any signs of a budding Artful Dodger. Nothing. As a matter of fact, the kids cheered me up as they always do, with their impromptu performances of silly songs about lost sheep and by handing me some new artwork to hang on my refrigerator.

Not only times have changed; so has the atmosphere that drifts through the religious-education classrooms. More positive and friendly, certainly, but I also attribute the climate change to a somewhat formidable decision our parish made a few years ago. The number of families with children in religious education was growing at a healthy rate. The problem was many of these families did not seem to be engaged in any other aspect of parish life, including worship. A “drop and run” mentality was developing among the parents, which most of us on staff recognized as an all-too-familiar occurrence in other places where we’ve worked. We knew this was not a unique problem and that it needed to be addressed with an assertive creativity. For a year we read and discussed books, interviewed parents, prayed, and imagined possible ways to address this problem. We finally reached a decision that seemed bold to us—even a little radical—because it was essentially simple.

First, parents could register their child for a year of religious education only in person and only at one of two meetings at the start of the academic year. The dates and times of these meetings were publicized months in advance. We wanted the families to see each other, and to recognize that they are part of a larger community. The meetings were held in the church, a nod to the centrality of the Eucharist, and they were kept efficient, out of respect for the time of busy parents at a busy time of year. It began with common prayer, moved to some thoughts about formation, some practical matters, and then ended with parents filling out registration forms. After these meetings, registration was closed for the year with only a few pastoral exceptions.

Second, there is no financial charge for religious education. Each family was asked to volunteer ten hours as a family over the course of a year in any parish endeavor that appealed to them. There were no “volunteer police” to keep track of these hours, only an honor system.

As anticipated, we lost some families. Six, to be exact. Six out of hundreds. What we hadn’t anticipated (and did not dare to expect) was the surge of energy this unleashed in the parish, particularly in the faith-formation programs. Suddenly, there were greeters at the doors and helpers in the classroom; new children’s choirs formed; special projects were suggested and completed. Many other parish activities benefited as well from this wave of spiritual energy. We kept hearing how so many people had been wanting to connect with the parish, but just didn’t know how. The ten hours (many volunteered more) provided the impetus for that connection.

At the registration meetings, we now allow time for parents to share among themselves stories about their hours of service, and what they think their children might have been learning in those hours. It is exciting to witness these men and women understand, in concrete ways, that their example is educative, as much as anything being taught in their child’s classroom. Through this whole experience, the staff and I are learning as well. We’ve learned again that the Spirit of God will gladly lead, as long as we take the time and have the patience to listen for it.

These years have pointed us in a new direction and there is a great deal more to learn. But as I walk through the classrooms of children, bumping into so many adults, I smile and think of how Sister Alphonsine would be so surprised by all this—so very pleasantly surprised.