Religious Sisters on the Border 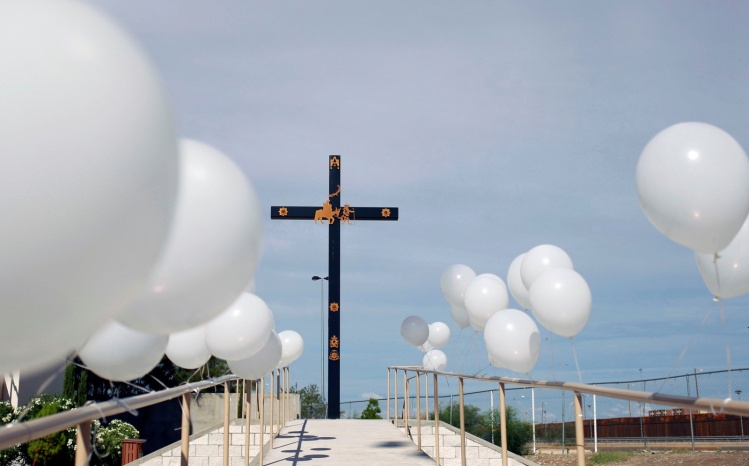 An altar is adorned with white balloons at a "Mass for the Peace" Aug. 10, 2019, in Ciudad Juarez, Mexico, one week after a mass shooting at a Walmart store in nearby El Paso, Texas. (CNS photo/Jose Luis Gonzalez, Reuters)

The day I arrived in El Paso to work with refugee families, my friend Sr. Margaret McGuirk invited me to join her and three other women religious on a visit to Tornillo, a camp built by the Trump administration to house teens who crossed the border alone. In January 2019, protestors were still camped outside Tornillo’s gate, but the vast tent city in the Texas desert was at last being dismantled; there was hope that public outrage had triumphed over government callousness. This was before the news broke of the jail-like border-patrol facility in Clint, Texas, where hungry, dirty immigrant children were left to care for each other. I was the lone layperson in our group, and the visit to Tornillo was my first encounter with the sisters I would live and work with for ten days.

We weren’t allowed inside the camp, so an activist guided us around the perimeter. From outside the high fence, we watched workers strip the walls from an enormous dining tent. Guards marched a gaggle of teens off the soccer field. When our guide found a stray soccer ball in the weeds, the sisters wrote blessings and signed their names. Our guide hurled the ball back over the fence.

I signed, too. But my inner skeptic asked: Blessings on a soccer ball? What good would that do?

Because I was traveling with Margaret, a Dominican sister, I was able to stay at a former convent across an alley from a family refuge. A dozen sisters from around the country—many fluent in Spanish—were also living there. Like us, they had answered a call to provide emergency help to Central American families seeking asylum at the southern border.

To work with sisters is to understand the power of persistent acts of care.
sharetweet

Each day, we crossed the alley to greet dozens of young parents and children newly arrived from ICE custody. We made their meals, found them bedding and clean clothes, and helped arrange for them to travel to family or friends across the country. Once there, they would await their immigration-court hearings. This was before the Trump administration ordered that asylum-seeking families remain in Mexico while they waited for their hearings.

To work with sisters is to understand the power of persistent acts of care. As Mother Teresa wrote: “Not all of us can do great things. But we can do small things with great love.” Earlier in their lives, these sisters had done “great things”—run schools, trained teachers, built missions, started clinics. Now in their seventies and eighties, they were making peanut butter sandwiches, telling weary mothers how beautiful their children are, signing soccer balls.

There was Sr. Katherine from Boston, all energy and wit, with an arthritic shoulder and the logistical skills that make a good ward boss or mayor. At the refuge, she supervised the crowded clothing room, where young mothers pawed through piles of donations to find fresh shirts for themselves and their children. “There’s no point telling them what looks good,” Sr. Katherine told me. “People know what they like.” At day’s end, we straightened shelves for the next wave of asylum-seekers. Other times, Sr. Katherine stood in the front hallway, encouraging anxious families as they waited for rides to the airport or bus station. “I don’t tell them how hard it will be.”

Sr. Therese from New Jersey noticed some kitchen rags needed bleaching. Sr. Laverne from Delaware jimmied a lock and retrieved fleece blankets for departing families. Resourceful, yes, but also clear-eyed and tough-minded about the failings of the church they have served for decades. When I asked how the Catholic Church can recover from the sex-abuse crisis— the shame of its silence, betrayal, and self-protection—Sr. Andrea from Portland answered drily: “Start over with twelve.”

During my mid-century childhood, I experienced religious sisters as teachers, disciplinarians, models of women dedicated to something other than marriage and children. Hair and bodies hidden behind veils and habits, they were objects of respect, fascination, and occasional terror. As an adult, I’ve often seen sisters’ intelligence, their formidable organizational skills. I’ve heard their laments about their aging communities, their fear that their charisms will be lost. For me and others (see the organization Nuns and Nones) religious sisters are model advocates—examples of how faith, community, and practice sustain hope and work in the face of overwhelming odds. The sisters I met in El Paso know well the intractability of poverty, disease, and violence. That does not keep them from working to relieve them.

On previous visits to El Paso, Margaret had noticed how many immigrants wore shoes shredded by their journey. Her quiet appeal to parishioners back home in Minnesota raised $5,000, enough to buy 250 pairs of new sneakers. Her request this Christmas will be humbler still: money to buy socks and underwear.

Lynda McDonnell is a writer and retired journalist who lives in Minneapolis and is active in immigration issues through her parish. Her work has been published in the Washington Monthly, Hudson Review, U.S. Catholic, and elsewhere. She blogs at lyndamcdonnell.com. 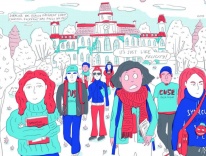 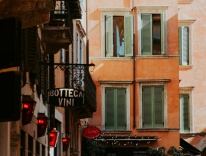 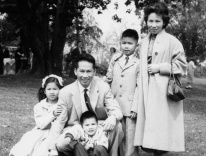