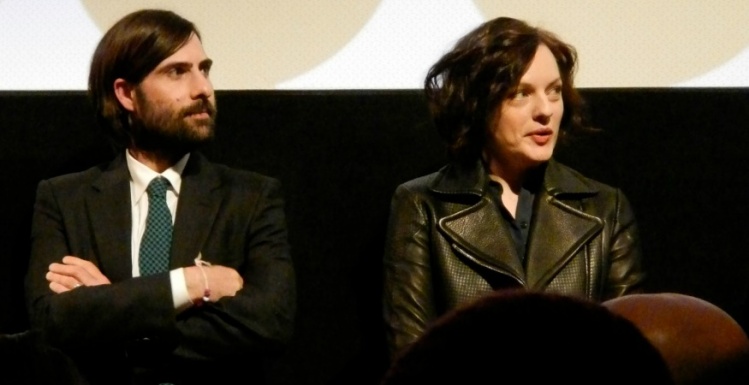 Sometimes rave reviews of dreadful movies seem like a conspiracy to lure you into the theater and force you to endure the same misery the reviewers did. How else to explain the enthusiasm for Listen Up Philip?

There is no end of films about failed and/or troubled writers—from comic to horrific, Sideways to The Shining—and for good reason. The plight of the tormented writer sets art and ambition clashing, in the process generating violent energies that often engulf those around him. The novelist played by Jack Nicholson in The Shining attempts to murder his family literally; others do it psychologically and emotionally.

Alex Ross Perry’s iteration of this popular trope stars Jason Schwartzman (Rushmore, The Grand Budapest Hotel) as Philip Lewis Friedman, a young writer whose second novel is being published, and who exists in a perpetual boil of petulance. The film follows him around New York City as he berates former friends and lovers for their lack of faith in him and verbally abuses his girlfriend, Ashley (Elisabeth Moss, from Mad Men), a successful photographer who seems bafflingly resistant to the recognition that Philip is a toxic dork. Eventually, finding the city insufficient for his needs, Philip accepts an invitation from a famed but lonely older writer, Ike Zimmerman (Jonathan Pryce), to spend a creative interlude as a guest at his country retreat. This would be like inviting bubonic plague into your home, except that Ike is almost as poisonous a person as Philip himself, so vain that even in praising the younger writer—“I loved your book”—he can’t refrain from pointing out that “of course, I had achieved considerably more than you by now.”

Listen Up Philip: How do I dislike thee? Let me count the ways! First, and simplest, is the problem of Philip himself. To use the technical psychological term, our boy is a selfish, pompous ass. Why would you want to spend two minutes with him, let alone two hours?

This problem is not new; it confronts any writer or filmmaker who sets out to portray a deeply unlikable protagonist. The solution isn’t new, either: Make him interesting! One obvious influence on Perry are the films of Noah Baumbach, whose The Squid and the Whale (2005) traced a family’s miseries to the black hole of narcissism and rage created by the father, a failed writer. Played by Jeff Daniels, the father cultivates in one of his sons the adulation that the literary world has denied him, and it’s scary to watch him turn the boy into a snob and a fraud, mindlessly spouting his own opinions. That scariness is key; Baumbach takes what would otherwise be an insufferable bore and redeems him, dramatically anyway, by exploring the consequences of his interactions with others. In Philip, however, characters don’t interact; rather, they stand morosely in the same space and trade enigmatic remarks like “I want you to contextualize my sadness,” then wander off to feel sorry for themselves. The film is perilously static.

It also persistently forecloses its own most promising meanings. One expects, in a film about solipsism, some insight into solipsism—where it comes from, how it works, how it sustains itself. But you won’t find it here. Again by way of comparison, Noah Baumbach’s Greenberg (2010), charting the travails of a failed rock musician who returns to his LA stomping grounds to housesit for his wealthy brother, portrayed a narcissism that mixes arrogance and paralyzing insecurity in equal measure. Immured in his brother’s huge house, Greenberg (Ben Stiller) writes crackpot letters of complaint to various companies whose products and services have pricked his majestic annoyance. Is he delusional and paranoid, or just narcissistic and selfish?

Such questions signal that a film has succeeded in piquing our curiosity. Greenberg is obnoxious, but he’s accessible in his deep woundedness; and Baumbach, capturing his slow float through alienation, delivers an affecting portrayal of anxiety. Nothing in Perry’s film, however, gives us any similar reason to be interested in Philip, much less to care about him. We get no sense of his writing, or of his interest in anyone else’s. (At least Jeff Daniels’s character was a pompous ass who quoted Dickens.) Philip seems to carry with him almost nothing but his own self-pitying story of having been slighted by all those who ever failed to recognize and praise his talents; obsessed with evening the score, he struts around town, bragging and blasting, blasting and bragging. Perry shrinks both Philip and Ike to caricature while failing to hit any significant targets: we get all the reductions of satire, with none of the rewards.

Even worse than the protagonist is the film itself—underwritten, desultorily plotted, and shot in a jittery handheld style with facial shots so close that the focus blurs; I kept jamming myself back in my seat, trying to get farther away. Minor characters are introduced and then clumsily dropped, like a younger writer Philip is going to profile for a major magazine, who later commits suicide—a death seemingly deployed solely to cue a particularly nasty remark by Philip. Blandly unbelievable situations are passed off as trenchant satire, as when Philip, given a creative-writing job at a tony college, flatly tells his class he has no idea how to help them, and stands before them in sulky silence. Meanwhile, a voiced-over narration (by Eric Bogosian) drones on and on, telling us in cloyingly diagnostic terms exactly what Philip and others are experiencing. The narrator’s stilted platitudes, which New York magazine critic David Edelstein wittily described as sounding like a cross between an eighteenth-century moralist and Rod Serling describing alien life forms, sound like a parody of bad writing. Presumably the intention was some kind of penetrating irony, but the reduction of characters and their motives to diagrammable banalities seems perfectly of a piece with the film’s lack of interest in creating anything remotely resembling a complex human emotion.

One scene—one moment, really—highlights the severity of the problem. Elisabeth Moss, a terrific actor who struggles like a fish in the net of this film’s limitations, gets a phone call from Philip, who after bailing out on her is attempting to weasel his way back into her life; hanging up on him, she sits and tries to get hold of herself, and we see a series of protean emotions flash across her face. There is more revealed human need—and more acting—in those thirty seconds than in all the rest of the movie. Perry has undertaken a risky gamble, making a film about jaded people that is itself jaded, and the result is a tedious and misguided farce.

To close the circle on this review, let me spend an aggrieved moment looking at the tricky way a critic can take a film’s vices and alchemize them into virtues. Here is the New York Times’s Manohla Dargis on Listen Up Philip’s annoying camerawork: “Even as it grates, the visual style proves a seamless fit for this story because the embodied camerawork—you intuit the person behind the machine with every tremor—is as much an assertion of authorship as [is] the film’s on-and-off narrator.”

Embodied camerawork? Assertion of authorship? Manohla, say it ain’t so! This kind of shifty move recalls me with dread to fiction-writing classes I have taught, where some too-smart kid would mount a high-flown and impressive aesthetic defense of this or that glaring fault in his story. If I were to alchemize Listen Up Philip’s flaws into gold, I might comment that “the overall—and brilliant—effect is of a purposeful casualness, as if the film we’re seeing were a rough first draft by one of the writers it satirizes.” See how this game is played? Welcome to the Emperor’s New Clothes School of film criticism!

The problem with bad ideas is they can be marshaled into an argument and made to sound so convincing. A film, however, is not a set of ideas, but an experience. And Listen Up Philip is one of the most dissatisfying experiences I’ve had in a while.