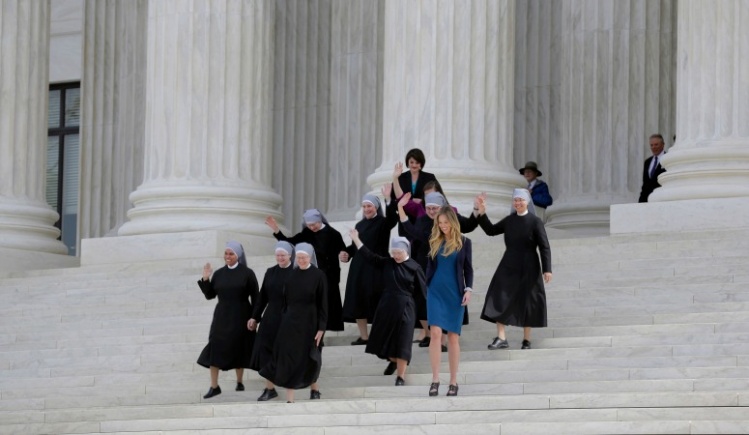 The Little Sisters of the Poor, a religious order that cares for the dying and employs non-Catholics, objects to the contraception mandate in the Affordable Care Act, saying it violates church teaching and compels them to cooperate with evil. The Obama administration has properly given the Little Sisters an exemption from the mandate. The exemption requires the Little Sisters to file a one-page form that will transfer the responsibility of providing contraception coverage for employees to insurance companies or the government. The Little Sisters claim that even submitting this exemption form is a substantial burden on their religious liberty. The resolution of this conflict is now in the hands of federal appeals courts, which have been directed by the Supreme Court to find a compromise that balances the government’s compelling interests with the least burdensome method of compliance on the part of the plaintiffs.

In the Middle East, Christians face threats to their lives as well as to their religious freedom. In Iraq, Syria, and Libya, Islamic State fighters have frequently murdered Christians, beheading them and sometimes crucifying them. What do the plight of the Little Sisters—whose case has been taken up by a host of conservative activists and given a sympathetic hearing by the highest court in the land—and the fate of persecuted Christians in the Middle East have in common? Besides a shared faith and a noble commitment to live out that faith, there would appear to be few similarities. But if you believe that, says the U.S. Conference of Catholic Bishops, you just don’t understand how precarious the rights of American Christians have become in the malign era of same-sex marriage and Obamacare. The USCCB has even made a slick video to educate Americans about those dangers.

The video is part of the bishops’ ongoing religious-freedom campaign and commemorates the fiftieth anniversary of Dignitatis humanae, Vatican II’s Declaration on Religious Freedom. It features a lot of ominous music, billowing American flags, many talking heads, impressive women religious, more American flags, scenes of violence, and Islamic State videos of Christian prisoners about to be executed. The Little Sisters case is presented as emblematic of a much broader governmental threat. Archbishop William Lori of Baltimore notes that while genocide is being carried out against Christians in the Middle East, similar forces are evident in the “increasing exclusion of religion from the public square here.” The removal of a Ten Commandments monument from the grounds of the Oklahoma State Capitol is one example in the video. Since the monument was erected only in 2012, and clearly violated the state constitution’s prohibition against using public property to support any church or “system of religion,” its removal hardly seems a violation of the nation’s heritage of religious pluralism and freedom. An important part of that heritage is state neutrality toward different denominations or religions.

After a commentator laments the Supreme Court’s same-sex marriage decision, the theologian David L. Schindler, a critic of political liberalism, suggests that the threat to religious practice in the United States may look benign but is far from it. Schindler has written that “the state has a duty...to recognize religion and to favor conditions that foster its growth.” The video is coy about the exact nature of the contemporary threat to the church. “The government lately has been forcing us more and more to cooperate with its views,” according to law professor Helen Alvaré, an adviser to the USCCB. “But I see this as the flip side of the coin, of the government stopping us from practicing our faith.” Curiously, this remark is used to frame a shot of a session of Congress in which Hillary Clinton appears. Alvaré also argues that in the absence of religious freedom, “there is no transcendent authority, there is only majority will, then the law is the only norm and the people in power now are always the only power.” This is true enough in the abstract, but Alvaré seems to be suggesting that requiring the Little Sisters to submit a form exempting them from a law is really the flip side of stopping Catholics “from practicing our faith.” In a pluralistic society, religious believers comply with laws they object to every day without compromising the practice of their faith.

Perhaps the oddest and most revealing aspect of the USCCB video is that the word “contraception” is never mentioned. Murder, torture, genocide, and riots all make an appearance, but contraception and the Obamacare mandate are evidently too complicated to bother explaining. Instead, the Little Sisters are being “harassed” by the Obama administration, “compelled to participate in an insurance program that is against the precepts of their faith.” Is that an accurate, or even fair, description of the conflict, or of Catholic precepts about what constitutes cooperation with evil? Painting this issue in such black-and-white terms makes the USCCB once again look like the unreasonable party. That is hardly a sound strategy, especially if the bishops are convinced that grave threats to religious liberty are on the horizon. Serious threats deserve serious responses, not melodrama and hyperbole.