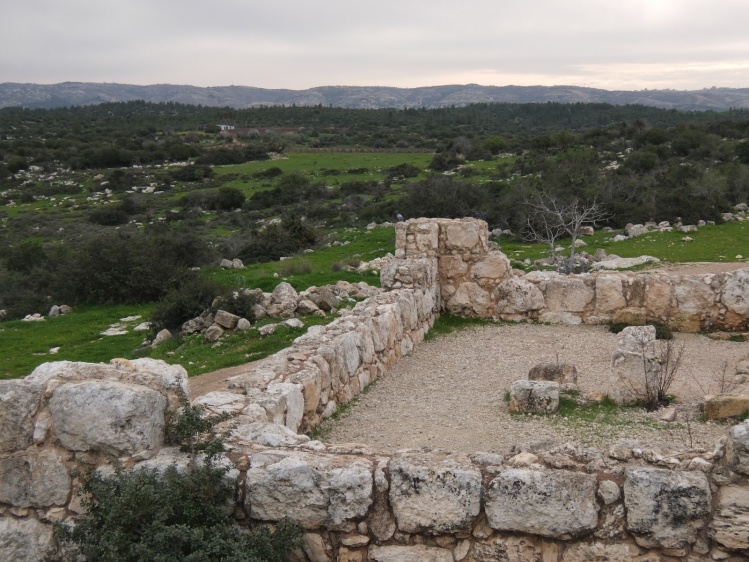 This summer I’ll be at Tel Hadid, a new archaeological dig site about fifteen miles northwest of Jerusalem. Set on a high hill with olive plantations and striking views of Israel’s landscape, the site is pregnant with the remains of three millennia of human civilization. The dig proceeds methodically, beginning at sunrise and ending around lunchtime, when the heat becomes oppressive. Moving slowly, excavators begin by marking off small squares of land. They then work down into the soil with pickaxes, uncovering first pottery shards, bones, and ancient debris. Hopefully, more substantial remains follow, like inscriptions and building foundations. As they exhume layer after layer of ancient ruins, the earth itself seems to pulse with a mystery that both seduces and repels. It’s an encounter with a seemingly immortal past, one I want to preserve and protect. But it’s also a haunting confrontation with vulnerability, disintegration, and death—and it leaves me uneasy.

I feel the same way when I ponder the fractures in our lives, institutions, and societies, damage for which we are responsible. I see signs of it everywhere, especially in the church: abuse of the most vulnerable, institutionalized misogyny, discrimination against non-heterosexuals, financial greed, and prideful ego, among others. The suffering seems endless, hitting me viscerally and making me nauseous. I doubt I’m alone in my reaction. But as a scholar of the Hebrew Bible and a college professor, I know this isn’t the end of the story. The Hebrew Bible, too, is filled with stories of ruin—each preserved and transmitted by ancient scribes and editors who intuited that human frailty has something to teach us.

As an example, let’s explore in detail King David’s rapid rise and fall in First and Second Samuel. As we watch things fall apart, we come to see that destruction paves the way for rebuilding. David is initially presented to us in 1 Samuel as a golden boy, moving quickly from humble shepherd, to military leader, to king of Israel. He’s a shining moral exemplar by comparison to the unhinged King Saul, who is overcome with jealousy and then rapidly self-destructs.

Second Samuel relates the story of David’s reign. Like Saul, David is seduced by power and privilege, precipitating his moral unraveling. The linchpin of the story comes in 2 Samuel 11–12, a text littered with lacunae—narrative gaps that heighten the reader’s sense of tension and discomfort. We hear no descriptions of David’s emotions or thought processes, no details of how events unfold, no editorial moralizing until the end. Such terse omissions are the trademark of effective biblical storytelling. Unlike the circuitous, drawn-out details of, say, a Homeric epic, the Bible provides only the skeleton, that which is most necessary for our understanding. We’re left to fill in the gaps ourselves.

Deliberate word choices in the original Hebrew yield further insights into David’s moral wavering. The first verse of the story, 2 Samuel 11:1, locates us in the “turn” or spring of the year—teshuvat, from the root shuv, which means “to turn” or “return.” It’s the same as the Hebrew word for repentance, teshuvah, which is a literal turning back, a return to God. The text therefore plays with the idea of David turning and returning as the season changes. Ironically, though, this is hardly a story of repentance, but the beginning of the end for David, who subsequently spirals out of control as he turns away from God.

We also lose something in the rhythm of our translations. In Hebrew, the storyline of 2 Samuel 11 proceeds abruptly. Its crisp cadence, marked by the repeated use of the verb “to send” (šālaḥ), creates a feeling of rapid, inexorable escalation. David first “sends out” all his officers to war as he remains behind in Jerusalem. Bored and listless, he strolls on the roof and sees a woman, Bathsheba. (English translations state that she is “very beautiful,” but in Hebrew she is literally “very good” or “desirable in appearance,” ṭôbat marʾeh, underscoring not her physical beauty, but David’s desire to possess her.) He “sends out” for her and his messengers take her. He sleeps with her; she goes home. Their liaison is possibly a rape—David has complete power over her—yet the text offers no details. The only time we hear Bathsheba’s voice in the story is when she “sends out” a message of her own: “I am pregnant.”

The conclusion of David’s narrative in 2 Samuel arrives just as bluntly. Like a runaway train, the rhythm intensifies as the plot becomes more complicated, implicating multiple characters and culminating in the murder of Bathsheba’s husband, Uriah. But God is silent throughout—that is, until a single, understated line at the end halts the action: “and this thing that David did was evil in the sight of the Lord” (2 Samuel 11:27).

The ambiguities of the Hebrew Bible often make my Catholic students profoundly uneasy. They want the Bible to give them clear, unambiguous answers.
sharetweet

This moment of tension and suspense gives the authors of 2 Samuel an opportunity to insert an episode that demonstrates how stories themselves can force us to reconsider our behavior. In 2 Samuel 12, the prophet Nathan arrives at David’s court, ostensibly to condemn him. He then shrewdly tells a parable about a rich man’s greed and entitlement. The story at first draws David in, inciting his self-righteous rage toward the rich man. It’s at this point that Nathan indicts him: “You are the man!” A series of divine accusations follow, ending with the climactic blow: by his secretive behavior, David has “despised” (bāzāh) the word of God. And God in turn will bring everything to light: the same “sword” by which David killed Uriah will forever punish David’s house, destroying the lives of all of his children in 2 Samuel 13–19 until only Solomon, Bathsheba’s second son, remains.

After Nathan’s searing indictment, David repents. It saves his life, but neither redeems his reputation nor protects his children. And that’s the point, the lesson for us: despite his sincere repentance, David’s actions have ruinous consequences that cannot be undone.

Later biblical texts wrestle repeatedly with David’s shadows. Uncomfortable portraying David in a negative light, the authors of the later books of Chronicles choose to elevate him, excising all the questionable material of 2 Samuel 11–19 as they retell the history of Judah’s kings. Later texts (laws regarding the king’s rights in Deuteronomy 17:14–20) take an entirely different approach, stripping the king of any privilege or authority that would place him above the people. David’s only role here is a religious one: he is to keep a copy of the Teaching (literally “Torah”) near him at all times and read from it faithfully. Deuteronomy, it seems, is well aware of the seductions of power. It’s therefore all the more striking that the editors of 2 Samuel carefully preserved the messy reality of David’s tryst with Bathsheba (and its brutal aftermath) rather than attempting to clean it up.

But ultimately the stains of David’s life do not prevent him from being elevated in later biblical and post-biblical tradition. Over time he becomes Judah’s exemplar king. Exilic and post-exilic Judaism yearned for the return of the king—a yearning that developed into messianic theology, the promise of a Messiah born from David’s line. In the New Testament, the genealogy of Jesus in the Gospel of Matthew also underscores David’s tangled backstory. Matthew traces Jesus back to David through Solomon, “whose mother was the wife of Uriah” (Matthew 1:6). Not only is it striking that Matthew includes a woman in the patriarchal line, but he also emphasizes that she was not David’s wife, but Uriah’s.

And Matthew insists that Solomon’s mother is not Jesus’s only complicated female ancestor. In the same genealogy, we also find Tamar (a Canaanite whose father-in-law mistakes her for a prostitute and sleeps with her); Rahab (an actual prostitute); and Ruth (a Moabite). In Jewish tradition, all these women were righteous, going to great lengths to achieve God’s will—albeit in shocking, even scandalous ways. For Matthew, they point the way to Mary, the mother of Jesus. He draws this dark history into light, thereby enriching Jesus’s humanity. In the end, then, David is redeemed—though not during his lifetime, or according to his expectations.

Our knowledge of David’s backstory changes how we read the Hebrew Bible today. One key caution for Christians is that we cannot read it with the same set of expectations we bring to the New Testament texts, which reach us in far less fragmentary form. They’re certainly complex, but they were composed over a relatively short span of time—just a century or so. The Hebrew Bible, on the other hand, is much more ancient. It’s like an archeological tell, containing material that dates back hundreds of years, perhaps more. Its many scribes, editors, and compilers did not obliterate the past, but preserved and added to it, working in new material around the edges of the old, adding layer upon layer. The Bible we inherit is therefore both too much and too little: interpreting it correctly requires patience and skill, and a willingness to parse its strata.

Regrettably, the ambiguities of the Hebrew Bible often make my Catholic students profoundly uneasy. Rather than engage with it as ancient people or as contemporary Jewish audiences would, they want the Bible to give them clear, unambiguous answers. They don’t like the struggle, and their discomfort is elevated by their lack of familiarity with the texts. But in a certain sense they can be excused: much of the Hebrew Bible isn’t read in the Catholic Church’s liturgical cycle. Its stories are far too long and much too complicated to include in the Liturgy of the Word, with its limited space for the First Reading. The bits and pieces of the Hebrew Bible that we do find there, broken off violently from the whole, are often interpreted superficially, and solely in light of the readings from the New Testament.

But the messy stories of the Hebrew Bible and its disjointed literary strategies needn’t make us uneasy. They can draw us deeper into our current predicaments, such as the painful reality of a church in crisis. Like David in 2 Samuel, we’ve spun out of control, inflicting damages as an institution that cannot be undone. I desperately wish that we would learn from David. That we would stop trying to forget, hide, and cover up our crimes. Continuing to live in a rotten structure will only bury us alive. Instead, the Bible urges us, begs us, to let things die. To bring everything to light, without flinching. The only way to understand the present, and thereby recover and heal, is to intentionally remember, preserve, and grapple with the ruins our actions have wrought. I’m convinced that once we do so—if we do so—we’ll be reborn like David’s line, and redeemed beyond our wildest expectations.