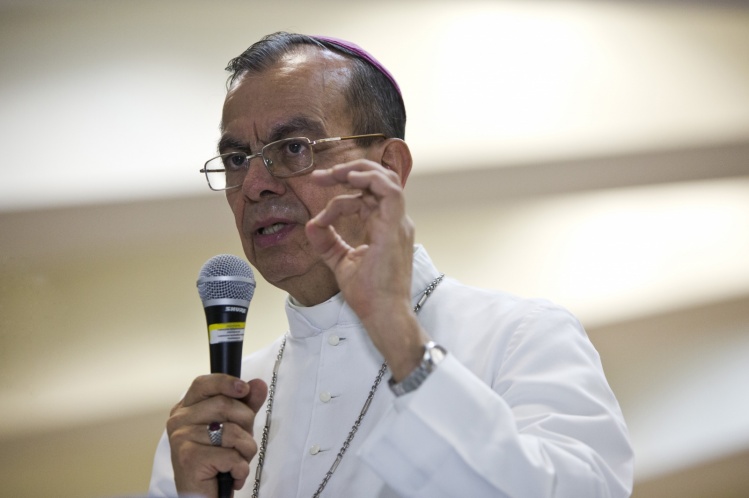 When Pope Francis places a red biretta on the head of Cardinal-designate Gregorio Rosa Chavez this Wednesday he will be rehabilitating yet another Catholic personality that was once shunned by the Vatican.

The seventy-four-year-old Salvadoran is one of five men Francis will make papal electors when he formally adds them to the elite College of Cardinals at the June 28 consistory in St Peter’s Basilica.

Rosa Chavez has been auxiliary bishop of the Archdiocese of San Salvador since 1982 when he was only thirty-nine years old. Today he serves as pastor of a one of the city’s largest parishes.

Known for his tireless efforts to promote the prophetic message of the now Blessed Oscar Romero, the bishop was for years treated with suspicion by conservative forces in Rome—just like the martyred Romero.

Both men were given the cold shoulder by John Paul II’s inner circle, which routinely blocked their requests for a private meeting with the Polish pope when they visited the Eternal City. Rosa Chavez, like Romero, was considered too close to the Marxists and other leftists in their small, war-torn Central American country.

Thus he was not chosen to succeed Romero as head of the Church of San Salvador, where the previous five years he had been seminary rector. Instead, three years after the archbishop’s 1980 assassination the Vatican filled Romero’s vacant post with Bishop Arturo Rivera Damas SDB.

Rosa Chavez, on the other hand, was never made head of a diocese. He remained San Salvador’s auxiliary and currently serves under Romero’s third consecutive successor.

In Church politics, that speaks volumes. It means the decision-makers in Rome have no confidence in a man’s leadership skills, his loyalty to the Vatican or his orthodoxy.

That was certainly the case during the seemingly never-ending reign of John Paul II (1978-2005), as well as in the relatively short period that Benedict XVI was on the Chair of Peter (2005-2013). Rosa Chavez was only sixty-two when Benedict was elected and, although the German pope replaced the heads of five of El Salvador’s nine dioceses (twice in one case) during his pontificate, he never promoted the long-time auxiliary to be an ordinary.

Now Pope Francis is making him a cardinal. This is not only a move to recognize Rosa Chavez’s prophetic witness, but also another step towards the full rehabilitation of the man the bishop has held up as his model and guide—the almost sure-to-be-sainted Oscar Romero.

This is not the first time the Argentine pope has restored the honor and dignity of a once-shunned church leader. Far from it.

Just four days after his election Francis stunned many admirers and aides of his retired predecessor (the theologian-pope) when, during his very first Sunday Angelus address, he touted the works of another German theologian: Cardinal Walter Kasper.

“In the past few days I have been reading a book by a cardinal—Cardinal Kasper, a clever theologian, a good theologian—on mercy,” the new pope said.

“And that book did me a lot of good… Cardinal Kasper said that feeling mercy, that this word changes everything… A little mercy makes the world less cold and more just. We need to understand properly this mercy of God, this merciful Father who is so patient...” Francis said.

Kasper, who served as president of the Pontifical Council for the Promotion of Christian Unity from 2001-2010, was seen as Josef Ratzinger’s most formidable Rome-based theological sparring partner. They disagreed over the years on several issues.

And Francis not only praised Kasper as a “good theologian,” but he also asked him to do the theological groundwork for the two gatherings of the Synod of Bishops on marriage and the family.

Then two months into his pontificate the Jesuit pope named as bishop one of his most trusted theologians from his Latin American homeland, a man whom Vatican officials tried to block from becoming rector of the Catholic University of Argentina.

Back in 2009, when he was still Archbishop of Buenos Aires, the then-Cardinal Jorge Mario Bergoglio, SJ appointed Fr. Victor Manual Fernandez as the pontifical university’s rector. But for over a year and a half the Congregation for Catholic Education in Rome refused to give its necessary approval.

It was later reported that Archbishop Jean-Louis Brugués OP, the congregation’s No. 2 official and a theologian in vogue in the Ratzinger pontificate, was the one who questioned the soundness of Fernandez’s theology.

Bergoglio protested and eventually the rector was confirmed in May 2011. One year later Benedict XVI appointed Brugués head of the Vatican Library, putting him in line for a red hat. But unfortunately for the Dominican, Benedict resigned and Francis decided that the Librarian of the Holy Roman Church—at least this one and at this time—need not be a cardinal.

Victor Manual Fernandez, however, was ordained titular bishop and given the title “archbishop.” He is today one of the principal theologians and ghostwriters of Francis’s pontificate.

The Argentine pope’s work of rehabilitating men once on the outs with authorities in Rome did not stop there. In fact, the list is long.

The Argentine pope’s work of rehabilitating men once on the outs with authorities in Rome did not stop there.
sharetweet

Think of Loris Capovilla who was John XXIII’s private secretary and, in the long decades following the Good Pope’s death, his living memory. Neither John Paul II nor Benedict XVI thought it important to honor Archbishop Capovilla by making him an “honorary” (non-voting) cardinal, as they did with so many others, after he turned eighty back in 1995.

But Francis did so in his first cardinal-creating consistory in 2014 when Capovilla was ninety-eight years old. The pope said it was to honor both the man who called the Second Vatican Council (1962-1965) and the former priest-secretary who kept John’s memory alive.

Pope Francis has also given renewed prominence to other men who fell from grace in previous pontificates: people like Belgium’s Cardinal Godfried Danneels and the country’s former nuncio, Karl-Josef Rauber. The pope did so by refusing to give the red biretta to Archbishop André Léonard, the man Benedict appointed as Danneels’s successor in Malines-Brussels in 2010, despite the fact that Archbishop Rauber had not put Léonard on the short list of candidates and the cardinal had protested his possible appointment.

In February 2015 when Rauber turned eighty the pope made the former nuncio a cardinal, not Léonard, whose resignation would be accepted nine months later when the Belgian turned seventy-five. Francis replaced Léonard with Josef De Kesel, the man Rauber and Danneels had originally wanted as next Archbishop of Malines-Brussels. De Kesel was made a cardinal within a year of his appointment.

In the United States there is the example of Joseph Tobin CSSR, the former two-time superior general of the worldwide Redemptorist Order who then served a short stint as archbishop-secretary at the Vatican’s congregation for consecrated life (2010-2012).

Tobin was, plain and simple, “shafted” by doctrinally rigid or ideologically driven American bishops in Rome like Cardinals Bernard Law, Raymond Burke, J. Francis Stafford and William Levada. They thought Archbishop Tobin was too soft on the U.S. religious sisters whom the pontificate of Benedict XVI had put under “investigation.”

These men and others in Rome pushed for Tobin’s removal. Because of his rank as archbishop, and because Benedict XVI genuinely liked him, the Redemptorist was appointed to head the Archdiocese of Indianapolis rather than made an Archbishop-bishop of a small diocese as some had hoped.

Pope Francis shocked most people when he announced that Tobin would be created cardinal, which took place at a consistory in November 2016. A cardinal in Indianapolis was unprecedented in U.S. history.

But that was only the first step. The real surprise came some days later when the pope transferred the cardinal-designate to be Archbishop of Newark, New Jersey—again another place that had never been led by someone with a red hat.

The deeper significance of this has escaped the attention of most people. Many Catholics, especially Americans, have pointed to Cardinal Blase Cupich of Chicago as Francis’s most significant game-changing appointment in the United States. That may be true at the national level and concerning Church bureaucracy, an area in which Cupich is savvy and skillful. But when it comes to having an impact on the global Church, it is the pope’s promotion of Joseph Tobin that is likely to have a much more considerable long-range consequence.

An internationalist with many years of experience of running a worldwide religious congregation from headquarters in Rome, Tobin knows the wide-ranging issues and customs—several languages, too—that make up a Catholic Church that, as the pope likes to remind us, enjoys unity within diversity. Cardinal Tobin has the unique potential and background to emerge as a leader in the College of Cardinals

But Francis’s rehabilitation of him, and many others not cited here, has been aimed not solely at righting a wrong or restoring honor and dignity to men that some of the high-handed landlords of Holy Mother Church once viewed with suspicion and even contempt.

No, the current pope has sought to recognize the prophetic witness and creative fidelity of these men—and there are women, too—who have been found wanting by certain prelates who stand in judgment over God’s sons and daughters.

We can surely expect Pope Francis will continue to identity and affirm even more of these prophetic voices that others before him have been reluctant or unwilling to hear.