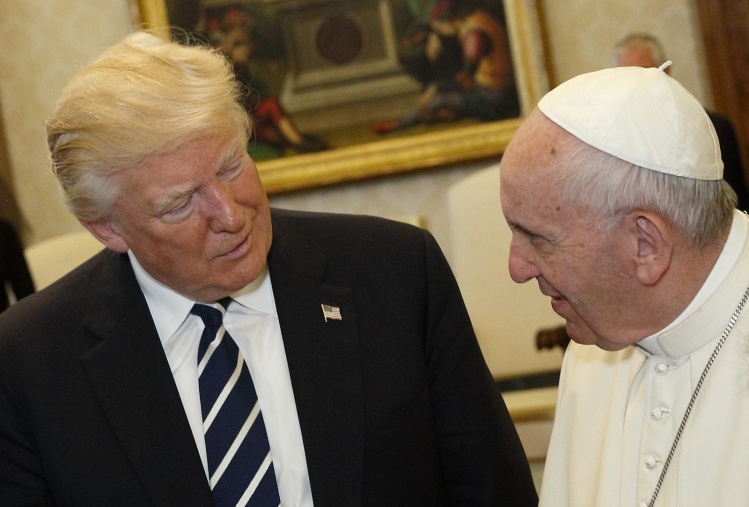 There is probably no classier operation on earth than the Holy See’s diplomatic apparatus. And that certainly extends to the way its officials welcome guests to the Vatican.

The much ballyhooed encounter between Donald Trump and Pope Francis last Wednesday was a clear reminder of how the Holy See can even ensure that potentially embarrassing situations come off without a hitch.

All the predictions of a tense or even ugly showdown between the bridge-building pope and a president bent on building walls turned out to be absolutely wrong—as some of us confidently knew they would be.

The early morning visit of the mercurial head of the world’s only super-power made to the most credible spiritual leader on the planet and went near perfectly. At least from a “visuals” point of view.

And that is just the way the Vatican and the White House had planned it all along. The optics had to be just right. No one (read: the impulsive Trump) would end up being embarrassed and with egg on his face.

The choreography of the event was subdued, but ceremonious. And for once, at least, it seemed to be a visit that was no more, but also no less, than “cordial”—that famous adjective the Holy See uses to describe talks between the pope and nearly every head of state.

No one (read: the impulsive Trump) would end up being embarrassed and with egg on his face.
sharetweet

When Trump arrived at the entrance to the Apostolic Palace in the St. Damasus Courtyard there to welcome him was a broadly smiling Archbishop Georg Gänswein, prefect of the papal household. The U.S. leader then proceeded to shake hands with a dozen or so fancy-dressed papal gentleman who, one-by-one, said with a smile: “Welcome to the Vatican, Mr. President.”

In a place steeped in the staid Old World etiquette associated with royal courts, only the archbishop, still considered a heartthrob by Rome’s fading aristocracy, made an effort at jocularity.

“This elevator is not like the elevators in Trump Tower,” he quipped in his German accent as he and the nervous looking president stepped into an old-fashioned lift. Or did the archbishop say it is like those in Trump Tower? No one was quite sure. But it didn’t really matter.

This was just small talk. And the prefect of the papal household was employing it to ease any tensions that Trump and the White House delegation might have felt. It continued as they were being led on a long and slowly paced procession through the ornately frescoed halls of the papal palace towards the library where the pope receives world leaders. It sure looked like Archbishop Gänswein was enjoying his role in accompanying The Donald, proudly explaining to him some of the more outstanding accessories and pieces of art in a palace meant to impress.

And the usually scowling and dismissive Trump seemed to be just that: impressed.

Pleasantry upon pleasantry ensued from the Vatican side, always with a touch of grace, but never gushing or over the top.

And the U.S. leader, who seems to get a kick out of being boorish, was actually almost well behaved – at least during those moments journalists could witness. He did not growl at anyone or get pushy and rude. This surely came a great relief for the diplomats at the U.S. Embassy to the Holy See who played a key role in organizing the president’s visit.

But if it was a miracle, it was only temporary. The next day at a NATO summit in Brussels, Trump was back to his more familiar bull in the china shop routine.

At the Vatican, however, he almost seemed normal and gentlemanly. It’s a side of him the world has not seen very often. Was it the panoply of the Apostolic Palace’s centuries-old wealth, and a reminder of the Holy See’s power, that tamed him? Or was this merely a rare display of self-discipline, knowing—as his advisors had surely warned him—that he stood to lose a lot by being a bad guest in the Vatican. He might get away with acting up elsewhere, but not here.

Even when he eventually greeted Pope Francis, Trump did not try to yank the pope’s arm out its socket, that strange shenanigan the president often pulls on other people, including VIPs. No, Trump was respectful. That was refreshing.

The pope, for his part, seemed at first a bit hesitant. He approached the unpredictable president as if he were encountering some strange, erratic animal. Think St. Francis meets Brother Wolf.

The two men spent just less than thirty minutes in private conversation behind closed doors, only a desk between them and a translator (Msgr. Mark Miles) beside them. We don’t how that meeting went or what exactly they talked about. However, it was reported that the Francis spoke in Spanish, rather than Italian. An astute interlocutor would have got the message: the pope was speaking the language of immigrants from south of the U.S. border where Trump has threatened to build a wall.

The Holy See issued brief and very general communiqué, agreed upon by the White House, stating that the talks had been “cordial” (that word again). And that included the fifty or so minutes Trump and his entourage spent in a subsequent meeting with the pope’s Secretary of State, Cardinal Pietro Parolin, and his staff.

“During the cordial discussions, satisfaction was expressed for the good existing bilateral relations between the Holy See and the United States of America, as well as the joint commitment in favour of life, and freedom of worship and conscience,” the statement said.

It then expressed hope that Church and State in the U.S.A. might engage in “serene collaboration” to help people through “healthcare, education and assistance to immigrants.”

Naturally, as is usual for such meetings, the two sides also discussed “various themes relating to international affairs and the promotion of peace in the world”.  Additionally, the communiqué said an emphasis was placed on the importance of “political negotiation and interreligious dialogue, with particular reference to the situation in the Middle East and the protection of Christian communities”.

One can be almost certain that the second part of Trump’s visit to the Vatican—that is, the meeting with Cardinal Parolin’s people—is where anything close to the meat and potatoes of these rather broad themes were dealt with. The president’s brief, private conversation with the pope was likely more of a “get to know you” opportunity, an initial eye-to-eye encounter with two men so very different in beliefs, including how to deal with almost every major issue facing our world today.

Pope Francis knows exactly who Donald Trump is—as much as anyone is capable of knowing him. And that means he knows there are only a few small areas where the two of them are in sync on the issues that matter. But that’s not important. The pope is much more concerned with creating some level of trust and a laying a basic foundation for a bridge that can try to link their different points of view.

Their private meeting was an important first step. Usually such encounters, unless they are really unpleasant confrontations (which this one was not), make it much more difficult for someone to demonize even a person with whom he or she has serious disagreements.

The American president seemed genuinely pleased with the way everything went. And U.S. diplomatic sources in Rome called the event “highly successful”.

But, of course, we’re dealing with the prickly and highly unpredictable Trump, so it’s hard to say how he’s feeling about his meeting with the pope today or how he’ll feel tomorrow. The Donald seems to change his mind even more frequently than most people change their clothes.

The pope and the Vatican have made a very clear effort to engage a man that has an extremely short attention span and an even slighter regard for facts. But they know it is more conducive to build bonds of collaboration and friendship with all players, even those who seem diametrically opposed to the Vatican on key principles and issues. That’s based on the belief that most of us are a mixture of good and that no one is without redemption.

The Holy See demonstrated a lot of class and goodwill to make sure that there would be no embarrassing moments during Trump’s visit to the Vatican. That was punctuated by a highly unusual and unprecedented email the Holy See Press Office sent privately to journalists. It included a series of what one might call “pious photos” of Mr. and Mrs. Trump. In one they are standing hand-in-hand looking in awe at Michelangelo’s “Last Judgment” in the Sistine Chapel. In another they are before the artist’s famed “Pietà” in St Peter’s Basilica.

There were also several photos of the First Lady visiting sick children at the nearby Bambino Gesù Pediatric Hospital. It almost looks like an attempt to cast the former model in a similar light as the late Princess Diana who made humanitarian visits alongside the now-sainted Mother Teresa.

One would not be surprised if the White House communications department had sent these photos to the journalist in the Vatican press corps. In fact, that would have been expected.

But it was the people in the Holy See Press Office that did so. They have never sent such pictures of other visiting dignitaries, unless they included the pope or another religious figure. This was an absolute first.

It’s certainly not because they think the Trumps are saints, though some people might be tempted to see folks in the press office folks as Trump’s dupes.

That would be an unjust misreading of the gesture.

Instead, it was sign of goodwill—and perhaps a gamble—to further engage, rather than alienate, a powerful man whose actions can produce much good or terrible harm for peace and development in the world.

And a few photos are certainly worth that gamble.