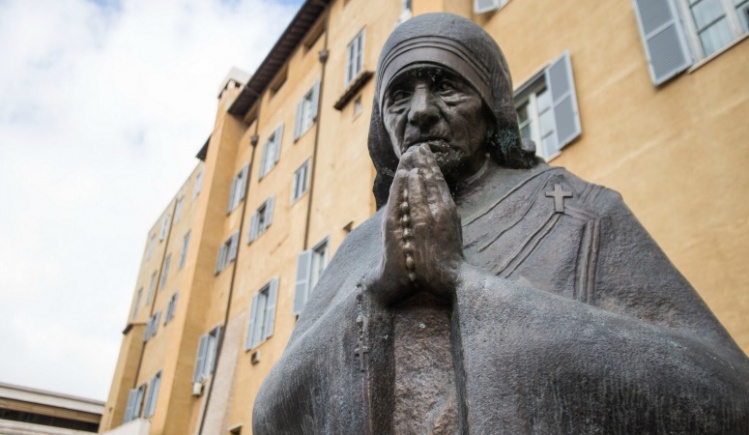 Church officials in Rome are calling it the biggest public event of the current Holy Year of Mercy. This Sunday, Pope Francis will officially canonize Mother Teresa of Calcutta, an iconic figure whom many considered a saint even during her lifetime.

The ceremony, which will take place within the context of an outdoor Mass in St Peter’s Square, comes just a day before the nineteenth anniversary of the Albanian-born founder of the Missionaries of Charity’s death on September 5, 1997. And it marks nearly thirteen years since John Paul II declared her “blessed” in October 2003.

In many ways Mother Teresa, who is often called the “saint of the gutters,” is a model saint for the “poor Church for the poor” that Pope Francis is trying to engender.

And although she did not escape criticism and controversy for some of the methods she employed to fulfill her religious order’s fourth vow of giving “wholehearted free service to the poorest of the poor,” this 1979 Nobel Peace Prize winner was a remarkable woman.

My first of several encounters with Mother Teresa was thirty years ago, not long after arriving in Rome as a seminarian at the North American College (NAC). As the college’s “new men,” we were asked to select an apostolate—that is, some sort of pastoral work to be involved in once or twice each week.

Several NAC-sponsored apostolates were available at the time, including doing service work with the Sant’Egidio Community in Trastevere, teaching catechism to high-school students at Marymount Academy, and accompanying families with seriously ill children at the Bambino Gesù Pediatric Hospital adjacent to our college.

We also had the option of working with the Missionaries of Charity at their hospice for homeless men (mostly immigrants). It was located on the Celian Hill in a large, dilapidated building near the order’s international headquarters next to the famous Church of San Gregorio Magno (St. Gregory the Great).

The NAC formation staff encouraged us to try out two or three of these apostolates before making a definitive choice. In the end, I opted for the children’s hospital. But I’ll never forget my brief experience with the Missionaries of Charity.

One afternoon—it was probably in November 1986—an older seminarian who had been working with the nuns his entire four years in Rome took a few of us “new men” over to San Gregorio. I remember us chatting excitedly (and, for sure, overly romantically) about doing “real ministry with the poor.” This, we reasoned, would balance out the lectures, seminars, workshops, and so many of the other seemingly ivory-tower activities that were required of us.

Well, my excitement quickly evaporated. Instead of being allowed to heroically tend to the needs of the poor, as we knew Missionaries of Charity did, we were shown to a musty room filled with piles and piles of used clothes. Our task was to sort through this mess and separate trousers from shirts, undergarments from socks, coats from hats and so forth.

After about an hour of this mindless task—which, at the time, I could not see as making any great contribution to my “pastoral” formation—two sisters came and took us to another, larger work room. Here, for a further 45 minutes or so, we were to help reupholster old chairs.

When it was time to go back to the college, I remember feeling quite disappointed. But one of the nuns told us something to the effect that this tedious, behind-the-scenes work we had just done was crucial to helping them carry out their ministry. And that was that. Or so I thought.

"If you’d like, we can now go see mother," another nun said. I blurted out, "Who is mother?" That’s how much this entire experience, with my ridiculous and inflated notion of performing heroic ministry to the poor, had left me deflated.

"Mother Teresa," the nun replied. "She happens to be here in Rome right now."

I was once again excited. I would meet the famed living saint!

But as we entered the convent, we were asked to remove our shoes and ushered into a chapel full of nuns. They were all sitting on their knees, praying before the Blessed Sacrament.

And there we were left with them for some fifteen minutes. It was just enough time to bring me to my senses and make me realize how stupid had been my grandiose notions about doing ministry. This also helped me realize—and I’m sure it’s why Mother Teresa always made her guests wait for a period before the Blessed Sacrament before seeing them—that I had made an idol out of another person when, in fact, the real object of my devotion could only rightly be Jesus.

When we actually met Mother afterwards, I kissed her two wrinkled hands. She seemed older than her seventy-six years. But she radiated a certain aura, which made her craggy face and stooped frame seem almost beautiful.

"Be holy priests," were her words to us seminarians that day back in 1986. And she punctuated that advice with this warning: "Or pack up and get out now."

It has taken longer than many expected or desired, but Pope Francis is finally making concrete moves to reform and reshape the Roman Curia.

On Wednesday he officially decreed that four Vatican departments that deal with issues of justice and peace, migrants, Catholic charitable organizations, and health-care services will cease to exist on January 1 and be grouped together into a single mega-office.

The new entity will be called (at least for now) the Dicastery for Promoting Integral Human Development. Its inaugural prefect will be Cardinal Peter Turkson, currently president of one of the soon-to-be-defunct offices—the Pontifical Council for Justice and Peace. The statutes for the new dicastery indicate that the pope himself will be directly in charge, for the time being, of a section concerning refugees and migrants.

The announcement came just a day before the Dicastery for the Laity, the Family, and Life was to formally come into existence.

This office incorporates another two pontifical councils (for laity and family issues) and gives it greater supervision over the Pontifical Academy for Life and the Pontifical John Paul II Institute for Studies on Marriage and Family.

Pope Francis recently chose Kevin Farrell, the Irish-born Bishop of Dallas (Texas), as the prefect of this new super-office. And he named Archbishop Vincenzo Paglia, former head of the now-defunct Pontifical Council for the Family, president of the Pontifical Academy for Life and grand chancellor of the John Paul II institute.

Creating the two new configurations means the elimination of six of the eleven pontifical councils that have been functioning up to now. The councils that remain (again, at least for now) are concerned with promoting Christian Unity, interreligious dialogue, culture, the new evangelization, and the interpretation of legislative texts. But once the structure of the entire Roman Curia is completely overhauled, these too are likely to be merged or developed into other entities.

It’s possible that these dicasteries (a generic term for departments) will eventually be established as secretariats, similar to two other sectors at the Vatican—those concerned with economic and financial issues and those dealing eith communications and multi-media.

What’s still not clear, however, is the future designation of the older and more venerable departments—the nine so-called Roman (previously “sacred”) congregations and the three tribunals.

These latest two amalgamations and the men who have been chosen to lead them signal, once more, Pope Francis’s attempt to inculcate dialogue and cooperation with the secular world rather than culture-war conflict with it. His appointment of Monsignor Pierangelo Sequeri to head the John Paul II Institute for Studies on Marriage and Family is particularly significant.

The priest and professor is regarded as “one of Italy’s most intelligent, cultured and open theologians,” according one of his colleagues in the academic world.

Sequeri (under the direction of the moderate Archbishop Paglia) is charged with transforming and imbuing the Lateran University–based John Paul II Institute, as well as its branches around the world, with the teaching and spirit that underlies Francis’s latest apostolic exhortation on marriage, Amoris laetitia.

Up to now the institute has been directed by men with a reputation for being doctrinally conservative. For instance, Carl Anderson, head of the Knights of Columbus, is vice-president of its U.S. affiliate.

The new configurations leave Cardinal Stanislaw Rylko, former president of the now-defunct Pontifical Council for the Laity, as the only head of these suppressed offices without a job. It is strongly rumored that the pope will make the seventy-one-year-old Pole the next Archbishop of Krakow. He would replace Cardinal Stanislaw Dziwisz, the seventy-seven-year-old former secretary of John Paul II who has headed the archdiocese since June 2005, shortly after the Polish pope died.

And speaking of cardinals, the rumors grow stronger each day that Pope Francis will call the third consistory of his pontificate for sometime before or around the end of this current Year of Mercy.

The Jubilee’s closing liturgy takes place on November 20, the Feast of Christ the King, which is a little less than three months away.

While the pope’s only other two cardinal-creating ceremonies were held in the month of February (2014 and 2015), Benedict XVI held three of his five consistories in November and John Paul II had one that same month in 1994.

There are currently 111 cardinal-electors—men under the age eighty and thus eligible to vote in a conclave. That number drops to 107 by the end of November, giving Francis only thirteen slots to fill if he adheres to the 120 limit that Paul VI set.

At that point—barring any deaths—the Jesuit pope will have created 44 of the 120 electors. The other 76 in the majority will be cardinals created by Benedict (55) and John Paul (21).

Over the next two years only thirteen electors age out, one of them a Francis cardinal. By natural attrition and barring any deaths the tally will stand at 54 (Francis), 47 (Benedict) and 19 (John Paul).

Not until 2019, when a further ten reach the age of 80, will the 61 men the current pope has named cardinals be in the majority. Again, this is all predicated on natural attrition only.

But the more important question is whether or not Francis believes that having a numerical superiority among those casting votes at the next conclave is essential to ensuring the election of a successor who will carry forth the reforms he has begun.

If he does, it would be prudent to take bold steps now. The swiftest and most effective way to achieve that would be to increase the number of cardinal-electors to 140 or 150. That would give him an immediate majority of 64 or 74 voting members.

He could so on the Feast of Christ the King or the first Sunday of Advent, just a few weeks before celebrating his eightieth birthday.