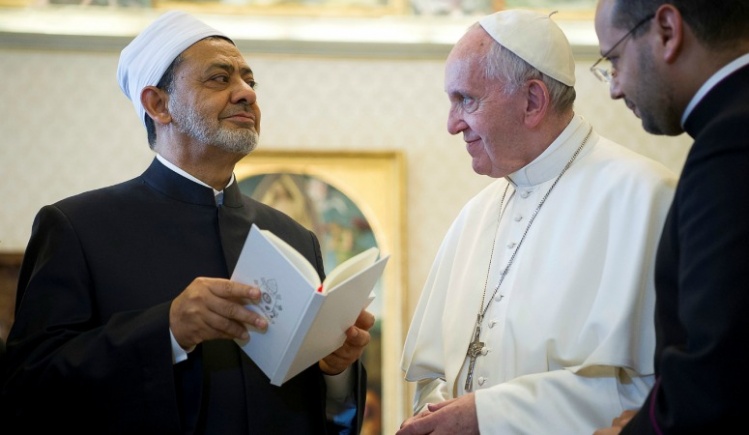 “Seek and strive after peace,” says a line in Psalm 34, a canticle that extols the blessedness reserved to those who place their complete trust in God.

And that would have been a perfect episcopal motto for Pope Francis, had he not already taken, long ago, miserando atque eligendo, a clunky phrase that basically expresses his belief that it was only through God’s mercy that God chose him to be a bishop. Nonetheless, “seek and strive after peace” (inquire pacem, et persequere eam) could still be used as an unofficial motto for his pontificate.

If you step back and survey Francis’s first three years in office you can see through so many of his initiatives and actions that he has tried to forge peace among broken families, bickering Catholic factions, divided Christians, folks of other religions and no religion at all, and even among rivaling world leaders and society figures.

But it is the manner in which he has tried to bring about peace in all these areas that is most striking and which marks a shift from the style of his most recent predecessor. Pope Francis has sought and pursued peace through encounter and dialogue.

The latest example came this past Monday when he held private talks with one the world’s most important Muslim clerics—Sheikh Ahmed el-Tayeb, the first-ever Grand Imam of Egypt’s prestigious Al-Azhar Mosque and University to come to the Vatican.

There was no such encounter and dialogue when Benedict XVI was pope. In fact, dialogue became a dirty word during his pontificate. The overarching concern was preaching and spreading the fullness of “truth,” which the former pope and his adoring retrodox disciples believed (or at least gave the very clear impression that they believed) could be found only in the Catholic Church.

Thus the desire to engage in real dialogue—that is, really listening to another viewpoint—was considered as being weak, as selling out the truth. No matter the consequences, Benedict believed truth trumped all else. Including human lives. Including peace.

Even after he abdicated the papacy in 2013 and promised to live “hidden from the world” in self-imposed silence and prayer, he spoke out a year-and-a-half later to warn again that the truth—specifically, the missionary spreading of the Catholic faith—was endangered by calls to dialogue.

“Many today ask, inside and outside the Church… is the mission still relevant? Would it not be more appropriate between religions to meet in dialogue together and serve the cause of peace in the world?” he said in an October 2014 talk that his private secretary, Archbishop Georg Gänswein, delivered for him at the Pontifical Urban University.

“The counter-question: can dialogue replace the mission? Today, in fact, many people have the idea that religions should respect each other and, in the dialogue between them, become a joint peacekeeping force… The question of truth, the one that originally moved the Christians more than anything else, here is put in parenthesis,” he said.

“This renunciation of the truth seems realistic and helpful for peace between world religions. And yet it is lethal to the faith.” That was Benedict’s conclusion. Pope Francis does not “renounce” truth, but puts it in a context of relationships with God and with others.

And, yes, he does so for the sake of peace—between world religions and between all people in the world.

The former pope’s personal secretary and housemate recently made the unbelievable claim that Benedict XVI never really abdicated the Petrine Ministry when he resigned, but merely chose to exercise it in a different way.

Speaking at the presentation of a new book on Benedict’s pontificate at the Pontifical Gregorian University in Rome May 20, Archbishop Gänswein also said that Pope Francis and Benedict are not two popes "in competition" with one another, but represent one "expanded" Petrine Office with "an active member" and a "contemplative."

What? First of all, let’s be clear. There is only one pope and his name is Francis. Secondly, Benedict XVI (Joseph Ratzinger) is a former pope who should more correctly be called Bishop-emeritus of Rome and not pope-emeritus. Only the Roman Pontiff is called “pope” in the Catholic Church and Benedict no longer holds this position.

Then there is the archbishop’s kooky syllogism that Benedict is somehow a  “contemplative” member of a two-man team that is currently occupying the Petrine Office. This is yet a further ultramontane exaggeration of the true nature of the papacy, which is Bishop of Rome.

When Pope Francis stresses the fact that he is Bishop of Rome it is not because this is the most humble of his titles, as some people continue to say incorrectly. No! It is the most important. Every other title flows from that, because Rome is considered the primary see that “presides in charity” over the Catholic Church. And its bishop, as successor of the Apostles Peter and Paul, enjoys special jurisdiction and historical prerogatives of governance over the worldwide flock.

Archbishop Gänswein’s theological musings seem to be part of a quiet campaign among devout Ratzingerites to stave off Benedict XVI’s increasing irrelevance. Why else would the cardinal prefect and entire staff of the Congregation for the Doctrine of the Faith make a recent pilgrimage to Joseph Ratzinger’s birthplace in Germany and celebrate Mass in his hometown?

Catholics of a more traditionalist stripe have been extremely critical of Pope Francis for what they perceive as his wishy-washy theology. He seems, to them, to be soft on doctrine. And that is putting it mildly.

On the other hand, many “progressive” Catholics and those Christians not in communion with the Roman Church actually like this seemingly non-doctrinaire aspect of the Jesuit pope. For them he is a breath of fresh air. Interestingly, Francis has been able to keep people with both points of view relatively happy. So what’s his secret?

It may be the “good cop-bad cop” scenario that, if not an explicit strategy, has certainly worked as an effective, de facto modus vivendi. Here’s how it seems to be working. Pope Francis plays the good cop, that character who is always the darling of the “trendy lefties,” the “anything goes” types and people who just don’t believe the rules are all that important.

And then he has kept in or appointed to key posts a number of “bad cops” who appeal to the doctrinal hardliners, rule-bound Catholics, and traditionalists. These include several cardinals like Robert Sarah (the Vatican’s liturgy chief who recently said the United States was fighting an “insidiously hostile” to Christians); Kurt Koch (the top ecumenical officer who believes Christians have the “duty” to convert all people to Christ except Jews); Gerhard Müller (the doctrinal czar and editor of the complete works of Joseph Ratzinger who just keeps on being Müller…); George Pell (head of the Secretariat for the Economy who is on the opposite side of the pope on just about every issue except, perhaps, finances); and the list goes on.

“Good cop-bad cop” must be the only logical reason Francis tolerates these and many others who are in direct service to him in Rome and yet seem to work against him in so many different ways. And if that’s not the reason, then what is?