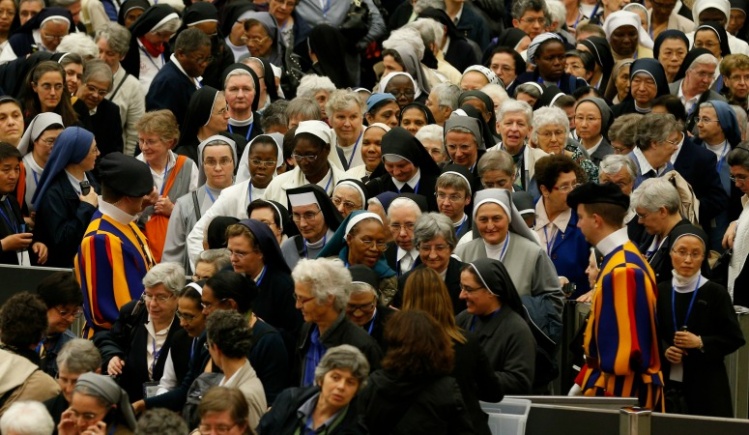 In a recent article, I argued that Pope Francis “has been all talk and no action” when it comes to advancing the full participation of women at the church’s leadership and decision-making levels.

“It’s time the pope remove the stained glass ceiling that, for too long, has deprived half the church’s population from fully sharing its hopes, wisdom, and talents,” I concluded.

Just six days after that article was published Francis effectively agreed with my assessment. “It’s true that women are excluded from decision-making processes in the church,” he admitted to some 900 heads of women’s religious orders around the world.

“Well, not excluded,” he continued, “but the insertion of women in decision-making processes is very weak. We must make advances.” The mothers superior—who had just begun a closed-door, question-and-answer session with the pope—were delighted.

And then, a few minutes later, Francis made some brief comments that would soon reverberate through cyberspace, provoking a flood of comments, articles, and debate similar to that which followed his now trademark statement, “Who am I to judge?”

What had he done? He agreed to one of the superior generals’ suggestions to create a commission that would “study the question” of women deacons or deaconesses, as we find in the New Testament. Immediately, all sorts of people put the cart before the horse and began making wild speculations.

He said he would form a commission to study the history of women deacons. He did not say he was in favor of ordaining them. In fact, he expressed his own perplexity over what exactly their role was in the past and how reinstituting them might lead to the clericalization of women.

But that did not stop some very bright and otherwise reliable pundits, who should know better, to leap so far ahead themselves (and the pope!) and begin speculating that Francis had just taken the initial steps towards ordaining “women priests!”

Obviously, there’s still a lot of confusion about the permanent diaconate—an ancient servant-leadership position that had largely fallen out of use but was revived at the Second Vatican Council (1962-65)—and how it differs from the transitional diaconate, the step before one becomes a presbyter (that is, a priest).

But that’s not to say Pope Francis has done nothing. As he so often does—he’s once again given papal permission for the people in his Church to start another process of discussion and discernment on an issue the hierarchy has generally shied away from or ignored.

Now it’s up to him to actually form the commission he’s promised.

Pope Francis told the women superiors general that “above all” he would like a commission to “clarify” the exact nature of the role women deacons held in the early Church. It’s an interesting idea, but one that has already been taken up. And not too long ago.

The International Theological Commission (ITC), a thirty-member study and advisory group under the auspices of the Congregation for the Doctrine of the Faith (CDF), pondered the question just as we moved into the new millennium. This high-level theological think-tank, which was set up by Paul VI after Vatican II, issued a lengthy document in 2002 called, “From the Diakonia of Christ to the Diakonia of the Apostles.” One chapter of this text looked specifically at women deacons in the early centuries of Christianity.

The document concluded that “the deaconesses mentioned in the tradition of the ancient Church… were not purely and simply equivalent to the deacons” (i.e. the men). It also stressed that there is “the clear distinction between the ministries of the bishop and the priests on the one hand and the diaconal ministry on the other.”

After providing its “historical-theological research” the ITC text said it was now up to “the ministry of discernment which the Lord established in his Church to pronounce authoritatively on this question.”

Here’s how the ITC works: under the presidency of the CDF prefect, theologians and scripture scholars serve for at least one five-year period (or quinquennium); sometimes they are renewed. And during their term they usual focus, as a body, on one or two “doctrinal questions of major importance.”

The group that undertook the study of the diaconate—the Sixth Quinquennium (1997-2002)—was led by Cardinal Joseph Ratzinger, then head of the CDF, and included some people who are lot more famous today than they were two decades ago.

Two of them have gone on to become cardinals (Luis Tagle of the Philippines and Willem Eijk of the Netherlands) and two others are now archbishops who have had significant positions at the Vatican (Jean-Louis Bruguès, O.P., a Frenchman who heads the Vatican Library; and Bruno Forte, an Italian who was secretary at the last two Synod assemblies on the family).

Another—Archbishop Roland Minnerath of Dijon (France)—is currently a member of the CDF. Not so surprisingly, there was not a single woman among the members, although the ITC homepage erroneously has “Mrs.” before the name of Gösta Hallonsten, a male professor from Sweden.

Interestingly, when he was speaking to the mothers superior about women deacons, the pope said: “I think I’ll ask the Congregation for the Doctrine of the Faith to tell me if there are some studies on this issue.”

Is it possible that he knew nothing about the ITC document from 2002 or that the men who are now running the CDF were directly involved in its genesis? It’s more likely that he knows all this very well, but thinks the issue needs to be looked at and studied again.

This is not the first time the Jesuit pope has reopened a question many thought had been closed. In Evangelii Gaudium, the blueprint for his pontificate, Francis says the doctrinal authority of episcopal conferences “has not yet been sufficiently elaborated.”

That would be news to Pope John Paul II who intended to resolve the issue in 1998 with a “motu proprio” called Apostolos Suos, a document that emasculated the bishops’ conferences.

Pope Francis surely knows about this text and the ITC paper on deacons—both issued when he was still Archbishop of Buenos Aires.

Or is it possible that they got lost in the Argentine postal system?

The Catholic bishops conference in Italy fought tooth and nail to make sure it did not happen. But it was all in vain. Last Wednesday the lower house of the country’s democratically elected parliament voted 369-193 to legalize same-sex civil unions. The Italian Senate had already approved the measure in February.

The Bel Paese was the last country in Western Europe that did not offer even minimal recognition or protection under law for gays and lesbians in committed partnerships.The new legislation gives same-sex couples the right to have the same last name, draw on their partner's pension when they die, and inherit each other's assets in the same way as married couples.

But activists that have been fighting for civil unions, and especially those who continue to call for gay marriage, say the new law is far from satisfactory. They are upset that Italian Prime Minister Matteo Renzi watered down the original bill to appease conservative members of parliament who closely follow the bishops’ directives.

One of their biggest complaints is that a so-called “stepchild adoption” clause, which would have allowed people in civil unions to adopt the biological child of their partner, is not in the new law. Family court judges will decide on a case-by-case basis.

To the chagrin of Italy’s bishops, though, it is clear that a majority of people in the country are in favor of same-sex civil unions. But Archbishop Michele Pennisi of Monreale (Sicily) said that was not true.

“There is a big slice of the country that does not want this law,” he told the Rome-based daily, La Reppublica. He said the way the Prime Minister linked the law’s passage to a vote of confidence on his government was an instance of “creeping fascism.”

The secretary general and the man Pope Francis made the de facto head of the of the Italian bishops’ conference, Bishop Nunzio Galantino, said the way the new law was passed was “a loss for everybody.” More strident bishops were fiercer in their criticism.

That should surprise no one. The Italian hierarchy, which presides over a Church where every honest person knows a large percentage of the clergy are homosexually-oriented men, has done everything to perpetuate their country’s longstanding hypocrisy regarding gay people.

Thanks to their efforts, especially to enforce deeply conservative views on family life in Italian society, many people in this country have been trapped into leading double lives. They get married, have children and some—some—secretly find sexual intimacy or a relationship with other people of their same sex. Or they join the “celibate” priesthood and do the same.

Italy’s new law has opened the door to a more honest conversation in a changing society. And hopefully it marks the beginning of the end of one of the great Italian hypocrisies