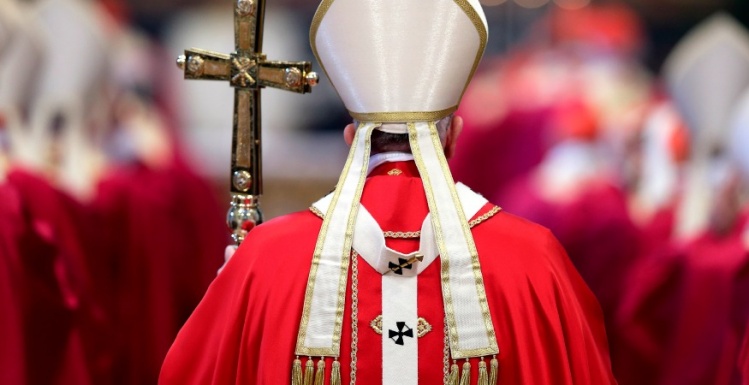 Pope Francis returns to his Cathedral of St. John Lateran next Monday, the same day that Catholics around the globe celebrate the liturgical feast of its dedication. He is is going for a very specific reason—to personally ordain Msgr. Angelo de Donatis an auxiliary bishop for the Diocese of Rome. Apparently he will become the first pope since John XXIII to preside at an episcopal ordination at the Lateran.

His post-Vatican II predecessors routinely ordained new bishops in St. Peter’s Basilica at the Vatican. John Paul II laid hands on more than 320 new hierarchs during his long reign and Benedict XVI consecrated twenty-three in his nearly eight years on the Chair of Peter. This is only the fifth such ordination for Francis. But it is extremely significant that he’s actually doing it in his cathedral at the Lateran, known as the oldest church in Christendom.

The emperor Constantine built the original basilica in the fourth century when St. Sylvester I (315-345) was pope. But Vandals sacked the church about a hundred years later and it suffered yet more damage through an earthquake and major fires in subsequent centuries. Most of the building that exists today dates from the seventeenth century and is adorned, like much else in the Eternal City, in the baroque style.

Carved into its magnificent façade, just under the bold statue of a triumphant Christ embracing the Cross, is a Latin inscription that hints at its official title, which is the Archbasilica of the Most Holy Savior and Saints John the Baptist and Evangelist at the Lateran. At the base of each of the two massive columns flanking the main entrance is another inscription —Sacros. Lateran. Eccles./Omnium Urbis et Orbis Ecclesiarum Mater et Caput. This tells visitors the Lateran Basilica is the “mother and head” of all the churches in the city and the world.

Not only has it remained the pope’s cathedral, but for nearly a thousand years after its construction it was also the residence and administrative headquarters of the Bishop of Rome.

That ended in 1309 when Pope Clement V and his curia moved to France, beginning the nearly 70-year Avignon Papacy, or the “Babylonian captivity" of the popes. It was only after the papacy returned permanently to Rome that the Vatican and St. Peter’s Basilica became increasingly more prominent. But it doesn’t have to stay that way. History shows that, even in the Catholic Church, not everything lasts forever.

That is good news for Pope Francis as he faces the uphill battle of trying to sort out the huge financial and bureaucratic mess in which the Vatican has been embroiled for many decades (or, yes, centuries).

Two new books due to be published in Italy this week promise to offer even more ugly details of the current state of financial corruption and curia infighting. They are supposedly based on documents that Vatican insiders leaked to the authors.

In fact, last weekend two people—a Spanish priest associated with Opus Dei and an Italian lawyer and public relations specialist—were arrested as the suspected culprits. They had worked on a study commission Francis set up in 2013 to help evaluate how to precede with financial and organizational reforms.

If the new books provide even a shred of evidence that the clean-up efforts are failing, then people will be left scratching their heads and wondering if cynics are right in saying the Roman Curia and the Vatican are simply “irreformable.”

Even though the pope will turn seventy-nine next month, he is one tough customer, and not one likely to shrink before the task in front of him. Nevertheless, at a certain point he must wonder when it should be time to turn the whole financial bureaucratic operation over to someone else so he can get on with the real business at hand: reforming the institution of the papacy and the pastoral governing structure of the universal church.

History may provide a way through the mess. Who says the Bishop of Rome has to continue being C.E.O. of a tiny state in the middle of the Eternal City? It is not, in any way, essential to his office, ministry or even his institutional charism.

Quite the contrary. It is well documented that Pope John XXIII, who was a church historian, seriously contemplated the possibility of leaving the Vatican and moving into the more ancient papal residence next to Rome’s Cathedral of St John Lateran.

Francis, whose saintly patron from Assisi is honored with a prominent statue at the far end of the vast square extending from the cathedral, could fulfill Papa Giovanni’s dream. He’s unquestionably traditional enough to do so; certainly more steeped in the tradition than his neo-Tridentinist critics who believe everything was definitively formulated and fixed forever in the sixteenth century.

The Order of Preachers, more commonly known as the Dominicans, is about to mark a big Jubilee. The white-robed friars, nuns, sisters and lay members of the “Dominican Family” next Saturday will begin a yearlong series of events to celebrate the 800-year anniversary of the famed order’s foundation.

There will be much more to say about the Dominican Jubilee in the coming weeks and months. But, for now, it’s especially interesting to note that on Tuesday, just days before the celebrations were to get underway, Pope Francis picked a former worldwide superior of the Dominicans to be a bishop.

He named fellow Buenos Aires native, Fr. Carlos Azpiroz Costa, to be coadjutor archbishop of the mid-sized metropolitan see of Bahía Blanca, some 340 miles south of their hometown.

The extremely personable and gregarious 59-year-old was Master of the Order (as the Dominican “general” is properly called) from 2001-2010.

He had returned to Rome in 1997—after studying there several years earlier—to be the Dominicans’ procurator general, rector of its fifth century minor basilica of Santa Sabina and canon law professor at its Pontifical University of St. Thomas Aquinas (the “Angelicum”).

“Frey Carlos” is the first Master of the order since 1962 to be made a bishop. That’s when Pope John XXIII selected the still-Father Michael Browne to be a cardinal. In fact, the now-sainted pope personally ordained the extremely conservative Dominican and eleven others to the episcopate at St. John Lateran.

Currently, there is only one other former head of the Dominicans who is still living. And, unfortunately, he is not a bishop or a major player in the Vatican. He’s Fr. Timothy Radcliffe, who led the order from 1992-2001. Pope Francis esteems the Englishman and skilled Francophone, and has even called him to Rome for conversations. But Fr. Timothy recently turned seventy and it’s probably too late for him to be added to the ranks of our mitered birdbrains (to quote the late Fr. Andrew Greeley).

But, then again, in the Church of Francis just about anything is possible.