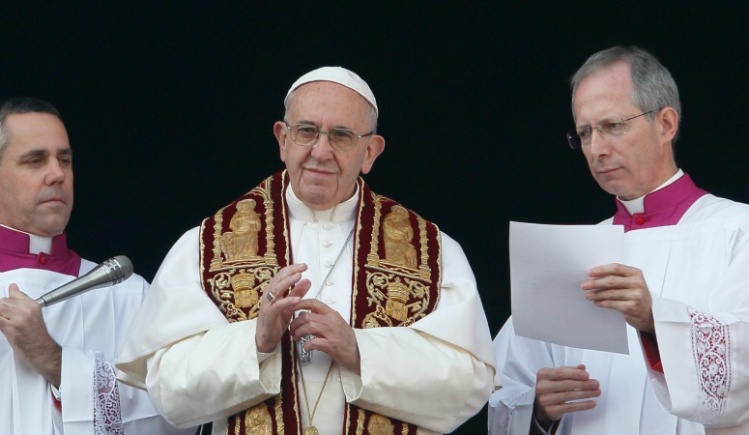 He’s closing in on the fourth anniversary of his election as Bishop of Rome.

And, yet, Pope Francis has frustrated many so-called “reform-minded” Catholics by making only relatively few structural changes up to now—both in the church at large and at the Vatican. That’s despite taking up the papal office with a broad mandate to reform the church’s central bureaucracy, known as the Roman Curia.

Those who have been disappointed up to now should take heart. And the obstructionists who think they’ve successfully stymied his reforms should start to worry.

History’s first Jesuit pope, who only last week hit the august age of 80, made it crystal clear on Thursday that he’s got plenty of gas left in his tank. And in an annual Christmas address to top Vatican officials, he signaled that he’s willing to spend some of it to streamline, modernize, and bring to heel a curial apparatus that has often overstepped its limits and treaded on the rightful authority of individual bishops and national episcopal conferences.

But before getting into the nitty-gritty, Francis prefaced his talk with a brief reflection on the meaning of the upcoming celebration of the Nativity of Jesus.

“Christmas is the feast of the loving humility of God,” he said.

Then he offered the first of several quotes from Paul VI, the pope who oversaw the church reforms stemming from the Second Vatican Council (1962-1965) despite stiff opposition by some—including a number of curia officials.

“There was on God’s part an effort to plunge himself, sink himself into us, so that each of us—I say each of you… might have intimacy (with Him), might draw close to him, might feel thought of by Him and loved by Him,” Francis said, citing a homily the late Italian pope gave at Christmas in 1971.

Then he added his own commentary, saying, “God chose to be born small because he wanted to be loved. This is how the logic of Christmas is the turning upside down of worldly logic, the logic of power, the logic of command, the pharisaic logic, and the casuistic or deterministic logic.”

This logic of the loving God who makes himself small is what the pope wants to be at the heart of Church renewal—from the papacy, to the Vatican and the church throughout the world.

But on Thursday he focused specifically on reforming the Roman Curia.

Francis, a Vatican outsider who never worked or studied in Rome, told cardinals and bishops (and a handful of laity) that his ongoing curia reform would be more than mere face-lifting or a matter of bringing in new blood (that is, changing personnel).

Instead, he promised it would include the “eventual suppression of offices that no longer respond to the current needs” and the combining of or “reduction of commission, academies, committees, etc.” in order to reflect an “indispensable sobriety that is necessary for a proper and authentic witness” of Gospel service.

Many of the cardinals sat stone-faced and looked nervous as the pope stood before them in the “splendid Clementine Hall”—as Cardinal Angelo Sodano, the dean of the College of Cardinals, put it.

Francis said reducing the number of offices “would allow more individual prefects (office heads) to have more frequent and systematic meetings with the pope and efficient meetings between dicastery heads, seeing that they cannot be such with too large a group.”

Then he spelled out twelve guiding principles of his reform.

Under the principle of subsidiarity, Pope Francis said upcoming changes would include “rearranging the specific competencies of the various dicasteries (bureaus)” and would likely mean “moving them, if necessary, from one dicastery to another.”

He said the Secretariat of State would be at his “direct and immediate” service and once again have the power of coordinating the curia’s work, as Paul VI had designed it to do so after Vatican II.

Francis also promised to make the curia’s work more “synodal” by presiding over more frequent and “regular meetings of dicastery heads”. And he said he would mandate that the individual dicasteries also hold continual coordinating meetings that include their entire staff and members, given that some – such as the Congregation for Divine Worship (CDW) – are notorious for lacking such sessions.

The pope’s reform-minded critics have lamented the fact that he has not replaced more officials—such as the CDW prefect, Cardinal Robert Sarah, among others—who seem to be opposed to the direction in which he’s trying to move the Church.

But Francis said personnel changes would be useless unless the mentality inside the Vatican changed. Surely, the structural alterations he has in mind will be conducive to creating an overall attitude of humble, simple and truly pastoral service among curia officials.

“The work of all in the curia must be animated by a pastoral sense and a spirituality of service and communion, because this is the antidote to the poison of vain ambition and illusory rivalry,” the pope said.

He then repeated a warning that Paul VI issued only three months after his election to the papacy and just a week before he re-convened Vatican Council II for its second session:

The Roman Curia is not to be a bureaucracy, as some have wrongly judged it – pretentious and apathetic, merely canonistic and ritualistic, a gymnasium of hidden ambitions and veiled competitiveness, as other accuse it; but it is to be a true community of faith and charity, of prayer and action; of the pope’s brothers and sons (sic.) who, with respect to their separate competencies and with a sense of collaboration, do everything to serve him in his ministry of service to his brothers and children of the universal Church and all the earth.  (Paul VI to the Roman Curia, 21 September 1963)

Amazingly, Pope Francis never once uttered the word “clericalism” in his Christmas talk to curia officials, something he has consistently railed against throughout his pontificate. However, he implicitly stated that another guiding principle for his curial reform, “catholicity,” would be of prime importance in excising clericalism. And that includes bringing more lay people—including more women—to work in the Vatican’s central offices.

“Among the collaborators, in addition to priests and consecrated persons, the curia must mirror the catholicity of the Church by hiring people coming from the entire world, permanent deacons, and lay faithful, whose selection must be attentively made on the basis of their exemplary spiritual and moral life and their professional competence,” he said.

“Of great importance is the enhancement of the role of women and the laity in the life of the Church and their integration into leading roles in dicasteries, with a particular attention towards multiculturalism,” he added.

Pope Francis still has a long way to go before he is able to bring forth these reforms. But he looks every bit determined to get there.

He also has no illusions about the opposition he’s facing.

“It’s normal, even healthy, to come up against difficulties, that, in the case of reform, one could describe as different types of resistance,” he said.

The pope noted that there was a type of “open resistance,” often born of “good will and sincere dialogue.” On the other hand, there’s also a “hidden resistance” that is waged by those with “fearful hearts” who say they are in favor of the reform but then try to keep things from changing.

And then there is what Francis calls a “malicious (or malevolent) resistance” to reform that “germinates in distorted minds” and is the fruit of “bad intentions.”

“This last type of resistance is hidden behind justifying words and, in many cases, accusations (that) take refuge in traditions, appearances, and formalities…” the pope said.

He claimed not to be overly concerned by those who continue to resist his reforms. In fact, he said it would actually be “a sign of death” if some people did not react in this way.

“Therefore, good (attitudes of) resistance—and even those less good—are necessary and should be listened to, accepted, and encouraged to be expressed, because it is a sign that the body (of the Church) is alive,” he stressed.

Pope Francis knows very well that reforms do not come quickly and that it will take time before words and intentions align with real action.

An anecdote puts the situation starkly in perspective.

The pope began his address on Thursday with the usual, “Dear brothers and sisters”; very odd, since there appeared to be only men in the room.

And then when he personally greeted those present at the end of the gathering, they filed up to him, one-by-one, according to their rank—cardinals first, then archbishops, bishops, priests, and laymen.
And, of course, there was not a woman among them.