The Art of Medieval Time
By Griffin Oleynick
Arts
Spirituality 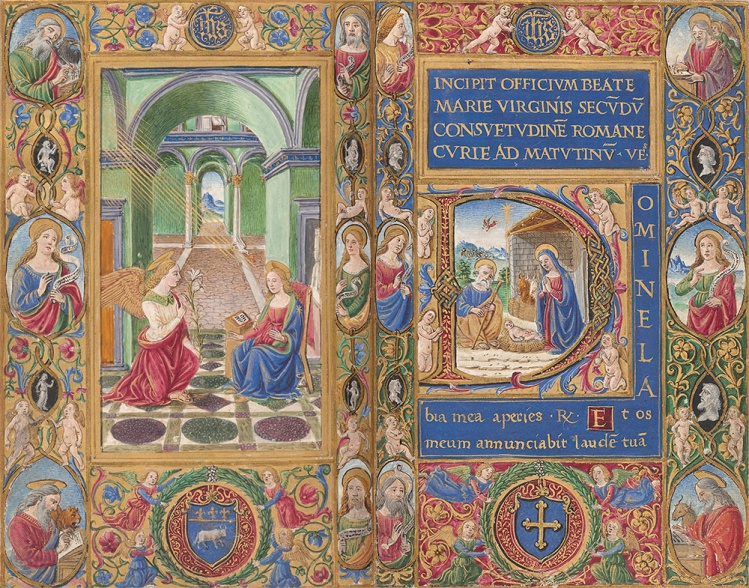 Part of a visual pilgrimage toward Easter, this piece is the first in a series of spiritual meditations by Griffin Oleynick, who will visit a different art gallery each week through the season of Lent. Check back February 25 for the next installment, when Griffin visits the Whitney Museum.

Now and Forever: The Art of Medieval Time, on view at The Morgan Library and Museum, New York City, January 26 through April 29, 2018

The arrival of Lent alerts us that something is about to change. The short, somber days of winter give way to the color and extended sunlight of spring, as the liturgy begins to incorporate dramatic new symbols like ashes, palms, and burning candles. The most medieval of the seasons of the Church’s liturgical year, Lent is a time of prayer and spiritual growth, when we are called, through practices like lectio divina (the meditative way of reading scripture formalized by monks in the middle ages) to cultivate a heightened awareness of God’s presence in our lives. Steeped in so much natural and liturgical beauty, we may indeed find ourselves drawn to yet another way of experiencing God that flourished in the middle ages: visio divina, or divine seeing, a method of contemplative prayer in which the shapes, colors, and patterns of visual art become the starting point for the journey of the soul as it rises to God.

Now and Forever: The Art of Medieval Time, a new exhibition on view through the end of April 2018 at the Morgan Library and Museum in New York City, happily coincides with the beginning of Lent and presents a stunning range of richly decorated, thought-provoking objects, many of which were originally created to serve as visual aids to prayer. Organized into four sections addressing different aspects of the medieval concept of time (the medieval calendar, liturgical time, historical time, and time beyond time, or the afterlife) and capped by the display of a monumental wooden astrolabe from the monastery of San Zeno in Verona, Italy, the exhibit not only draws out the suggestive similarities and stark differences between the middle ages and our own modern era, but also gives us the tools to enter knowingly into the sacralized consciousness of the medieval worldview. Lavishly illuminated calendars, lectionaries, choir books, bibles, chronicles, scrolls, books of hours, and even a few papal indulgences, drawn from all across medieval Europe, invite us to slow down, to pause and ponder during these weeks of Lent, as we listen prayerfully for the still-small voice that even today invites us into renewed relationship.

Now and Forever present a different, and more accurate, vision of the middle ages than the one we’re familiar with. The centuries between the collapse of the Roman Empire and the flowering of the Renaissance were hardly a culturally “dark” and intellectually ignorant time, concerned merely with matters of faith and uninterested in the workings of the secular world. Instead, the exhibit demonstrates the high level of sophistication attained by the medievals, especially in their complex methods for measuring and regulating time. The medieval calendar itself, displayed in the first section of the exhibit, appears as an elaborate two-dimensional matrix, a reproducible grid whose coordinates track the days, weeks, and months (along with their corresponding feasts and religious celebrations) just as they record the phases of the moon, the position of the sun, and the motions of the stars.

A singularly striking feature of the medieval calendar is the recurring juxtaposition of two cycles of images keyed to the months of the year: the Labors of the Months and the Signs of the Zodiac. These illustrations each depict a different form of fruitful human activity situated prominently on the page beside a corresponding constellation. We thus observe small, delicately rendered workers threshing wheat in August, harvesting grapes in September, and feeding pigs in November, alongside the signs of Virgo, Libra, and Sagittarius. The implication is that time itself creates a kind of enduring relationship between two disparate categories of events: the small, habitual occupations of human life on the one hand, and the wondrous motions of the vast celestial bodies on the other. 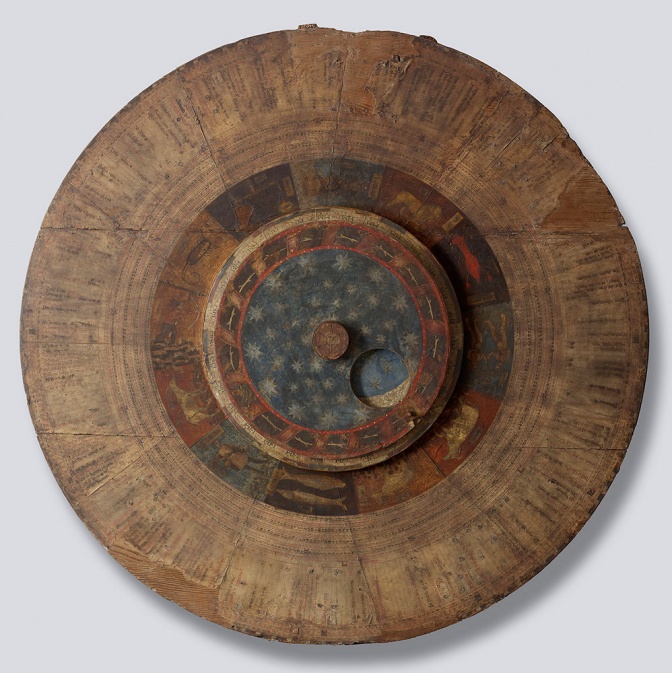 This pairing of ordinary human labor with the dynamic unfolding of the entire cosmos is as humbling as it is inspiring. Our lives, though small, are neither insignificant nor unimportant: indeed they matter greatly, because their ups and downs, their twists and turns are stitched with care into the immense tapestry of a universe created by a loving God. In Psalm 8, the psalmist joyfully adopts this same perspective: “When I look at your heavens, the work of your fingers / the moon and the stars that you have established; / what are human beings that you are mindful of them / mortals that you care for them? / Yet you have made them a little lower than God, / and crowned them with glory and honor.” The medieval calendar does not, like our modern smartphones and Fitbits, present itself as a tool for extending our dominion over time to magnify and maximize our own capacities. Its purpose is rather to orient us to the rhythms of a larger world beyond ourselves, one that is always changing and unfolding, and to help us to find our own particular place within it.

Just as the medieval calendar encouraged users to view their lives as connected elements within a much larger whole, so too did a popular genre of medieval historical writing known as the “universal chronicle,” featured in Now and Forever’s third section. Such works, like the retired-knight-turned-historian Jean de Courcy’s imaginative Bouquechardière, attempted to weave the many disparate strands of human history, from the creation of the world right up through the present day, into one single, organic story. In these accounts we not only find figures from sacred history like Adam and Eve, Abraham and Isaac, King David and Jesus Christ, but also classical figures from Greek and Roman history such as Aeneas and Dido, Alexander the Great, and Julius Caesar. These are all joined by medieval characters from French history like Charlemagne and King Louis XI. The otherwise confusing set of historical relations that link them across several millennia is ingeniously mapped out visually, as lines, roundels, and written captions run together along continuous scrolls of parchment.

One of these scrolls, the fifteenth-century Chronique anonyme universelle monumentally displayed at the center of the exhibition, covers more than six thousand years of recorded history and is more than sixty feet long. Here several parallel genealogies gradually merge as new civilizations rise upon the ruins of the old, a tendency towards social integration and civic renewal that challenges our own divided political thinking today. Are we capable, like the medievals, of imagining ways in which our separate political narratives eventually flow together into one? Can we likewise find enough hope to believe that the destruction and devastation we are currently witnessing might in fact prepare a radically new way of living?

All scrolls, however happily or tragically they unwind, eventually come to an end. What then? What lies beyond the end of time? The penultimate section of the exhibit reveals that, in contrast to our modern prioritization of the present moment, the medievals reserved their most vital imaginative energies for their visionary depictions of life after death. Multiple books of hours, those common devotional aids used by clergy and laity alike as a way of connecting to God at specific times throughout the day, are here opened to the Office of the Dead — special prayers that were intended to hasten the progress of souls through purgatory. Death is depicted visually in its grim, egalitarian reality: as the end of life arrives for figures of all social ranks, we see priests and religious performing last rites in bedchambers and burials in graveyards, the latter replete with white bones scattered atop the freshly dug earth. And the depictions of the three kingdoms of the afterlife are no less vivid: winged demons, iron chains, and monstrous, fanged mouths gnawing sinners form the landscape of hell, while purgatory rises up with its temporary, cleansing fires. Above it all, the court of heaven shines brilliantly, with exquisite renderings of God as Trinity, the saints, and the angels taking their seats against elaborate backgrounds of gold leaf and lapis lazuli.

The medieval calendar does not, like our modern smartphones and Fitbits, present itself as a tool for extending our dominion over time
sharetweet

Such dramatic illuminations help us to realize the seriousness with which the medievals approached their time on Earth. Life in time was not simply a kind of dress rehearsal for the life beyond, but rather the very stage on which eternity was paradoxically brought into being. It is here that human freedom achieves its greatest dignity: our eternal status, as Dante was keen to point out in the Divine Comedy, results from the choices we make in time, which God ratifies forever. How we will be then bears a direct relationship to what we do now. This is the good news that Christ preached in the Gospels: at every moment, we are free to choose. Our task is to recognize the signs of the times, to seize the moment as the Kingdom of God draws near.

At no other point in the Christian liturgical year do we feel our own embeddedness in time, along with time’s dangers and possibilities, more acutely than during Lent, the season of repentance, conversion, and hope. As we undertake the long journey from Ash Wednesday to Easter Sunday, the unspeakable, eternal joy of Christ’s resurrection communicates itself to us through the idiosyncratic, ever-changing times and spaces of our lives. One final image from the exhibit, a full-page illumination in a sixteenth-century Dutch breviary, poignantly captures this sense of Lent as the time when the abiding abundance of God’s grace most dramatically burns away the temporary pain and sadness of human sin. In the foreground we see a huddled crowd of naked souls, knees bent and arms folded in prayer. In unison, they gaze up with gladness as three of their number are lifted gently by two angels, who bear them up to God. Forgetting the flames burning around them, their placid faces, with soft eyes fixed upon their future home in heaven, radiate a sense of serenity and peace. They are models for us all as we make our own pilgrimages this Lent: though we might feel the flames for a little while, we know that in the end, because of Christ’s saving love, we shall not be burned.