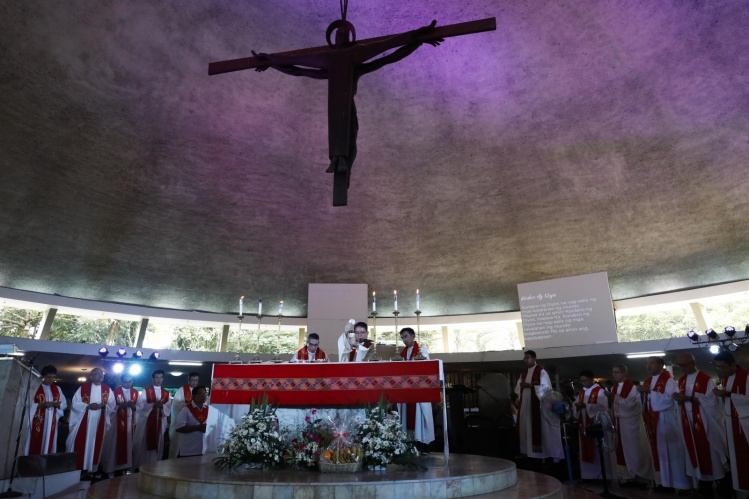 Their experience in taking on “fake news” is instructive and, it seems, their outspoken response contrasts with that of the U.S. Catholic bishops, who have been mostly tepid on the subject.

The Philippine bishops spoke out in the poisonous context of Duterte’s backing for a massive campaign to murder suspected drug dealers, which has resulted in thousands of extrajudicial slayings. It’s hard to see how the bishops could ignore this, and yet their opposition to the mass of murders led quickly to charges from Duterte and major newspapers that they were being too political. It’s a charge that sticks easily to the Philippine bishops because they have in fact been major political players, whether in helping to topple Ferdinand Marcos and his kleptocracy in the 1980s or in their long but unsuccessful attempt to preserve a law that barred artificial contraceptives.

The extrajudicial killings and other Duterte policies were supported in social media by the now-familiar fabrication of “news” that is either totally false or deliberately misleading propaganda. Critics of Duterte face email inboxes filled with threats and hostile “socialmedicide” campaigns.

The Catholic Bishops Conference of the Philippines responded last June with the pastoral letter Consecrate Them in the Truth. “A fact is anything that is or that happens,” the bishops declared. “If one man kills another, it cannot but be a fact that the deed was done, and any ‘alternative fact’ that would have it so that no killing was done is simply false, and, when meant to deceive, a lie!”

The bishops described “fake news” as “a sin against charity,” and said that the Catholic faith requires Catholics not to patronize or recirculate it, and to “rebut and refute falsehood whenever they are in possession of facts and of data.” Earlier, they had published “Pastoral Guidelines on the Use of Social Media,” which included an appendix listing 29 websites “carrying fake or unverified contents.” The sites were pro-Duterte; some also touted Donald Trump.

One can argue about the choices made; a few sites say they’re just offering opinion, not phony facts. Other sites shut down. At least the bishops’ statement is a serious attempt to define “fake news,” a term Trump has turned into an all-purpose putdown for news reports he doesn’t like.

U.S. bishops have been much slower to respond publicly to the xenophobic alt-right media, including extremist sites that claim the banner of Catholic orthodoxy to justify an online Inquisition that revels in gay-baiting, anti-Muslim polemics, and mean-spirited personal attacks. The bishops’ strategy seems to be based on the assumption that paying attention only encourages the propagandists—and it may also reflect a fear of the same consequences that the Philippine bishops have faced for confronting Duterte and his online allies.

The bishops described “fake news” as “a sin against charity”
sharetweet

Duterte has been effective in marginalizing his country’s bishops, even though most Filipinos are Catholic and many are devout. He claims that a Catholic priest sexually abused him when he was a boy—and clergy sexual abuse is indeed a problem in the Philippines, as in many other countries. Any church push against the vigilante slayings meets the response, spread in social media, that the bishops protected pedophiles. Duterte also has campaigned for greater access to artificial contraceptives, a popular cause that the bishops have used their political clout to oppose. He maintained the election campaign offered a choice between himself and the Catholic Church—so his victory sent a clear and hostile message to church leaders.

Having been battered by Duterte on the way to his May 9, 2016 victory in the presidential campaign, the Philippine bishops were initially slow to respond to the extrajudicial murders that followed the election and drew public support. “It was not until mid-September 2016—two and a half months after Duterte took office and after almost 3,000 people had been killed in his ‘war on drugs’—that the Catholic Bishops’ Conference of the Philippines issued its first statement against extrajudicial killings,” according to a study in the Journal of Current Southeast Asian Affairs by Mark R. Thompson of City College of Hong Kong.

Miguel Syjuco, a novelist, professor at NYU-Abu Dhabi and journalist who writes on the Philippines, said in a telephone interview that Archbishop Socrates Villegas, who leads the bishops’ conference, was hesitant at first and “quite in the middle.”

But in the meantime, he said, a movement grew in parishes as local priests and their congregations helped families of those slain, documented crime scenes, arranged rehabilitation for drug addicts (thus saving them from being targeted) and provided sanctuary for people being hunted. The Philippines church’s strength in the civic arena is in “the trust that people still have in the priests” and religious in their parishes, Syjuco said.

The Redemptorist order’s Baclaran Church, formally known as the National Shrine of Our Mother of Perpetual Help in metro Manila, is a prime example of the noteworthy role the church plays at the parish level. Brother Jun Santiago, who is based there, has documented the slayings with crime-scene photographs that the parish displayed in a public exhibit.

“I believe it was really the joint efforts of the parishes that led bishops to take a stand,” Syjuco said.

It is a brave, if somewhat delayed, stand against a good deal of public opinion and the ruthless Duterte. Once they made that stand, the bishops quickly saw how manipulation of social media had helped to build public support for the summary slaying of drug dealers, who had not been a major national concern in the years before Duterte rose to power.  Their “pastoral exhortation” followed.

“‘Alternative facts’ and ‘fake news’ engender faulty decisions many times with disastrous long-term consequences to persons and to communities.  Sadly, we see this happening today,” the bishops wrote. “There are persons who have given themselves to the service of reporting what never happened, concealing what really happened, and distorting what should be presented in a straightforward manner.”