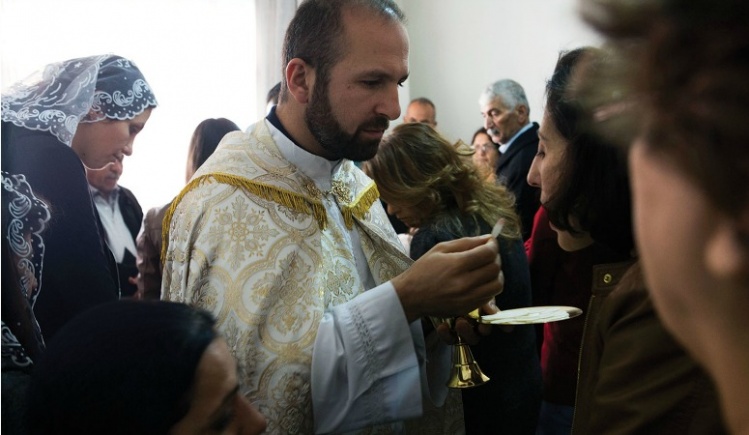 A small church in the heart of Istanbul is a sanctuary for Iraqi Christians on their way to somewhere else. Just a short walk from Taksim Square, near the sites of several recent terrorist attacks, it offers refuge for those who’ve fled persecution by ISIS and are seeking asylum in places like Canada, Australia, and Europe. But even while the Church of the Covenant of the Sacred Heart serves as a haven, Turkey itself can be hard on those forced to make the country their temporary home.

“Turkey is a waiting room if you are an asylum seeker,” says Aykan Erdemir, a senior fellow at the Foundation for Defense of Democracies and a former member of the Turkish parliament. Refugees “realize that Turkey is not a multicultural society where ethnic, religious, and societal differences are accommodated, so they will always be second- or third-class citizens.”

Iraqi Christians who arrive in Turkey can receive U.N. visas allowing them to stay for two to ten years while applying for asylum elsewhere. But in this transitional state, they find it difficult to assimilate into Turkish society. They cannot speak the language; they’re forced to take the hardest and lowest-paying work. Many have left family behind in Iraq—relatives whowon’t be able to get out now that Turkey has closed its borders.

“Yes, we feel welcome here,” says Zuhur Garabat, a mother of two from Baghdad who is hoping to move to Australia. “But there is no help for us.” She is drinking tea in the basement of the Church of the Covenant of the Sacred Heart after Mass. She has been in Istanbul for four years and has been waiting for her visa for two years. Her daughter, now nineteen, stopped attending school in Iraq in seventh grade and works in a textile workshop in Istanbul. Syrian Christian refugees, Garabat says, have received more help than those from Iraq.

Garabat’s friend Juana, a thirty-one-year-old mother of four from Dahuk in the Kurdish-controlled region of Iraq, sits next to her. She says she cannot afford to send her children to school. Her husband works at a clothing store, a job that does not provide enough money for the family. Juana waited more than eighteen months to receive a letter from the Australian Migrant Review Board requesting an interview for her visa; she must wait at least another seven months to have that interview. “I wish we could leave,” she says. “The future of my children is lost here in Turkey.”

The Mass the women attend at Sacred Heart is said in Arabic and Aramaic; it is the Chaldean Mass, one of the oldest in the world, written by St. Jude. The church itself is part-Turkish, part-Arabic, its interior painted white with light blue accents. A mosaic of Christ, embellished in gold, is at the altar. Abouna Orhan, a priest at Sacred Heart, works to ensure his parishioners feel welcome. “When tragedy happens, that is when people turn to God,” he says. “So I help people do that.”

Orhan understands the plight of those who come to his church. “Iraqis are very transient here,” he says. “They want to leave because there are mostly Muslims in this country, and they want to go where they have their families and a community to support them.” Indeed, as of 2010, Christians accounted for only 0.3 percent of the Turkish population, according to a report from the Harvard Journal of Middle Eastern Politics and Policy. Further, in the aftermath of the failed coup in 2016, Christians are increasingly the target of hate crimes and hate speech, even though the minority Christian community has spoken out against the attempted overthrow. Erdemir blames government-run media for helping inflame the situation with reports such as those stating that Fettullah Gulen, the alleged leader of the plot, is a member of the Catholic clergy.

Regardless of the political volatility in Turkey, Iraqi Christians who are in need of sanctuary will likely remain until they get where their families are waiting for them and where they can form their own communities. Garabat and Juana, when asked what they desire for the future, answer in unison: peace. They also say they have no wish to return home. “The future is not in Iraq,” Juana says. “It is far away from there.”

Dominique Bonessi is a freelance journalist and fellow with the International Center for Journalists based in Istanbul. Muhammad Abunnassr, an Arabic-English translator based in Istanbul, contributed reporting.