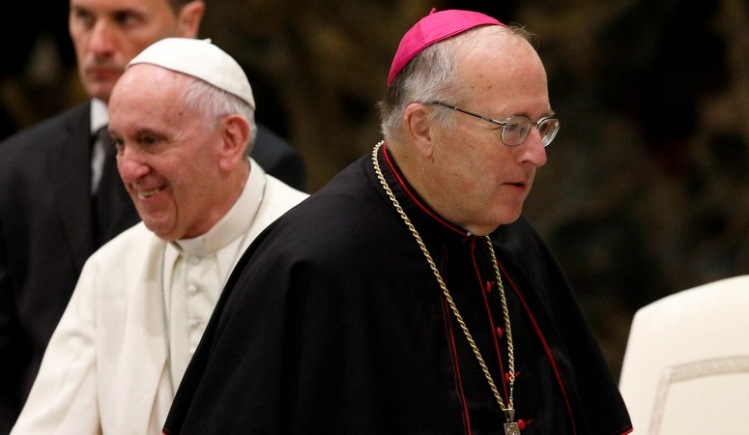 I will soon write a longer report about the first U.S.-gathering of the World Meeting of Popular Movements, where the bishop gave his speech and nearly 700 people met for panel discussions and small workshops at the three-day event organized by PICO National Network, the U.S. bishops’ Catholic Campaign for Human Development and the Vatican’s office for Promoting Integral Human Development.

In the meantime, Bishop McElroy’s address deserves its own careful consideration.

Appointed by Pope Francis to lead the San Diego diocese last spring, McElroy has quickly emerged as one of the most respected intellectual leaders of the Catholic Church in the United States with his incisive essays and speeches on immigration, inequality, the threat of white nationalism, and the church’s obligation to confront Islamophobia. During one session at the Modesto meeting, Bishop Oscar Cantú of Las Cruces, New Mexico, jokingly but accurately called McElroy “the brains” of the U.S. episcopacy. Along with other “Francis bishops” like Cardinal Blase Cupich in Chicago, McElroy is also at the forefront of pushing the U.S Conference of Catholic Bishops—in recent years most focused on fighting same-sex marriage and contraception coverage—to demonstrate greater institutional commitment to the breadth of Catholic social teaching and the pope’s priorities as they relate to poverty, inequality, and climate change.

Bishop McElroy took the stage in Modesto after a number of young activists gave impassioned talks that challenged Catholic leaders’ reticence to speak up about the myriad threats the Trump administration poses to immigrants, refugees, government safety nets for the poor, and the environment. The bishop thoroughly and resoundingly answered that challenge. His twenty minute speech can be read as a model for responding to the “signs of the times” through the lens of the Gospel, as the Second Vatican Council insisted, and skillfully summoning the richness of Catholic social teaching to make a compelling argument that was profoundly political but never partisan.

McElroy began by reminding the diverse audience, not all of whom were Catholic or Christian, that Catholics have long been at the forefront of social-justice activism. From “worker movements of Catholic action in France, Belgium, and Italy to Pope John XXIII’s call to re-structure the economies of the world in Mater et magistra, to the piercing missionary message of the Latin American Church, the words ‘see,’ ‘judge’ and ‘act’ have provided a powerful pathway for those who seek to renew the temporal order, in the light of the Gospel and justice,” he said. But at this “pivotal moment as a people and a nation,” the bishop warned that “our very ability to see, judge and act on behalf of justice is being endangered by cultural currents which leave us isolated, embittered and angry.”

Praising the pope’s encyclical on ecology, Laudato si’, which even before its release provoked criticism from conservatives inside and outside the church, McElroy said Francis was “unafraid to venture into this controversial set of questions about climate change and the environment despite the fact that massive social and economic forces, especially within our own country, have conspired to obscure the scientific realities of climate change and environmental degradation, in the very same way that the tobacco companies obscured for decades the medical science pertaining to smoking.” The bishop continued:

There is a lesson for us here, as agents of change and justice. Never be afraid to speak the truth. Always find your foundation for reflection and action in the fullness of empirical reality. Design strategies for change upon ever fuller dissemination of truths, even when they seem inconvenient to the cause. This is an especially important anchor for us, in an age in which truth itself is under attack. Now we come to a time when alternate facts compete with real facts, and whole industries have arisen to shape public opinion in destructively isolated and dishonest patterns. The dictum “see clearly the situation” has seldom been more difficult in our society in the United States.

The Trump administration’s surreal Alice-in-Wonderland qualities, where top advisors tout “alternative facts” and the president views mainstream media outlets as peddling “fake news,” clearly pose a unique challenge to religious leaders who are called to speak truth to power. We seem to live in a disorienting “post-truth” era that is even more alarming than the usual spin deployed by predictable commentators on the left and right. Trump routinely lies about subjects that only a deluded narcissist would lie about—whether it’s the size of his electoral victory or whether it was raining during the inauguration. McElroy names a problem that too few bishops or other faith leaders understand or are willing to tackle.

For Catholics in the pews and those who hold powerful positions in Washington—Speaker of the House Paul Ryan comes to mind—the bishop put quick work to anti-government and libertarian ideologies that have been embraced by many Christians on the right. The tradition of Catholic social teaching, he said, is “unequivocally on the side of strong governmental and societal protections for the powerless, the worker, the homeless, the hungry, those without decent medical care, the unemployed.” The bishop reminded his audience that these positions are not rooted in talking points from the Democratic Party or position papers from liberal think tanks. “The church’s teaching,” he said, “flows from the teaching of the Book of Genesis: The creation is the gift of God to all of humanity. Thus in the most fundamental way, there is a universal destination for all of the material goods that exist in this world. Wealth is a common heritage, not at its core a right of lineage or acquisition.”

McElroy acknowledged that when he tells people that the pope calls inequality “the root of social evil” and that Francis describes an “economy that kills,” many consider it an exaggeration, or as the bishop put it, “a form of speech.” At this point, he led the audience through a brief guided meditation:

I want you to sit back in your chair for a moment. And close your eyes, and I want you to think of someone you have known that our economy has killed:  A senior who can’t afford medicine or rent; a mother or father who is dying, working two and three jobs, really dying because even then they can’t provide for their kids; young people who can’t find their way in the world in which there is no job for them, and they turn to drugs, and gangs and suicide. Think of one person you know that this economy has killed.  Now mourn them. And now call out their name; let all the world know that this economy kills.

By now, the overflow crowd of organizers, immigrants and clergy in the Catholic high school gymnasium were on their feet. The bishop was just getting warmed up.

But we, as people of faith, as disciples of Jesus Christ, as children of Abraham, as followers of the Prophet Muhammad, of people of all faiths and no faith, we cannot merely be disruptors, we also have to be rebuilders. We have to rebuild this nation so that we place at its heart the service to the dignity of the human person and assert what that flag behinds us asserts is our heritage: Every man, woman and child is equal in this nation and called to be equal. We must rebuild a nation in solidarity, what Catholic teaching calls the sense that all of us are the children of the one God, there are no children of a lesser god in our midst.

For three minutes, the bishop received a standing ovation. Some wiped away tears, including me. In a meeting filled with progressive activists, some of whom openly expressed frustration with the Catholic hierarchy’s lack of urgency to confront Trump’s abhorrent proposals and policies, McElroy’s speech did what too few Catholic leaders have managed to do since the election. He used the formidable weight of Judeo-Christian tradition and Catholic social teaching, rooted in respect for the common good and human dignity, to draw a bright moral line in the sand.

The question now is how many Catholic bishops will step up and do the same.