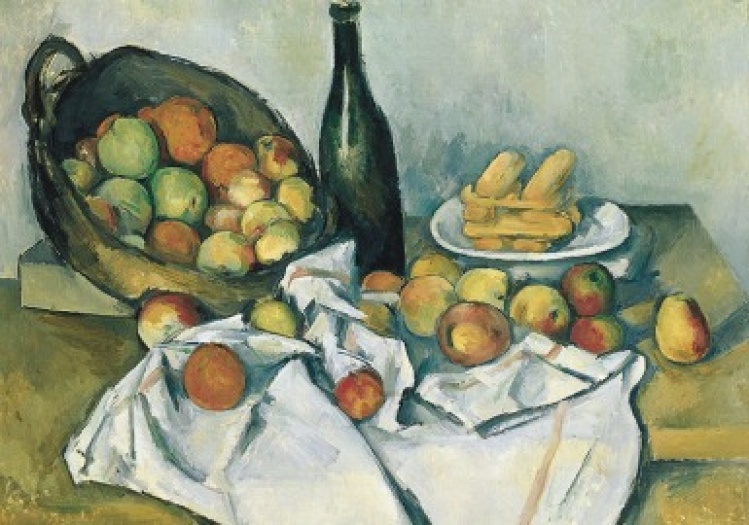 The supermarket, that cornucopia of modern life, has no greater gift to the shopper than the apple. Tiered bins of Granny Smiths, McIntoshes, Fujis, Braeburns, and Delicious, among others, coyly wink at us—they would not be out of place in the Garden of Eden. Their rich colors make that first big bite seem almost inevitable. Even if few of us still believe that the world began in 4004 B.C., the Fall, as described in the third chapter of Genesis, continues to have a strong hold on our imaginations. “Now the serpent was more subtle than any of the beasts of the earth which the Lord God had made….”

The Old Testament (Douay version) tells us that Adam and Eve were allowed to eat “of the fruit of the trees that are in paradise,” but not of the fruit “in the midst of paradise.” It was the “more subtle serpent” that showed its wiliness by asking Eve why she and Adam couldn’t eat “of every tree in paradise.” Under the circumstances, perhaps an unanswerable question. We know what happened next, and from that first misstep have come not only Original Sin but also our first fashions in clothing. First it was those fig leaves, then God made Adam and Eve “garments of skin.” After that the plot really thickened. Cain and Abel were not far behind.

Neither the Douay nor the King James version of Genesis specifically speaks of apples as the forbidden fruit. According to some early writings, the fruit in the Garden of Eden was a grape or a fig, even wheat or palm. How the apple, rather than the grape or the fig, became the fruit in the Garden of Eden is complicated, involving, among other things, pagan Greek mythology, folklore, and ancient vase paintings showing serpents wrapped around apple trees. A linguistic accident confirms the association: the Latin word for apple, malum, can also mean evil.

Art, more than anything else, has helped give the apple its pride of place in our Edenic imaginations. Such fifteenth- and sixteenth-century artists as Albrecht Dürer (some of whose famous paintings and drawings of the Fall can be seen at the Morgan Library & Museum in New York) or Lucas Cranach the Elder (whose two paintings of Adam and Eve facing each other can be seen at the the Art Institute of Chicago) are more interested in telling the story than in the apple itself. In Cranach’s paintings we notice Adam’s pensive eyes and Eve’s coy look rather than the bitten apple in her hand. The apple is almost a minor prop, neither delectable nor tempting. Our attention is held by the event itself, and our eyes search for and find a serpent entwined around a tree branch over Eve’s head.

It was in the nineteenth century that an apple worthy of the Garden of Eden made its appearance—and at a time when old beliefs and practices were dying. No other painter has so enlarged our feelings for the apple, or so complicated them, as Paul Cézanne (1830–1906), who told an admiring critic that he wanted to astonish Paris with an apple. He succeeded, astonishing more than Paris. One of his paintings, The Basket of Apples (c.1893), shows about thirty apples. Another, The Big Apples, painted between 1890 and 1894, has six apples rising in a pyramid on a blue plate, with one-and-a-half apples to the side. Still another makes just two apples as exciting as the discovery of new planets. The colors and shapes of all Cézanne’s apples bewitch, glow rather than shine, tempt the mind rather than the appetite. Even when they resemble the color of peaches or oranges, they beg to be visually caressed, not eaten. In his essay “The Apples of Cézanne,” the art critic and historian Meyer Schapiro wrote, “In paintings of the apples he was able to express through their more varied colors and groupings a wider range of moods, from the gravely contemplative to the sensual and ecstatic.” Artists like Dürer and Cranach set the table, but Cézanne provided the fruit and gave us a feeling for the temperature in the Garden of Eden.

I often have a hard time selecting which kind of apple to buy. Maybe it’s all that seductive waxing, those overhead lights, or memory’s faulty taste. Our first parents didn’t have that problem, but the bigger one of deciding whether they “shall be as Gods, knowing good and evil.” Today we like to think we know the difference between good and evil, though the wish to be as gods is no longer part of our pantheon. Perhaps we should, like the poet Dylan Thomas, just wish to feel “young and easy under the apple boughs,” and leave it at that.