Where Familiarity Breeds Respect
By Christopher Thornton
The Last Word 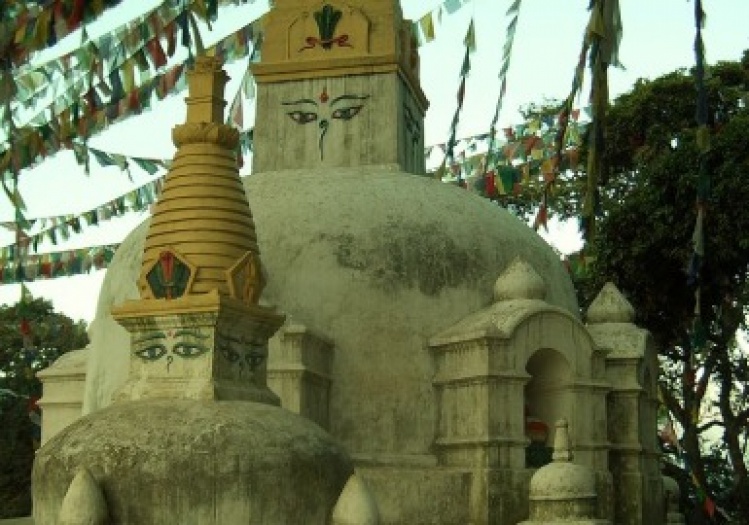 On a late December afternoon in central Kathmandu, children fresh from the confinement of classrooms play in a courtyard, called a chowk in Nepalese. The girls have strung rubber bands together to play an elaborate version of cat’s cradle. The surrounding buildings resonate with the sound of their giggling. The boys furiously kick a soccer ball between improvised goal markers, one of which is a small Buddhist shrine that stands in a corner of the chowk. Their shouts punctuate the girls’ laughter.

These are ordinary children playing after an ordinary day at school, but this is no ordinary chowk. Dominating it is a four-sided mound called Kathesimbhu Stupa, which is a sacred site for Buddhist pilgrims. They walk around it clockwise in representation of life’s circular nature. Most of the children probably know little about this, since Nepal is about 80 percent Hindu. But a few of the children are probably Buddhist. Does it matter? Not here, and not in most of Nepal. In fact, they may still know nothing of the sectarian conflicts that have torn the social fabric of countries all around them. To the south, animosity between Muslims and Hindus continues to fuel a deadly and futile cycle of violence. In 2012, in not-so-distant Bangladesh, two hundred thousand Muslims needed state protection from a rampaging mob of Buddhists.

Not far from Kathmandu are the snowcapped peaks of the Himalayas, but far below, the Kathmandu Valley is studded with temples and shrines, some Buddhist, some Hindu. It would be hard, if not impossible, for most visitors to tell if any faith was dominant here. Hindu shrines are prominently placed in neighborhood squares, where local vendors set up shop to profit from the gods’ proximity. Buddhist stupas offer retreats for meditation in the quiet chowks removed from the chaos of Kathmandu’s streets. Overlooking the city atop a steep hill stands Swayambhunath, the largest stupa in Nepal. On the other side of the city is Pashupatinath, a venerated temple complex where Hindus cremate their dead and push the ashes into the Bagmati River, which flows into the Ganges. Some of these ancient monuments show signs of damage—not from religious strife but from a ferocious earthquake that rocked the city in 1934.

Nepal has not been immune from violence and instability: the decade-long Maoist rebellion that ended in 2006 left fifteen thousand Nepalese dead and forced those who lived in rural parts of the country to flee to the city, swelling Kathmandu to the breaking point. But, though there were a few reports of Buddhist priests being harassed and Buddhist temples attacked, the conflict never became a sectarian war. In the end the rebels were victorious and a “people’s republic” was declared. A new constitution, drafted in 2007, proclaimed Nepal a secular state. Freedom of religion was guaranteed, and the word “Hindu” was removed from Nepal’s formal name; the new “Kingdom of Nepal” represented all Nepalese—not only the religious majority.

Religion is in no danger of vanishing from Nepalese life. Christian aid organizations are allowed to operate schools and health clinics, and, though proselytizing is prohibited, religious conversion is allowed and officially recognized. On the Nepalese calendar, Hindu festivals are national holidays, but so is the birthday of Siddhartha Gautama Buddha, and government employees—Buddhists, Hindus, or Muslims (just 4 percent of the population)—can be excused from work on their religious festivals.

Ripu, a Hindu, works for one of the many guide services and adventure-travel agencies that pepper the cramped, dusty streets of central Kathmandu. I asked him whether he had been required to study other religions in school.

“We didn’t study religions in the formal sense,” he said, “but the teachers would take us on trips to visit temples and mosques, so it never felt strange to go into them…. In our culture, whenever we enter someone’s house we always take off our shoes. It’s a sign of respect. It’s the same when entering a temple or mosque. And we would never say someone isn’t allowed into our houses, no matter who they are. A guest is like a god.”

It’s sometimes assumed that religious intolerance is a natural tendency that modern liberal states have to correct, or suppress. But after one has spent some time in Kathmandu it begins to seem more like a deformity—a departure from the healthy and largely spontaneous norm. Children here don’t have to be weaned from sectarian hatred and suspicion because it is something they are never taught. Here, where Hindu children play football in the shadow of a Buddhist shrine, familiarity breeds respect, not contempt.

To Catch a Thief